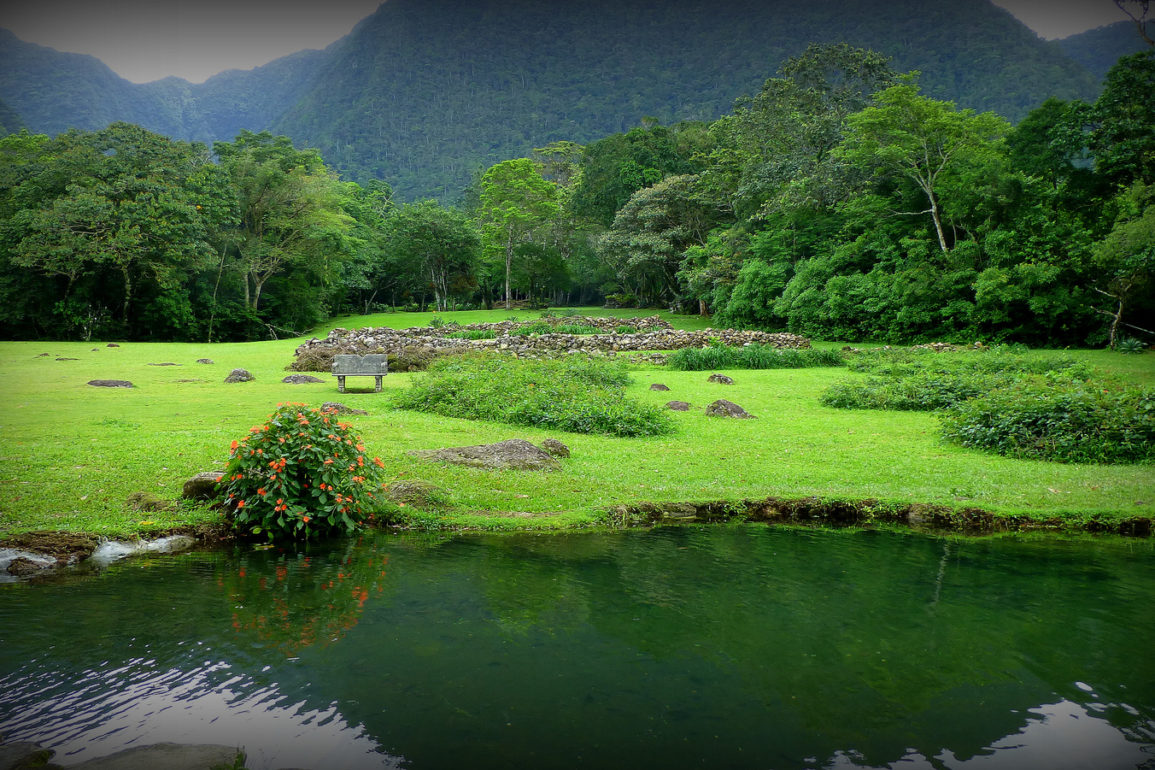 The Garden of Eden in Exile

I used to visit a small town in Panama each year called Boquete. It’s one of the more beautiful places on earth. It’s winding country roads surrounded by cloud forest jungle, rivers, coffee plantations are just one insight. Behind each corner is a breathtaking panorama.They host an annual flower festival there. It rests in a valley surrounded by mountains. There is an extinct volcano in the distance.

In the town, the Indians live in chicken shacks without doors. Each shack is the size of a walk-in closet. You can peek inside as you pass by and see the blankets carpeting the floor. The women wear large flowing dresses of color, Peruvian like, and carry baskets on their heads. They never make eye contact, as if adrift in another world, but perhaps it is we who are asleep in dreams. Many German, English, and American ex-pats have moved there over the recent years changing its real estate and landscape. They want to own and consume its beauty, but as my father once wrote in his poetry: “That which the hand has plucked, the heart has missed.”

Boquete is one of those places that never leaves your imagination.

I have a variety of stories from my visits there, but the story I’ll share is about going to a Rainbow Gathering off the Caribbean coast. Actually, it’s not about the small hippie retreat itself but about my journey getting there.

I don’t glorify or idealize anything. The ordinary is holy to me. I have a hard time committing to political certainty, knowing that truth is something beyond ideas promised and rhetoric. I’m not an advocate of drugs, which are infamous at Rainbow Gatherings. I’ve seen how they destroy people’s lives. As an artist I typically argue against the mythologizing of creativity and drugs.

While hanging around Boquete, I had heard there was going to be a gathering on the east, Caribbean side of Panama, and decided to go. The gathering attempted to be discreet and hidden away in a remote forest. This helps provide those attending with a sense of escape and peace. Getting information on the location of the gathering was word of mouth at specific checkpoints, where you were given more directions to more checkpoints until you arrived. Although typical Rainbow Gatherings attract thousands of people, this particular gathering was going to be very small.

I had set off to a far town east of Boquete where there was an address I needed to find to get directions to the next checkpoint. That night, myself and a dozen bohemians spread our stuff around two rooms of an old barber shop and slept on the ground. A local had invited us to sleep in his shop. The rooms were covered in mirrors with buckets of scissors, brushes and hair dryers. I slept under the canopy of a barbers chair.

In the morning we loaded the “buses,” which were more like pickup trucks with guard rails around them. We piled in with a few locals. The drive was a few hours. We left town and ended up cruising through rich mountain ranges.

The drive was beautiful beyond words. Winding roads surrounding by growing mountains and the ocean in the distance. We arrived at a river near the coast. There were other travelers there waiting with local boat drivers. I overheard a bit of Hebrew being spoken. There were taxi rowboats, long like bananas. We loaded on the boats by 3-4 people. Our boat had water coming through the wood. The boat driver said we could use a little bucket and empty the water from time to time for him.

The river started out very narrow at first but widened as we went further. The ride was at least 2 hours down the river. Along the sides of the river there were bluffs which grew higher and higher. Along the bluffs were homes with local families waving to us as they sat with with their dogs and farm animals. The river waters got a bit more wild as we got near the ocean. At the end of the ride, the river widened and its mouth kissed the Caribbean Sea. Dozens of people from a small town at the edge of the river rushed in the water to help grab the boats. I have no idea how this was all planned. The village sat on the ocean front. About 100 people stood there greeting us. The local townspeople were as curious as we were. Families, kids… This route was the main route to their homes. I got the sense that visitors like us weren’t so common.

We dropped our things on the ground and were told we would camp over night there. Someone turned on a loud radio and all the townspeople started dancing.

I walked around the small town. There were a few dozen small stucco houses. I peaked inside the windows and was shocked. I saw gigantic TVs, 60 inches at least. In the center of the village, there was a town church that appeared really wealthy, as if tons of money was poured into its architecture. I started to notice many young men dressed like they were from south Chicago or Brooklyn. They wore sports team hats to the side, pants sagging a little, and they had lots of gold around their necks and heavy rings on their hands. The town was so far away, so remote, I couldn’t imagine how the economy worked and where their money came from. There was a contradiction of poverty and wealth. Where did the large TVs come from? I figured they watched American TV on their screens and somehow bought the same costumes that we wear. While chatting with a community leader, I was unclear of his position, perhaps he was the priest, I asked how the young men got common access to American culture and how their church was so…lavish. And that’s when he explained that the townspeople found numerous large bags of cocaine washed up on shores of the village. He explained that Panama is just north of Columbia, one of the world’s drug export capitals. The drug dealers would travel along the coast by boat and authorities would intercept them via helicopters at which point the traffickers would toss the illegal packages into the water. The immensely valuable packages would wash up on the village shores. The town would sell the “goods” on the black market and use the money as a community fund for the church… and some other things it seemed. It reminded me a little of the movie The Gods Must Be Crazy, where an African tribesmen finds a coca-cola bottle after it falls from a plane and hits his head. He somehow decides it’s from the heavens and travels far and wide on a divine mission with it. Only this time, the gods sent cocaine to help fix up the church.

In the evening the town threw a dance party. Everyone gathered under the tent like structure. The floor under our feet was earth. They blasted some loud speakers, perhaps also a fancy gift from the gods, playing Reggaeton. A small bar opened serving soda and beer. Everyone danced with joy in this forgotten village on the edge of the world. I lay under the stars listening to the ocean waves crashing and contemplated how absurd it was that a town amidst the most beautiful and peaceful scenery, a Garden of Eden, chose American pop culture. The ocean and the forest grew boring. They wanted NY in a sense. As we traveled to them to escape ourselves and our culture, they were escaping towards us. I thought about people who want to trade landscapes because they believe they can escape time as a cultural product and access some permanent serenity, but instead find themselves amidst another cultural matrix.

In the morning we took off walking along the shore for about two hours to our final mysterious destination. I walked between coconut trees and the ocean on a narrow passage of sand. As we walked, there was an endless flock of butterflies swarming past us the entire time. They flew around my head, landed on my shoulders and my legs. A nature guide later told me it was possibly the monarch butterfly migration caused by the storm El Nino.

Spirituality is finding what is real within the shifting tides, to be like a butterfly who’s changes and migrations are in sync with a deeper structure of time, and whose track upon the earth is not a denial or conformity, but something central to its essence. Until we find that, everything else, even a magical segment of earth, remains in exile.

The ocean crashed at our feet while we walked and walked. The butterflies carried us.

There is no culminating ending I can tell you about. I’m still traveling.