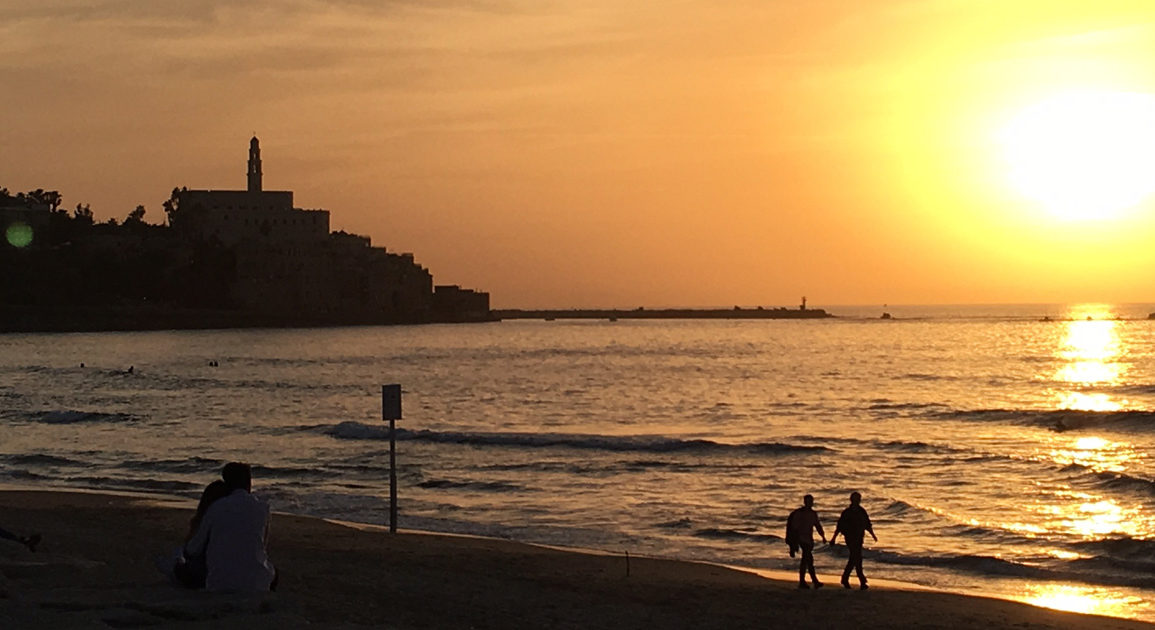 A Disturbing But Profound Interaction With The Other

Old Yaffa looks regal and mystical from the water’s edge on the Tel Aviv beach, my sneakers sink into the wet sand while foamy waves wash over shells and sea glass, gently reminding me of the ebb and flow of life. The flamboyant and setting sun bathes the ancient port in the near distance in an amorous glow that I want to last longer, that I want to carry with me home.

I snap photos on my iPhone and people stop in their tracks along the massive, beige boulders outlining the boardwalk, gazing west to find their moment of spiritual union with the world in that moment when nothing else seems to matter. I make my way up to a wooden bench along the boardwalk and take a few deep, deliberate breaths. Being in the moment.

And the moment is almost perfect.

In front of me, between the bench and the sunset, stands a small-bodied black man carrying an oversized and torn plastic bag that might hold all his belongings, a blue knit kippah on his head, wrapped up in a black winter coat that seems to reach beyond his knees, like a protective cape. He is not facing the sunset like the rest of us, but looks alternately up toward the sky and down to his hands, swaying, mumbling to himself, small bursts of laughter between what might be supplications. Then he looks at me, laboring to focus, his knees slightly bent as if he could easily slide to the ground and take a nap or pass out right in the spot where he is standing.

I make one mistake. I don’t look away, and our eyes meet. The little, sweet, but obviously troubled man now has a friend; someone who doesn’t ignore him or look away in disgust, but who sees him, even if just for a split second. That is the warm glow he notices that moment, that is what matters to him. He wants to talk, to tell me his story, to sit close to me. In his state, he does not know boundaries, and as the waves of alcohol odors flush against my face, I try to smile, to validate his presence, his effort to reach someone.

The sun sets, but I don’t notice the moment when the glorious light dips below the horizon, because while I am listening to the 34 year old man trying to tell me about his life, it happens in the blink of an eye. We speak in Hebrew, and he tells me he was born in Ethiopia and that he was one year old when he arrived with his parents. I think about Operation Moses, the covert Israeli evacuation of Ethiopian Jews from Sudan during a famine in 1984, and about the difficult lives these Jewish refugees have been faced with, both before and after their arrival in Israel.

He speaks of siblings who have jobs, but he mumbles half the time and uses some words I don’t know yet, and occasionally he sighs, puts his face in his hands and rubs his eyes, or picks his nose, or giggles. He does not ask for money; he does not act aggressive; he is just emotionally clingy. I notice a deep, long scar on the side of his head, no hair able to grow in its shiny tracks, trailing the contour of his ear. After a while with a lot of his incomprehensible mumbling I decide it’s time to end the love affair.

I say “Nice to have met you, but I have to go, I’m meeting a friend,” as I pat him on his back, secretly hoping he won’t try to reciprocate with any physical contact.

But he does, he leans in, he takes my hand, he wants to kiss it. I pull it back and I stand up to leave. He stands up as well, and as I walk away, he follows me.

I should have known that he was in no condition to read social cues or understand when to let go.

He giggles again and follows me closer, calling out. It’s getting dark and some of the passerby’s turn to look at what’s happening. At this point I feel badly for having engaged with him, a little unsettled about being followed.

Creeping at a slow pace along the path behind us is a beach patrol car carrying two police officers, looking for law and order. An older woman sitting on the bench next to where we sat and who I’ve noticed has kept a furtive eye on the whole situation, flags them down alerting them that the man is being bothersome. They hop out of the car and stop him, asking him questions, then turn to me to ask what’s up. I explain. They ask him to leave me alone.

I feel guilty as I walk away, but then I hear him following me again. I also see the lights of the patrol car as they creep along after him. I increase my speed, hoping they will make sure he stops following me while not being too hard on him. Eventually his footsteps dissipate from my hearing, and I feel free to move on without worries or inconvenience. I hope they can help him, but I know they won’t.

I am free again to move about unhindered, and follow the urge to have a drink. Stepping into a hip beach spot I order a “Catcher in the Rye.” While the golden potion soothes, I feel strangely privileged, and reflect on the light no longer visible on the horizon. I think, the light we see as we live our days observing the world around us and which has the ability to linger and feed our creativity long after it’s gone, can have many sources.

As much as I enjoy the inspirational beauty of a haunting sunset, it’s the little Ethiopian man’s presence that leaves me moved that day. Here one moment, then suddenly gone, never to reappear in the same encounter, his being with all its problematic flaws, odors, and consequences, pushed me toward this. I think about how the importance of the Other, even the “undesirable” other, can never be dismissed in the life of a writer. The light as I imagine it in the spirit of the 1-year old refugee that once came from Sudan and Ethiopia to Israel still shines through, and I would have liked to thank him for sharing that with me.