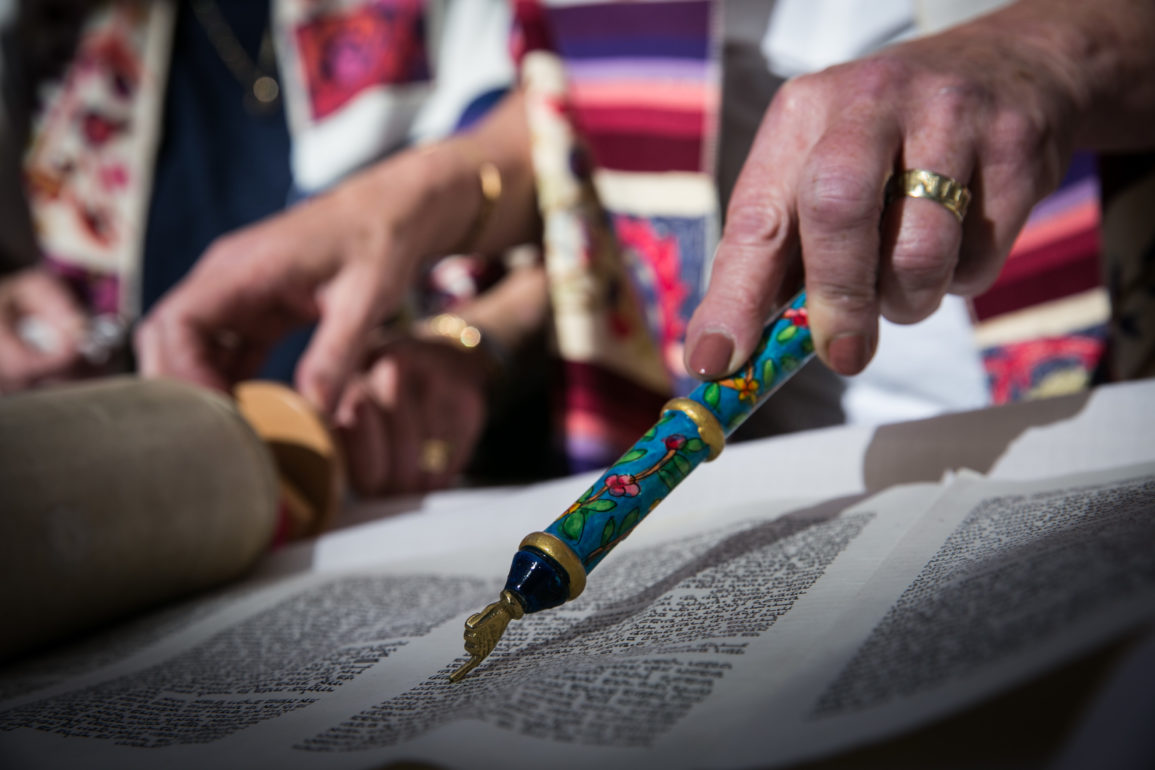 It’s always been so beautiful. The one time of year when the men clear the room, and we women circle around the bima in our offering of song and rhythmic swaying. It’s a respite, a deep reckoning as we are welcomed to take up all that space with the song of our prayer-presence.

Eventually, the niggun dimmed, one woman took her position at the bima, and she read the last Torah portion of the year, zot habracha. A ritual that I had always found so reassuring and validating suddenly went limp as I noticed for the first time, there was no bracha recited for this Torah reading. We would greet the Torah with song, but not blessing.

Something started to drain from my body. Maybe it was a hopefulness, the comfort and safety that this community holds me in, or the way this ritual once satisfied and nourished me. But all I could feel in that moment was how this was not enough. No bracha means no legitimacy, and this ritual quickly began to feel more like an attempt to assuage rather than a validation.

I continued to harmonize with the song, it’s my favourite, most impulsive part of singing. It’s the improvisational collision of our different sounds that make such beautiful music, but every now and then, I’m off a note, I jump too high an octave, and I pause, a bit embarrassed by the ugly sound. Eventually, I always move on again, trying to make it all sound pretty.

The reading was read, a “different” version of the mi sheberach was recited, and in just a moment they would usher the men back in and begin the reading of breishit. But for our final, female, adieu, the Torah scroll was left open on the bima and an invitation extended for us to come up close, and one-by-one, take a peek.

My body stopped swaying, my singing no longer in harmony. I stood there, frozen. I watched as my friends huddled around the bima, in delight, in ecstasy. Their eyes and hearts thirsty for a glimpse of this most sacred epicenter of our faithful lives.

I remember a few years ago when I lived in Brooklyn, and offered to help organize my shul before Rosh Hashanah. It was the usual reshuffling of chairs, a hopeless scrubbing of kiddish coffee stains. Amongst our many tasks, the Torah needed to be taken out and rolled to the beginning. As I write this, I’m confused and wondering where exactly we roll from and roll to, where we finished reading and where we begin again. I have no idea. Just like I had no idea then as I watched a 14-year-old boy move with such agility in his handling and familiarity of the Torah.

“Oh I know this part,” he got excited. “This was my Bar Mitzvah parsha,” and he sang with the words that gazed back at him. He did this with confidence and ease, like he was navigating through his home.

Though I was reciting a hundred brachos a day in fifth grade, memorized all of ha’azeinu by eighth, and could list all the nivi’i’m before I could drive, I never had any business in that scroll. It was not home.

Last week was the first night of Sukkot and I was just leaving the house of a friend as we stood in the doorway arguing about egalitarian minyanim.

“If they want to be counted, then they should show up ALL the time! Do YOU see women in shul three times a day?! First let’s see them make a commitment and then we’ll talk about being counted in a minyan. But either way, they don’t have a chiyuv.”

There were “because’s” and “there-fores”  but it was late, and I was tired, so we left.

But as we walked home, my partner and I, I became incensed, and that conversation in the doorway began to grow bigger, with voices other than my own. I heard the women of nearly a century ago in protest for their rights and I hear a cavalier response; “You must show up three times a day at this voting booth to prove your allegiance to your country,” she is told.

But recognition is not something to be bartered for. Equality needs no proof. The extent of one’s commitment and their right to participate are mutually exclusive. And if commitment is the tool of determination, why is it that a man can show up once a year, or never, but he will never need to prove himself?

“What a weird conversation that was,” he said.

And yes,  there’s a multitude of egalitarian minyanim that I can join, I have about 3 different options within 15 minutes of my home. But that space doesn’t feel easy either. Maybe it’s the grounding weight of tradition, maybe it’s the safety of familiarity, I’m not sure. All I know is that there, in tradition, I find both beauty and hurt.

I had my own set of arbah minim for the first time this year. My partner and I went to the pop-up sukkah market, the one right across for the shuk. He was so excited about it, the hub of energy and the fervorous hunt for the most perfect esrog. I marveled at the scrupulous eyeing, the gentle handling, the dedication to beauty.

One, in particular, caught my eye. I let its weight rest in my cupped hand, noticing how perfectly it fit. “Do you want it?” he asked.

“This one is really expensive, I can just use yours.”

We agreed to meet up a bit later after running our different errands, and when we did, he came with two sets of arbah minim. He had gone back to get my esrog. I didn’t realize until that moment how much I wanted it.

So while I’ve done this waving ritual for all the 26 years of my life, this time, it felt like a first. With my own set, I felt a responsibility towards them, to know them. I felt close.

So I came prepared and read up on the different meanings and intentions that wait to be unpacked, like in all ritual. A tender reminder that the divine lives in our simple things. In palm branches and citrus fruits, in cups of wine and sourdough bread.

I wonder what Purim would look like if women weren’t obligated to read from the Megillah. What Peseach would be if the mitzvah of eating matzah were only for men.  There’s something very deep about being called to task. Perhaps it’s just the “being called.”

I left shul this Simchat Torah heart-broken. The image of all those women, my friends, myself approaching the Torah with hesitance and excitement, like a tourist, unfamiliar. This moment, so precious, the one time a year we have the chance to get a good look, this moment, so disturbing. And I realized once more that we, that I, are still not home.