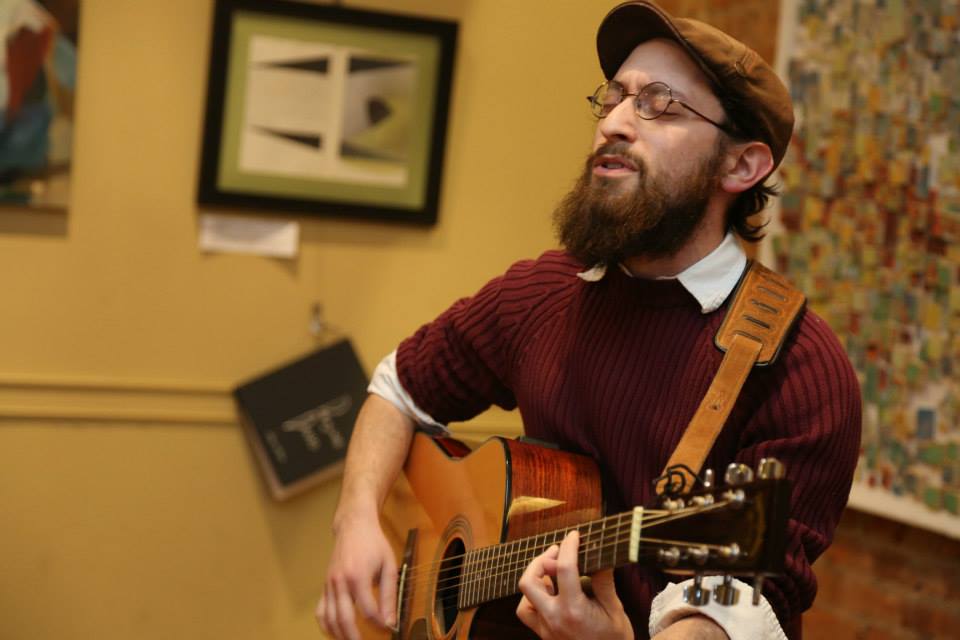 He Tried To Quit Music, But God Said No

“This isn’t a miracle,” he warns me, the first thing he says. “I can tell you the story of how it happened. But there’s some interesting stuff that happened before, that happened after — well, I think it’s interesting. I’ll let you decide.”

That’s Alan Jay Sufrin talking. He’s one of my favorite musicians. Alan is equally comfortable when he straps on an acoustic guitar as when he takes a bunch of keyboards and computers and makes some ridiculously danceable electropop anthems. He calls himself “the short Jewish Prince” — the singer, not the royal status — although he’ll usually follow it up by saying something like, “Well, Prince is also short.” In any case, the two have a lot in common: they’re both inspiring, both incredibly prolific, both can take the simplest tune and build it into an amazing anthem that sticks in your head for days and that you never regret having there.

Alan’s also one half of the pop group Stereo Sinai, with his wife Miriam Brosseau. They came out with two amazing albums that took Biblical verses and stories and Psalms and turned them into really wonderful pop songs. Then Alan started writing some of his own original stuff, possibly as a side project, possibly as the next phase of his career — and then he stopped making music entirely.

“Two weeks before Rosh Hashanah, I went to pick up  my son — like, physically pick him up, the way I always do. My left wrist gave out. I was in a lot of pain. I didn’t think much of it, I thought it would just get better or whatever — I guess that’s just my M.O. with that kind of thing. It didn’t seem really serious, but it got worse when I did routine tasks over the next few weeks.”

He bought a wrist brace at a pharmacy, hoping it’d alleviate the pain. He wore it all day, every day. His wrist didn’t get worse, but it didn’t get better. After visiting a couple of doctors, Alan went to a specialist, and got a diagnosis easily enough — it’s a relatively common ailment called De Quervain’s Tenosinovitis. Here’s Alan explaining it:

“What the doctor told me was, we all have tendons in our wrists, but there are also muscles there. When you use your muscles a lot, it exercises those muscles. Your muscles should be doing the work. But when you stop using those muscles, the tendons have to start picking up the slack.”

In other words, Alan had been doing a lot of strenuous labor, playing guitar hours each day for years. And when he stopped, his body literally didn’t know what to do about it.

But why did he stop?

“It wasn’t a for-sure thing in my mind that I would stop playing music,” he told me. “I stopped playing at first because I’d become a full-time stay at home dad, and I had all these other things to think about. I’d just moved to New York from Chicago, and I wasn’t being a producer because I didn’t have any clients around to produce. I listened to music with my son, we had a dance party every day, but music had taken on a passive role, not an active one. And I tried to find new music to play for my son every day, but I didn’t like the music I was finding. It was boring to me.

“I’d been in that frame of mind for a couple of months by the time I saw the doctor, and music was very far from my mind at that point.” And it didn’t occur to you at all that it might be the reason your hand hurt?

“Not until I was sitting in the doctor’s office. I told him, and he said that’s definitely what caused it. So I said, if I start playing guitar again, would that heal my wrist? He did two things — he still wrote me a prescription for phys therapy, but also, he told me to play guitar every day. Just start with a little, 15 minutes, no more, and gradually build up more and more until the pain is gone.

“I remember waiting for the elevator with these prescriptions in my hand and realizing that, if I want my wrist to get better, I’m going to be playing guitar every day again. And I thought, this means something. It was sort of a moment when I realized I needed to not kick music to the curb so quickly. The way I believe, there’s no such thing as coincidence, and that Hashem has a plan for everyone. There was a time that I was 100% convinced that Hashem put me on this planet for the purpose of music production. I felt very driven in that direction. By the time I reached the street level of the elevator, I couldn’t believe I had ever stopped, and I couldn’t understand why I stopped.

“After the appointment, I realized that I’m not very active on Facebook, but here’s a clear opportunity to make a kiddish Hashem,” to publicly show G-d’s greatness. “I wrote a very short Facebook post about it, thinking like, if there’s any reason for Facebook, this is it. And I left it at that.

“Since then, I’ve been thinking more and more about why I stopped in the first place. It was a lot of excuses. If I didn’t have clients to produce, it’s easy not to make music. If I don’t have time. If I don’t have a positive way of looking at music, then I’m going to think negative thoughts about making music or even listening to it. Music just became a negative thing for me. What I guess I’m trying to say is, it was a backwards way of thinking about it. I was hearing boredom in other people’s music, but really it was me who was being the boring one.”

I tell Alan that it reminds me of the tale of Black Wolf, a story told by Shlomo Carlebach. (The live version is really long, but it’s so worth it.) Shlomo says, we reflect what we see in other people. We’re really seeing something about ourselves that we don’t like. If we think other people are disgusting or ugly, then, says Shlomo, mamesh, you’re ugly.

Alan hasn’t heard the tale, but he agreed. And let me not cut in too much more, because Alan’s story is so great:

“The end of the story, as it is right now — I’m a very practical person, at least I think I am. At a certain point it became clear to me, if I’m going to be back in music, what exactly does that mean? I don’t have a lot of time. I don’t have clients to produce right now. So I’m back to being where I was when I started. I’m just a singer-songwriter. I’m just trying to lay some tracks down, take a song, make it something I like — it feels like I’m starting completely from scratch. This message that Hashem was trying to tell me, I need to be playing guitar, I need to listen to music and playing music, I’m taking it as much as I can to be a new beginning. My hand is relearning the instrument, but my heart is relearning the love for the thing and my mind is relearning the whole process.

You’re My Medicine, Open up and Let Me in

And he’s doing it. This is Alan’s most recent concert: a couple of friends gathered round, Alan playing an old song called “Superhero,” accompanied (or interrupted) by a special guest star:

There’s just one more part I want to add, a postscript (actually, an inter-script) that I asked Alan about afterward. It turns out that, during his temporary retirement, he did give one concert. We’d gone together to see the Biala Rebbe of Boro Park, to have a sort of guidance/learning/powwow/mystical advice session, and, on the Rebbe’s request, Alan returned on his own.

“I went by myself because I was going through all these creative changes, finding a way to bring in a little extra income, and one of the paths I was considering, I wanted to ask his advice about. I walked in and I had the brace on my wrist. He didn’t say anything about it. His son, who at some point came into the office, his son pointed it out.

“He asked what happened and I gave my standard answer, which at the time was, I woke up one morning and I couldn’t move my wrist. He said I should have a refua shlayma,” a complete healing, “and then when I asked the Rebbe about that other possible creative path, I expected him to say either, ‘that’s good,’ or ‘That’s not for you,’ but he didn’t. He said, ‘That would be really hard’ — and he gave a lot of practical advice about why I might want to avoid it.

“I felt like I was going to leave there with a despondent feeling, like, now what do I do? It was around Yom Kippur, and the Rebbe said, I’m having a meal in the Sukkah, I want you to come and play your guitar for me. He didn’t outright say this, but afterward, it felt like, ‘Don’t do this thing you were planning to do’ — he didn’t say that, of course, but he saw that I was a little down about it and not sure what to do, and he said ‘Come play guitar’ — which I realized later, was sort of him saying, this is what you should do.

“And I did, and it was amazing. It was so much fun. He invited me back again later in the week for Hoshana Raba, he was having a big breakfast and he wanted me to play more music. I couldn’t make it for that one, though.”

The music is coming back — slowly, but it’s coming. Alan’s played me one of his newest songs, which isn’t ready for public broadcast yet, but might be my favorite thing that he’s written. It’s called “Energy,” and it’s about (I think) hope and depression and trying to believe and getting swallowed up by the utter crowdedness of New York. And it won’t sound the same as his older stuff, but that, I guess, is sort of the point of it. He’s moving forward. And he’s getting over the pain.

Photos by Saul Sudin, except the crappy job on Instagram which is all me.