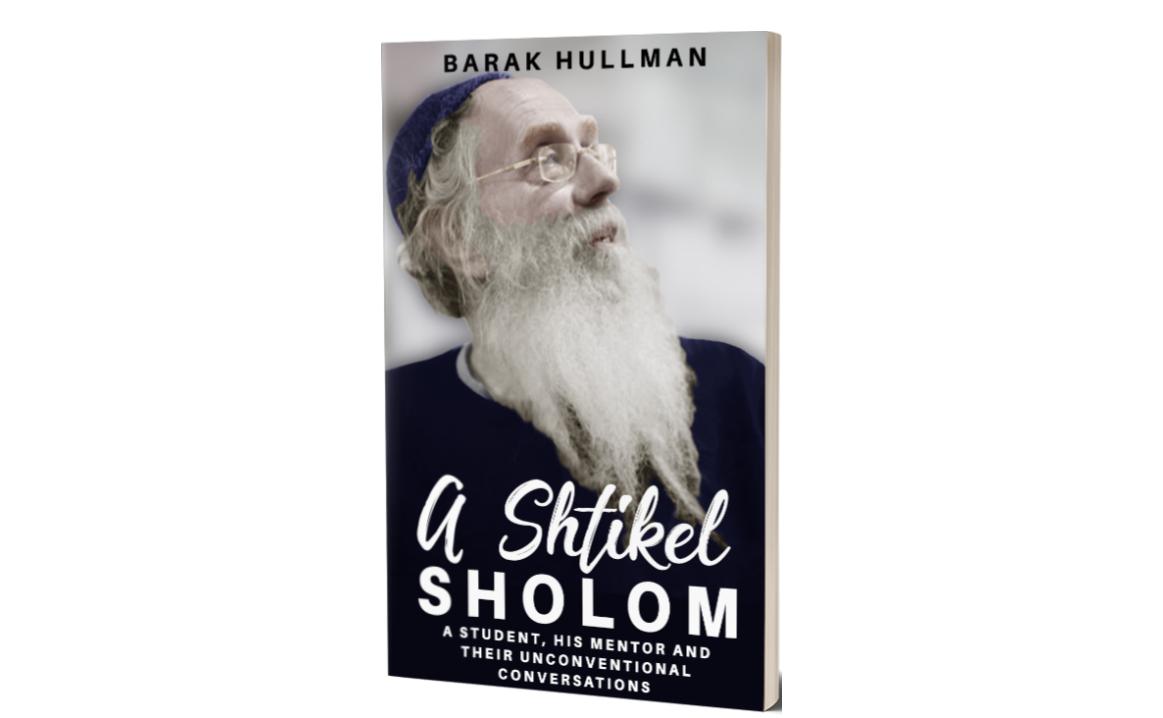 Sholom Brodt Was Not a Tzaddik

When wine goes in, the secrets come out. In A Shtikel Sholom (buy it) (or amazon), a new memoir of stories about his teacher and mine, Sholom Brodt, Barak Hullman writes about a drunken Simchas Torah they spent together.

“When you die,” Barak said to Rav Sholom, “everyone is going to say, ‘Oh, what a great tzaddik! Such a big rabbi!”

Sholom, who was, at these times and most others, playful and mischievous, turned hard and sober.

And Sholom, who was always thinking about G-d, who spent pretty much every moment I’d ever seen him doing things for other people, going out of his way to be kind to the students in his house and tolerant to the neighbors who swept in and ate his food and filled his rooms and stayed all hours of the day and night, maybe approached sainthood in a way that most of us wouldn’t dream of, or want to.

But he wasn’t like that. He wasn’t even a hidden tzaddik. He was a tzaddik in denial. He had such gorgeous, perfect faults. He was so good at being human.

“When you die,” Barak said that night, “I’m going to shout at the top of my lungs, ‘Sholom Brodt was not a tzaddik!’ That’s going to be my final gift to you.”

In the years after, Sholom would remind him of his promise. Years later, when Sholom did die, Barak said to his wife, “What am I going to do? I promised him.” You can’t, she said. People wouldn’t understand. And Barak said, “It’s a once in a lifetime deal. Do you think Sholom would want people calling him a tzaddik?”

So at the end of the funeral procession, after everyone spoke, when the assembled company was about to dissemble, Barak stepped to the front. He said what he needed to say, what he’d promised Rav Sholom all this time ago.

A Shtikel Sholom is friendly in the most intimate of ways. It doesn’t have deep secrets, but it has plenty of shallow secrets, the moments that you only share with the people who know you better than anyone else, better than you know yourself.

It’s the reason I felt repulsed when I first read it. Because I thought I knew Sholom like that, and I only knew the book’s author, Barak Hullman, in a cursory, across-the-shul, oh-he’s-the-guy-who-sings-a-little-too-glee-clubbish way. When my in-laws sent me a clipping of the Jerusalem Post advertisement for the book, I had to ask myself, who was writing it? Who has the chutzpah and the closeness to write 300 pages about the man who helped us survive our first year of marriage, who stayed at our Brooklyn home whenever he was called away from Jerusalem, who seemed to have something new to share, something meant only for me, every time I saw him or spoke to him?

That was one of Sholom’s gifts. I wasn’t his only confidant. I wasn’t even his only student, even though his yeshiva, Simchat Shlomo in Nachlaot, fluctuated between two and ten students during the year I was there. It’s bigger now, not that numbers matter, because Simchat Shlomo’s virtue, and Rav Sholom’s virtue, was not that he attracted masses of students — the yeshiva attracted the students who needed it to exist, a yeshiva of misfits and weirdos and doubters and true believers. While I was there, my chevrusas included a comic book artist, a self-proclaimed heathen, an Internet activist with the handle Orthodox Anarchist, and a banjo player.

The yeshiva was named after Shlomo Carlebach, but it took on Sholom’s personality. It may have been scant most days for morning prayers, but every week for shalosh seudos, the come-and-hear meal and meditation that closes out Shabbos, Sholom and Judy’s house was packed, and the walls swelled like the cosmic sukkah made of leviathan skin that will grow to house all the righteous at the end of days.

Like the one where Barak complains about a crazy guy at shul who was praying maniacally, and Sholom says that we should all merit to pray like we’re crazy.

And the one where he ducked out of a rabbinical program just before the final test, telling Sholom, “I don’t want to be a rabbi,” and Sholom, thinking deeply, said, “Neither do I.”

And the one where, also on Simchas Torah, a stranger shows up in a black hat and a long kapota, dancing around the shul, and it’s revealed to be Sholom, who would never wear such things, but that night his hidden self has become revealed.

Reading these stories makes you profoundly sad. Not just a retroactive fear of missing out based in the past, where you wish you could just grab a time machine and wind up at a party you hadn’t known existed, but in terms of putting limits on the limitless. Sholom was infinite. You never knew what was going to come out of his mouth next, or where he’d show up. When he died, he became finite. He would never be unexpected again. This book has an end.

On Shabbos I was getting water for our family’s lunch table and I reached for what we always call the Sholom pitcher. Once, while staying at our house, Sholom used a pitcher of water and accidentally cracked it. He got up early and went out to all the Jewish markets until he found a glass pitcher that matched its design almost exactly. It was no big deal! And we had other pitchers! And we barely even used pitchers! But he wanted to replace the pitcher he broke, and we didn’t even know until he replaced it. What could we say but thank you? So we did.

The philosopher Alain de Botton once attempted the impossible: to write an autobiography of his best friend. The effort was interesting, but it was so insular and overthought that it ended up revealing less about his subject and more about de Botton himself.

This book is a treasure, a gift. I almost wish that I didn’t know Sholom before so that I could have the experience of knowing his character through this beautifully incomplete portrait. I’m sure I will go back to this book again and again, get to know its hundred-plus anecdotes, each another piece of the gorgeously complicated puzzle that was Sholom Brodt, memorize these lines as well as I know some of my favorite books. But I did know Sholom, and he still holds an infinite piece of my heart, and I’ll never be able to see the borders and the limitlessness of the person I knew, who might not have been perfect in the classical sense, who would hate my saying this, but whose mistakes were the mistakes of a tzaddik.

Buy the book A Shtickel Sholom on the author’s website or on Amazon.