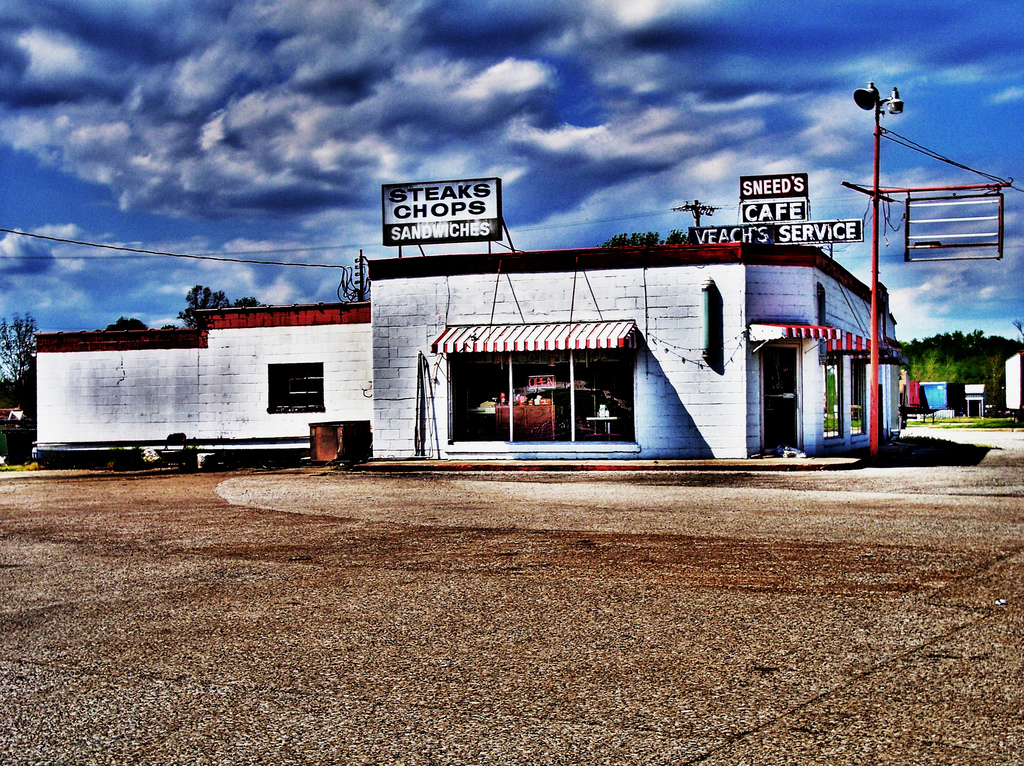 Kosher on the Road

Our story so far: Matthue was watching football at a friend’s house and someone offered him a ride across the country. He said yes.

One thing I hadn’t counted on when I hit the road: How would I eat? I don’t know if you know, but the kosher diet is one of exquisite restriction, that whole no milk and meat together thing, but also a host of other things we can’t have — namely, anything cooked in a kitchen that’s ever had anything non-kosher inside it. In today’s modern world of packaged food and artificial everything, it’s gotten a little easier — Oreos, for instance, might look like cream-filled wafers, but there’s no dairy, no meat, the whole thing’s basically a lump of sugar cooked by a robot.

But I’ve heard tell of supermarkets on the road where not even the orange juice and bottled water is kosher, where the tiny Ks and Us and Hebrew letters we search for in our secret codes are absent, where even the potato chips and white-bread loaves are baked with lard. When Elyse and I planned our cross-country expedition, I just figured I’d stack up before we left. Or on the way. Or before we got too far.

Let me tell you, the Matthue of the future — the one in my plans who will take care of everything — is way more responsible than the Matthue of the present. The whole idea of doing things to fulfill a need that doesn’t exist in the present is too abstract for me. Do laundry? I have exactly one set of clean clothes. Groceries? I’m not hungry. In fact, the idea of packing sandwiches didn’t even occur to me until three hours after we’d left San Francisco behind, careening down the 101 in the wake of a Jackson Pollack-shaped cloud of exhaust, the air turning steadily dustier and the hills disappearing behind us like a forgotten dream, our elevation climbing until all we saw in the rearview was skyscrapers, our last taste of San Francisco, that array of metal that we’d always known was never the real San Francisco but was a postcard, a smokescreen, a boring and blase mask hiding the real beating and burning heart of the city.

And then, all of a sudden, we were nowhere. To the right and left, as far as the horizon, a single pasture stuffed with hundreds and hundreds of cows. Every so often, a rest stop interrupted the progression of cattle fields and cornfields. In the backseat, Elyse’s dog Joey brayed imploringly. Elyse looked at me. I looked at her. “You mind stopping?” she said.

“Um,” my stomach growled, roared, Hail Maryed, “I guess not?”

She swung the SUV from the left lane into the exit ramp. There might have been a few lanes of traffic between them, neither of us really noticed.

As soon as we got there, I ran inside to pee. The rest stop was eighty percent gas station, twenty percent parking lot/gift shop/diner. I wasn’t sure what the gift shop was, or what souvenirs anyone would possibly buy to remind them of a highway, but nothing about the transient community walking around the rest stop made me want to find out. In San Francisco, common wisdom was that as soon as you left the city limits you’d be right in the center of Middle America, adrift in a sea of rednecks and KKK members and non-freaks.

And here they were. I looked at their faces. For people who hated Jewish and black and queer people, they seemed kindly. I kind of wanted to hug them. I wanted them to take me back home, to their nice, non-apartment homes made of brick that had fireplaces and kitchens that might not have been kosher but had food in them, bedrooms with beds that maybe they’d let me sleep in.

I went back outside to meet Elyse and Joey. They seemed bright and bouncy, playing a game of Frisbee at the far end of the parking lot. “We’ll just go for a walk, and then catch some lunch,” she told me. “You want to take the lead?”

“To take the lead?” I was confused.

A few years from now, a vastly similar thing would happen. I would be in suburban Baltimore, in my wife’s cousin’s house. I would be spending most of the time avoiding the adults, hanging out with the 7-year-old middle child, talking Pokémon and Marvel Comics. Then their youngest child, a baby, started crying. The mother scooped her up and plopped her on the change table. My wife said, “Don’t worry! I can do that.” And then, upon mounting the change table, turned to her cousin and said, “Maybe Matthue should give it a test drive.” A diaper in one hand, a wet wipe in the other, and a writhing and giggling baby in front of me, I stared down that tiny butt, anxious and fearful at the unknown, at the greater meaning of life, at the idea of putting a small and delicate body in my hands. Could I do it? Did I? I wrapped the diaper around her butt.

I took the leash in my hand.

Joey adjusted admirably. He led the way: from the parking lot to the gas station, around the tanks and the nozzles, to a grove of orange trees out behind the mini-mart. To each one Joey trotted up leisurely, raised a leg, let his inner light sparkle. After each flurry, he looked up at me, searching for approval, as if to say, What did you think of THAT?

Afterward we walked back to Elyse, who’d been standing on the precipice of the souvenir shop, watching us like a proud parent. “Good job,” she said — to me, I think, not the dog, although it sounded like she was talking to me as one. “Now let’s get lunch.”

At some point in my life I’d stopped eating in non-kosher restaurants. It had been incremental, for me: first no dairy, knowing, as I did, that most non-kosher cheese had meat baked into it, and existing, for a while, in denial. Then it was just vegetables. Then, for some reason, it was only French fries, and only when I was drunk. And then I realized I just couldn’t. I’d still sit occasionally in non-kosher restaurants with my friends, also usually when I was drunk, watch them eat and hang out and sometimes order a sympathy glass of grapefruit juice or root beer or beer. But there was always the knowledge that home was not far away afterward, the thought that, whatever good stuff they might be devouring, I was no more than an hour or two away from scarfing down a late-night pizza bagel or Dipsy Doodles or homemade French fries of my own.* But here — on the road, in the middle of Middle America, not knowing where I would spend tonight, much less when or where I would next inhabit a kosher kitchen — I wasn’t really sure.

And so I watched Elyse stab her salad with a fork, watched the bubbling orange cheese from her cheeseburger ooze out. I thought of the Chinese proverb of the poor student who eats nothing each night but plain white rice, who steals smells from the expensive restaurant downstairs to make it taste like fine food. And then I remembered that you aren’t allowed to take any benefit from mixing meat and milk, not even enjoying the smell.

I stood up from my seat, where not even a glass of water sat; I’d been feeling evangelical that day. I glanced toward the bathroom; decided I was through with lies.

“I’m gonna go out and check on Joey,” I said. “Where did you put that Frisbee?”