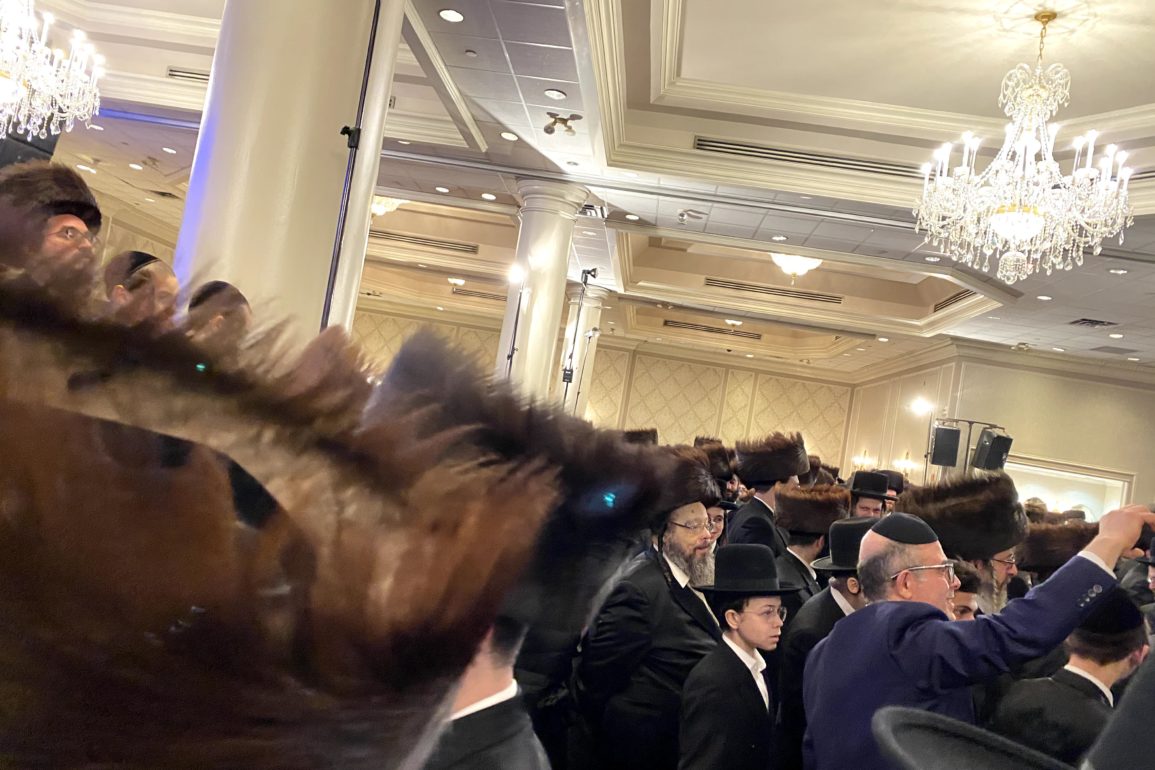 The wedding was so grand, and so happy. The hall was a Satmar imitation of a Queens imitation of a drawing of a Roman palace in a Midwest textbook from the 1950s. There was a resounding fanfare of horns when the bride and groom entered, and there was a horn section, but they were all standing with their instruments down.

For some reason, Chassidish weddings fill me with joy. The bride and groom are only twenty years old, more or less, usually, still a few years from your standard mid-20s relationship crisis, much less your job crisis of your late-20s and your oncoming-death crisis of your 30s and your how-am-I-still-alive crisis of your early 40s. (Sorry, should’ve warned you: spoiler alert for the rest of your life.)

My friend — well, my friend’s son, who is also my friend — is a nerd with social poise, studious and kind, laughing at the tisch table before the thing gets started. He grins at me from across the room like an inside joke. He probably has an inside joke with all the hundreds of people in here. But standing under the chuppah outside he is solemn, eyes fixed straight ahead, invoking mystical thoughts discovered in the depths of books I’ve never plumbed, making eye contact with another level of existence, waiting for his bride.

A smash of glass. A succession of circles woven, bride around groom. Blessings pronounced as long as the human voice can stretch.

And then we’re downstairs, in the banquet hall, the place is not transformed but we are, maybe. The crowd is going wild, this poised, orderly procession of men in cylindrical UFO-ish foxfur hats in a circle, squishing up against a rowdier, more chaotically blob-shaped group of younger men, kids, but tall, in hats. They are jumping up and down.

They are going just a little bit crazy.

Celebratorily crazy, jubilantly crazy, but definitely crazy. There are a few fur shtreimels in the mix — at the center of the conflagration, a dude in a silver coat tosses it in the air, Ferris wheel-style, and lets one of his friends catch it as he drops into a seamless breakdance — but from where I am standing, in the center of the crowd like a bewildered Moses after the Red Sea was split not by him but by Nachshon ben Aminadav, it’s like the most crucial moment in a Choose your Own Adventure book. Do I join the established people, the married men, or do I join the raucous mosh pit of the single and agile?

I am forty. I work out four or five times a week. I would be more than happy to go to bed, right here, right now, cuddling a cloth napkin for a blanket. I am bound by divine commandments to entertain the groom and bride at their wedding, to engladden them, and to get funky on the dance floor.

Point: there are other ways of entertaining them. Counterpoint: but they’re not as easy to do, and many of them are not nearly as socially acceptable. Counter-counterpoint: I’m an introvert.

The debate is ended by my friend Yechezkel, who shows up, yanks me from the crowd just as a frenzied mob of 10-year-olds with streamers rushes into the place I was just standing. He’s in his upper 50s, his voice sounds like the possibility that you could bottle up Brooklyn, and he is just about the most cynical person ever.

Our first stop is the bandstand. The horns are playing now, settling down into a respectable groove. Yechezkel doesn’t care about them. “These kids,” he says, pronouncing the word like a curse. I would never have noticed. These boys, three or four or five years old, stand in front of the horns and the guitars and drums, no more than a foot and a half from the musicians. Just staring. It’s like they’re watching TV, only they don’t have TVs, they probably don’t know what a TV is. The have no idea they’re on a stage, or they don’t care. They’re just transfixed.

“Chezk!” calls this guy, clean-shaven, Joker-haired, coming over and wrapping Yechezkel into a handshake-hug. He introduces us. “Matthue’s a writer,” he says, enunciating it in pure Brooklynese, writ-UHH, like a foreign word. “Kenny’s a writuhh too!”

“Let me tell you,” says Yechezkel, “You know the Woody Allen story ‘The Whore of Mensa’? Kenny is the whore of Mensa! He did a reading, he got asked to read that story in front of a crowd in Yiddish. This is a very fancy place, no one knows how to speak Yiddish, nobody knows what Yiddish is. So he reads the story, in Yiddish, and this gorgeous woman asks him about it. She asks him all these philosophical questions. They have the greatest discussions — which is driving Kenny crazy, by the way, because she never wants to have sex, she just wants to talk about philosophy! And so Kenny turned into the whore of Mensa. It’s a tragedy, Matthue. A tragedy.”

This entire time Kenny stands there, smiling, thoroughly distanced from the story, as if it happened to someone else, somewhere, a very far way away. He laughs politely at the punchline, though, like he knew it, or like he knew it too well.

Explosions all around us. Muffled bamfs followed by a loud pop, shiny colors filling the air. It’s nearly 11:oo at night, and the groom and bride have finally emerged.

He is on a chair, but a monster chair, floating multiple stories above everyone else. The crowd is ecstatic. (It is a crowd: all the people from our synagogue; all the bride’s father’s students, and all the groom’s grandfather’s devotees; and what seems like the entire population of Boro Park, coming out to witness, and to be part of, the spectacle.)

And the groom is dancing on the chair, and going wild, but the crowd is yet wilder. To one side of us, there are all the older men, the married men, their shtreimels forming a canopy above, so horizontal it looks like you could walk across it, or float across. And the boys, the unmarried ones, in their black hats, are a dancing frenzy, are a mosh pit, a riot, and I remember when I knew how to be wild like that — I was, right?, once upon a time — but I am also not yet ready to shuffle around in the circle, one foot in front of the other, trading the wiseass remarks because I have seen everything, and know everything, and I am neither the master of this space nor a newcomer. I am a witness, an onlooker, a participant who doesn’t know how to participate. I just want to send my happiness to him.