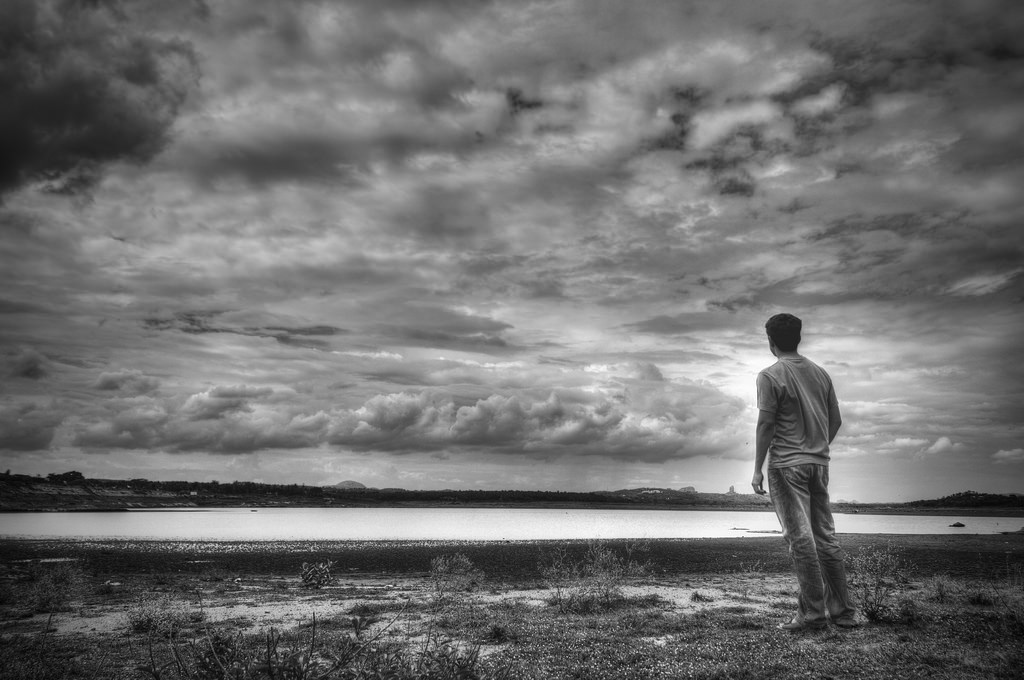 The Seduction Of Loneliness

“The most terrible poverty is loneliness, and the feeling of being unloved.”  – Mother Teresa

In Bereshit/Genesis 2.18, G-d refers to something as “not good” for the first time, after a whole list of good things in creation in the previous chapter.  The “not good” item is not, as we might expect, death or suffering, sin or the evil inclination, but solitude: “It is not good for man to be alone” (I owe this idea to Rabbi Lord Sacks).  In Judaism, the primal example of wrongness in creation is solitude, alone-ness.  G-d, the endless whole of the Ein Sof (the Infinite), is complete in and of G-dself, but a human being is lacking without an ezer kenegdo, a helper corresponding to him or her.

If I look over my life, a lot of it seems to have been spent lonely or alone.  The two terms are not synonymous, of course, and as an introvert and perhaps a bit of a loner I am quite capable of spending time by myself without being lonely.  Nevertheless, a lot of my life – a lot more of my life than I am happy with – has been spent feeling alone and unloved: alone in my room at home or university, alone in my flat now, alone in the playground at school, alone in a crowd, alone outside a building where other people are enjoying themselves, feeling too shy and unlovable to enter.

My favourite biblical heroes and fictional characters are mostly loners, people like Yirmiyahu/Jeremiah and (lehavdil) Batman.  At school I even found my life mirroring that of Bar Kamtza, not invited to parties that all my friends attended, on one occasion even after begging to be allowed to go.  Similarly, at university, when some of the students would go to hang out and have an informal tisch after Friday night dinner at the Jewish Society, I would go home and read, if I even managed to stay for dinner.

In retrospect, I am not sure what stopped me from staying, whether it was a feeling that it would be presumptuous of me to stay without being invited or if I was scared that if I stayed around people too long, they would start to find me boring and irritating and drop me.  Better to avoid people altogether than risk rejection, a strategy I have pursued throughout my life without, it must be said, a great deal of success: I am still intermittently rejected, but rarely feel accepted.

A rarer subdivision of existential loneliness is experiential loneliness: the loneliness that comes from a powerful, but rare experience (very good or very bad) that can not be communicated to the majority of people who have not shared this experience.  I believe several of the Apollo astronauts felt this, unable to share what it felt like to walk on the moon to people who have never left Earth; at the other extreme, I understand it is also shared by survivors of abuse and terrible tragedies who can not explain to other people what they have gone through.

Lonely people deserve pity and support, but loneliness itself is an unpleasant emotion, not just unpleasant to experience (although it is that), but corrupting.  It is a selfish emotion in many ways, a desire to share and to love, but also a desire to be seen and to be loved.  Often it takes without giving, desiring attention, but giving it ineptly, if at all, as lonely people are often lacking in the social skills necessary for healthy relationships of both give and take.  That, after all, is why they are isolated.  It can lead to anger at real or perceived rejection or self-pity and depression.

In my personal experience, loneliness pushed me dangerously towards excessive individualism and even something close to solipsism, feeling that no one could ever know me, no one could ever care about me, no one could feel anything as intensely as I do, even that no one lived as fully as I do; I even fantasized at times about being the only living person on a post-apocalyptic planet, or myself and one woman as a new Adam and Chava (it seemed to me that the only way a woman would want to start a relationship with me was if I was literally the last man on Earth).

In Judaism, this type of corrosive loneliness is supposed to be redeemed through the community.  (This idea of the supportive covenantal community that redeems the individual’s solitude is of course central to Rabbi Joseph Soloveitchik’s seminal text on religious existential loneliness, The Lonely Man of Faith.)  In the community the individual doubles her joys by sharing them and halves his woes by being heard and supported in his distress.

Unfortunately, those most in distress are often those who can not be heard and who are not supported, those who live on the fringes of frum society: the physically and mentally ill, older singles, widows, divorcees, the childless, even the temperamentally unsuited, those drawn to quiet, solitude and introspection away from the boisterous noise of Jewish communal life, the din of the shul and the beit hamidrash, the noise of the crowded Shabbat table and the communal broigus.  In a self-fulfilling prophecy, those on the fringe can become labelled as weird and anti-social; the needed communal support is not forthcoming, no Shabbat invitations, no shidduch arrangements, not even a sympathetic ear.

As for myself, loneliness and solitude remain a constant battleground for me.  I like to be alone, I enjoy walking out of a crowded room into the quiet of the night, particularly when feeling shy and overwhelmed by a crowd.  I have a real need for time by myself every day, yet sometimes I want company too.  I want to be understood and accepted.  Above all, I want to love and be loved.  I have taken to heart what a friend of mine said (not about me, about Avon from the classic British science fiction series Blake’s 7): a real loner wouldn’t spend so much time telling everyone how much of a loner he is.

I hope that I am not such a loner that I will be alone forever.  I have come to realize recently that I do indeed have friends, just not the type I can phone up and hang out with when I am feeling depressed.  My friends are mostly situational, which is not unusual, as far as I know.  I have Jewish and creative friends here on Hevria, geeky friends elsewhere online, friends with mental health issues at my depression support group and a couple of friends from my undergraduate days who I meet up with occasionally.  There is still such a long way to go, though.  I forced myself to try to get to a couple of tisches run by my shul recently, but found myself standing outside in the cold and dark, crying, although I did manage to briefly get inside for one of them and even managed to talk to someone, albeit someone I already knew.

I have also come to realize that those fictional loners who have always been so important in shaping my sense of identity often have a surprisingly large number of people around them on whom they can rely for support and assistance.  Batman, for instance, has his army of Robins and Batgirls and Justice Leaguers, not that he would ever admit to needing support, physical or emotional.

My situation is not ideal, but I have more friends than any time in the past and I am naturally solitary enough not to need a hugely active social life.  I prefer going out and seeing people occasionally or communicating online and then withdrawing to my man cave (like the Bat-cave, but with fewer gadgets).  I suppose I just wish that I had a couple of close friends I could open up to, not to mention that Special Someone who would love me and let me love her.