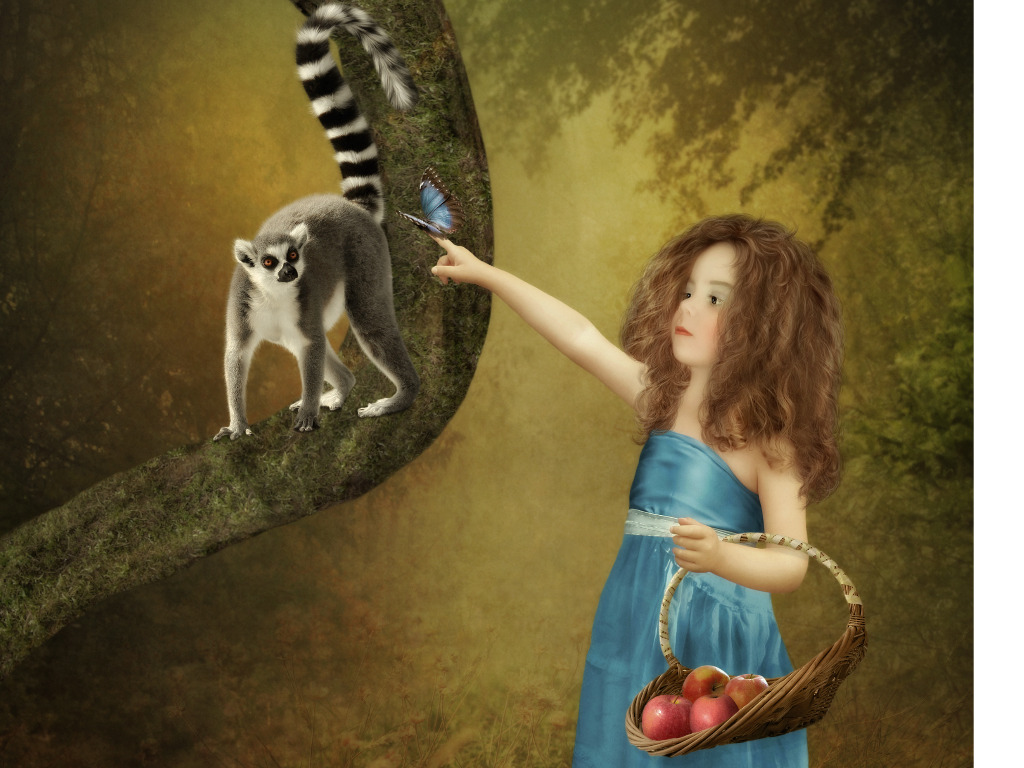 My daughter was determined to see monkeys.  Real live, “happy monkeys,” not the ones who stare at you reproachfully through the bars at the zoo.

We were on vacation… a cruise that stopped at several ports in the Caribbean.  Today‘s adventure was floating down the Rio Grande in inner tubes with a petite Mayan woman as our guide.

When will we see monkeys?

The guide smiled at my daughter’s enthusiasm and handed her a cacao bean that she’d split wide open.  Inside the thick green skin, slippery white seeds were packed tightly together. The guide showed us how to wiggle out the seeds with our fingers and then suck off the sweet sour coating.

“You probably won’t see a monkey, but try some of these. It’s what they make chocolate from.”

My daughter smiled politely, tossed the bean to me and turned back to look up at the trees.

I’m going to find one. She whispered to me.  I feel it.

This wasn’t the first time she’d had a feeling.  My daughter is a believer… through and through. She believes in unicorns and angels and fairy dust.  When she was in second grade, she came home crying because someone told her that Santa wasn’t real.

“But…. I’ve NEVER told you Santa was real. We’re Jewish!” I reminded her.

“I know.  But, I wanted to believe anyway.  I like to believe.” she sniffled.

She likes to believe in God too. Even though the years have taken their toll on my faith, even though my sons have grown further and further away from Judaism, my daughter holds strong. Being surrounded by skeptics and non-believers has only served to strengthen her resolve.

As we rounded a curve in the river, a swishing sound from above drew our attention to the treetops.  My eyes roamed from branch to branch, desperately searching for a swinging tail or mischievous face. Nothing.

My daughter looked right into my eyes.

God’s going to send me a monkey, Mama. You’ll see.

We continued floating down the river.  Mayan women washed their laundry on the banks as their children weaved in and out of the trees, shouting down indecipherable hoots and howls to the passing tubers.  My daughter yelled back.

The forest rang with their shouts. At first it was cute, but after some time passed, the other tubers looked less than pleased with the disturbance.

“You’re going to chase away the monkeys!” I hissed.

They didn’t find us.  Not when we drifted past the tiny shacks on the water or the fat iguana climbing the banana tree… Not even when the guide pulled us out of the river at the end of the line.

“I’m so sorry, sweetie.  I know how much you wanted to see monkeys.” I bent down to look into her eyes.  She jerked away from me and walked towards the bus. Tears caught in my throat as I watched her wrestle with her feelings.

Faith has waxed and waned in my life. As a child, I remember the joy of an answered prayer, the excitement of finding “signs” that God had sent me, the security of feeling protected. But, the older I’ve gotten, the more I’ve seen that not everyone’s prayers are answered, that “signs” are usually just projections, and that safety is a fairy tale we use to comfort small children with.

I know my daughter will likely wrestle with those same doubts some day.  But, her belief right now is so strong, so pure… watching her struggle with it felt raw, personal… like I was reliving my own experiences all over again.

The next morning we were scheduled to see Mayan ruins. My daughter dragged her feet as we got ready, slipping off to read her book or play with the tiny plastic dolls she’d brought along.

During the long bus ride, she sat quietly, her eyes scanning the thick forests and dusty gravel that whizzed by out the window.  I wondered if she was still looking for monkeys.

When we arrived at the site of the ruins, we were greeted by an English speaking guide. He led us deep into the forest where enormous stone structures protruded above the flat landscape.

My eyes stayed focused on the guide as he told us the story of the temples.

Each time there was a new emperor, another temple would be built on top of the existing one. The enormous tower before us was actually a densely packed stack of structures, its thick interiors rendering it almost completely useless for anything other than climbing to the top to pray. It was, for all practical purposes, a personal altar to the gods. In fact, when the reigning ruler died, he’d be buried, along with his temple, underneath the temple of his successor. Building the temple required years of hard labor and acres and acres of trees.  So many trees that the woods were deforested, causing widespread droughts which eventually led to the fall of the Mayan Empire.

The parallels to modern life did not escape me.  Today we serve different Gods… Gods of consumerism and indulgence. We cut down forests, rip fossil fuels from the earth, destroy animal habitats to please these “Gods”… all while knowing full well the destruction we are causing. Just as the Mayans forged the path to their own demise by destroying the Earth, so too are we, only this time with our eyes wide open.

But she wasn’t at the back of the group, or anywhere that I could see.  My heart raced as I ran back, retracing our steps through the woods..

A whooping sound came from behind the altar and there she was…. Her head thrown back, her eyes bright, howling into the trees as a pack of spider monkeys leaped over her head.