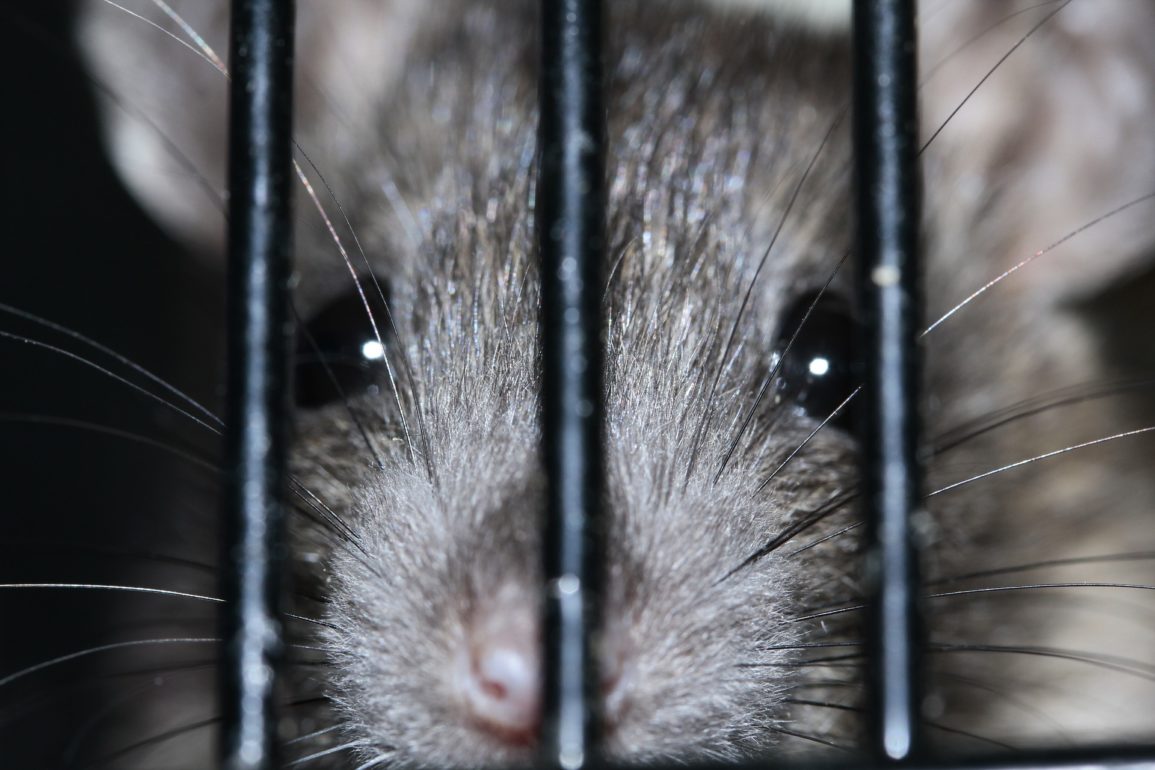 This Is My Master

“No. Listen to me.  This will all make sense, I promise.”

“What sense?  Look at yourself!”

A8  looked down at his chest and moved his white fur about with a shaking hind limb.  He felt the swollen red circular bumps peppering the surface of his body. Through his unsutured eye, he saw A17  pacing back and forth in the cage.

“We need to get out!  If we don’t, it will kill us.  I saw it today in the other room when it weighed me.  It took twenty others, put them in this clear box and choked them with gas.  If we stay here, that’s what it’ll do to us!”

“Because we are different… did you pay attention to the others that he gassed?”

“They were freaks and imbeciles.  Look at our neighbors.”

A17 peered into the adjacent cage.  Ten other rats were present. Of them, eight stood shaking, staring at the wall, and their breaths came irregularly.  The other two feebly staggered about, and one fell on its side.

“It would be the same way for us were it not for the Master’s love.  That shot he gave you this morning, it will keep you from being like them.”

“You’ve lost your mind because you’ve been here so long.  It ran that needle through us because it could.”

“Believe what you want, but I’ll tell you what I’ve seen.  When I first got here, there were fifty of us. Half of us got the shot with the burning fluid every day, and the other half didn’t.  After three weeks, the group which didn’t get the shot started having problems.”

“At first, it was subtle.  Someone in the other cage would slur his words when he talked to me, or maybe he would have a slight shake in his back leg.  We didn’t think much about it, but over time it got worse. You knew they were done for when they started having difficulty walking.  Sometimes, I would try to talk to them, but you couldn’t even understand what they were saying. It all sounded like painful groaning.  Eventually, they stopped talking altogether. After that, they kind of wasted away. Some of them died, but most of them, like you saw, were rid of their suffering by the Master, in his mercy.  None of them ever made it past six weeks.”

“What happened to the rest of the normal ones? You said there were twenty-five of you that got the shot, but it looks like you’re the only normal one left.”

“Ah… the others, ” sighed A8 raising his head wistfully.  “Because they were righteous, the Master decided to reward them.  He picked them one at a time and took them to his own private chamber, where they could forever bask in the light of his glory.”

“You fool!  He killed them like all the rest!”

“Quiet!  Don’t you dare curse the Master!  You don’t know anything. You’ve been here one day.  I’ve been here for ninety. I know what my eyes have seen.

“What your eyes have seen?  Really!?” jeered A17 “You don’t even have two eyes.  Your other eye is sewn shut.”

“This?” he laughed pointing at his sutured eye, “I promise someday you’ll wish you had the same.  Once the Master is sure of your loyalty, he blesses you by sealing your evil eye. After seven days of seeing no evil, he takes you to his inner-chamber.  All the others who lived here with me also had their eye shut. A week later, he came and took them away. I am on my sixth day now and cannot wait to see the Master tomorrow.”

A17‘s face dropped.  “Tomorrow you’ll die.  When he comes and opens our roof, you must jump out of his hand and escape.”

“You sound like an idiot, but it’s not proper to judge you. Nine weeks ago when I was taken from my mother and put here with the others, I thought just like you do now.  I was ignorant. Now I know better. Give it time, you’ll see.

“Do you hear that?  It’s the Master. If we’re lucky, maybe we’ll see his shadow.”

In the total silence and darkness of the night-time laboratory, rubber soles struck plastic floor.  A8’s nose stuck out of the cage as he strained for a better view, though all was black.

Dr. Schwartz entered the room.  Her footsteps were slow and deliberate.  It was 2:00 am. Fighting fatigue, and the monotony of repetition, she refused to leave before recording that day’s findings.

“Any second now!” exclaimed A8.

Dr. Schwartz’s hand fumbled about the wall for a light switch.

A17 shielded his eyes from the painful light which flooded the room.  Dr. Schwartz walked past the rodent cages and sat at her desk. Up to her shoulders on either side of her body were research papers.  She whispered to herself as she wrote, “IGF-1 treated display diminished clasping as compared to control. Even after nine weeks, they continue to demonstrate markedly improved vigor.  Heart rate is indistinguishable from wild-type…”

“Tonight is a good night indeed!” declared A8 “Not only did we see the Master’s shadow, but he is speaking to us!  I do not understand word for word what he is saying, but I think he is telling us of the greatness of paradise, and encouraging us to just give a little more of ourselves.  He says that this world, and its suffering, is an illusion no different than a nightmare…”

“Whatever you want,” interrupted A17, “I’m going back to sleep.”

Dr. Schwartz returned to A8‘s cage around 10:00 AM the next day.  When she lifted the top and held him, it was different.  Typically, the rats moved about and struggled, fighting her grasp. But this morning A8 was perfectly still, except for the occasional movement as he rotated in her gloved hand.  She could even swear she heard him purring…

A8 looked down from her closed hand at all the cages.  It all seemed so small from this height! Everything melted into insignificance; the itching of his eye, the heretic he met last night, even his aching limbs no longer hurt.  He felt ecstasy. His heart bounded as she turned the corner into a room he had never been in before.

“This is it!” he thought, “At last I will join the righteous and bask in the light of the Master.”

Dr. Schwartz opened the door.  Inside was a separate laboratory with different instruments.  She put him into a large transparent cube which stank of chlorine.

“This must be the waiting room,” thought A8 for a moment, then he heard a loud snake’s hiss.  Air loudly sprayed on him from above. Instinctively, he clambered to the side of the box and pounded on it.  Even though he breathed, he felt that the air wasn’t enough. He tried breathing more rapidly and deeply, but he couldn’t stifle his hunger for air.

He felt trapped underwater; a rush of warmth between his legs, and his whole body blushed, realizing that he soiled himself from the intense effort of breathing.

“Surely the Master will forgive the weakness of my flesh.”

He pounded on the box even harder, but it had all the effect of an insect striking a windshield. A gradual dizziness overtook him.  He fell to his side and saw Dr. Schwartz through the corner of his vision. Darkness blurred, and then settled on his periphery, making her invisible. As the darkness smothered him, he coughed,

“This is my Master and his ways are just.”