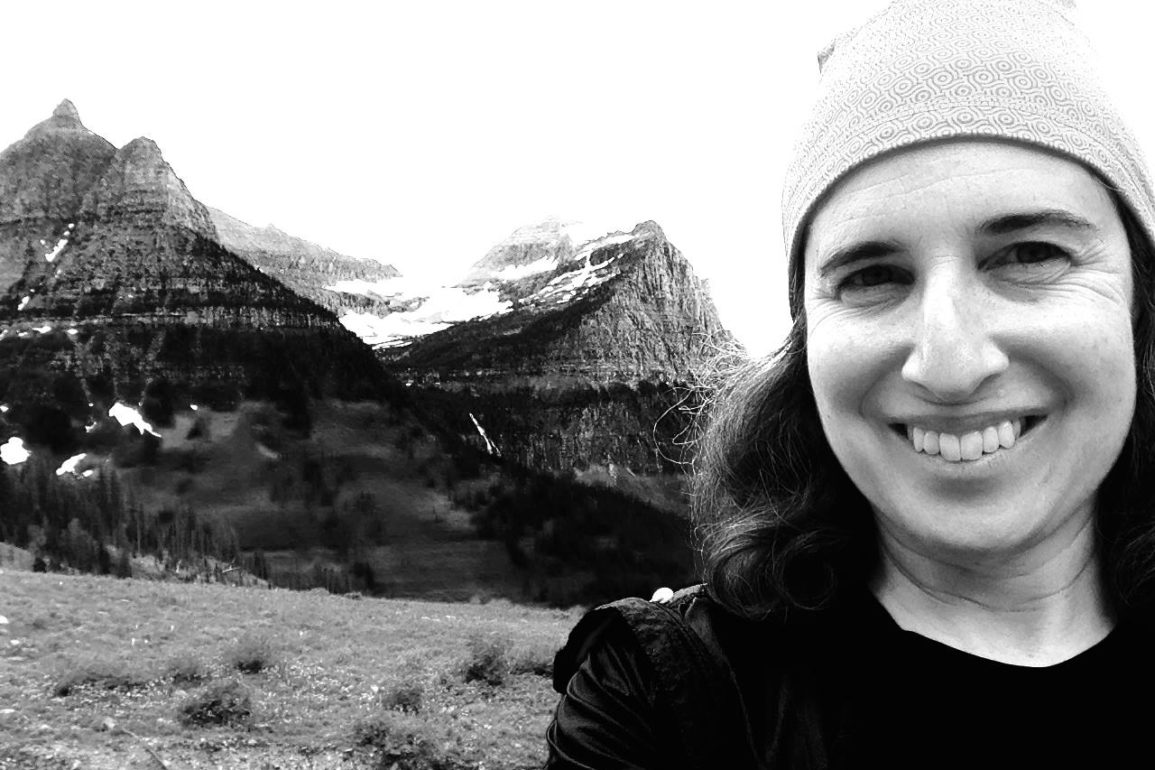 Why I’m Proud Of My Jewish Nose

Mine is an original Jewish beak, vintage 1967. It’s a nose others suggested I change to conform to their notions of beauty and, I suspect, to conform to their ideas of what to do with my life: get married and have children. At the moment, my authentic nose does not have a husband who kisses it. I have not passed along my nose, and what it represents, to children.

Along with my nose, which resembles the shape but not the size of the honker of my late father, a Holocaust survivor, I inherited the Hebrew and Yiddish names of his perished sisters and mother, plus his grandmothers. I also came into this world with equal if not ungodly amounts of stubbornness and sensitivity. Mine was, and occasionally still is, the hard nose of practicality. As a teenager in suburban Massachusetts I decided not to waste time in futile mimicry of America’s blonde haired, blue eyed, and long-limbed beauty ideal. Unlike some friends, whose less ethnic features gave them more of a chance of looking cool, I did not torture myself by endlessly examining my belly, butt and thighs for flab or wrestling my thick locks to make them feather like Farrah Fawcett’s (OK, I tried once and gave up).

At 14, during a Halloween shaving cream fight with the cool kids, I collided with a friend as we chased the same cute Korean guy. My nose smashed into her skull. The aftershocks thudded behind my eyes. My face throbbed and the bloody faucet of my nose dripped onto my blue plaid flannel shirt. Someone handed me a roll of toilet paper, intended for pranks. I tore off a fistful and pressed it under my nostrils, replacing wad after wad as blood soaked through the white squares. Back home, I swaddled my nose in a wash cloth, packed it with ice, and swallowed aspirin for the swelling and pain.

“It’s just a bump!” I protested when my mother wanted to take a look. “It will go away!”

I refused medical attention. I did not wish to by seen by a humorless, sterile-jacketed man who distilled me to a set of measurements or a collection of symptoms and failed to engage me as a person.

“I don’t care what you think!” my mother yelled after I had nursed my nose for two days. “I’ve made an appointment. You might have broken it. It could be serious.”

We drove to Lexington Pediatrics in our beige Chevy Impala wagon, a seven minute ride of defeat. The doctor, thin-lipped and graying, sat in his white coat with a snaky stethoscope dangling from his neck, my brown file open on the metal desk in front of him. I scowled as he got up, walked around to my chair and asked me to stand. He fingered the right side of my nose.

“There’s a contusion,” he pronounced. An X-ray later confirmed no broken bones. “If you want to have the bump removed, a surgeon would scrape out and reshape the hard cartilage.”

I squeezed my legs together and shuddered.

“But there is no guarantee it would come out looking the same,” he said, returning to his chair. Although my nose had become bent out of shape, I could still breathe. Surgery seemed unnecessary.

“If you want…” He glanced down, scribbled in the folder and then looked up at my mother. “If at some point you wanted to have it corrected, I can write a letter.”

My mother caught on.

“Did you understand what the doctor said?” she asked as we rode home. “If you ever decided to have a nose job, insurance would cover it.”

I frowned and glanced at my mother’s profile. It did not declare any identity or ethnicity. Her straight “beautiful” nose did not look like mine. She could pass. I could not. I stared through the windshield, my expression frozen as questions crashed and churned like storm waves. Why did such a thought cross her mind, let alone escape her lips? Did she not like my nose? Wasn’t she proud to be Jewish, to have a Jewish looking daughter? Did she not consider that my nose might be exactly like those of my father’s sisters and his mother? If their last trace was on my face, how could I erase my lone link to these women, about whom I knew next to nothing?

“I would NEVER do that!” I snarled. Even if she had meant for her comment to be a casually tossed softball, a way to broach a potentially delicate subject with her sensitive daughter, it landed in my soul with the force of a rock hurled at a synagogue during Kristallnacht. It shattered any illusion that she had a clue as to who I was in that moment, that I felt a duty to keep alive the memory of my father’s family, even if the best way I knew how was preserving my nose. Since the Holocaust remained a taboo, I did not speak this aloud. The conversation ended in tense silence.

I began public high school with my now slightly bumpy but still functional nose. The first rhinoplasties happened stealthily, over a vacation break. Those two patients, girls from wealthy families, stayed out sick for a few extra days while the swelling and bruises faded. They returned with their new models, the skin still shiny. They behaved as if nothing had happened but still wanting acknowledgement, like when they arrived to school with a Louis Vuitton handbag or in a leather miniskirt from Paris. Although their wardrobes stood out among the markdowns that my friends and I gleaned from jumbled racks at Marshall’s, both ended up with generic profiles. It was as if they’d picked the same nose in different sizes from an expensive catalogue, all sales final.

If they lamented the loss of their distinctiveness, they said nothing, at least not to me. I could not bring myself to say anything to them, either, even though our lockers were so close that when we opened or slammed the flimsy metal doors we were practically back to back. It’s as if they had thumbed their new noses at my lost relatives and the rest of the six million who would have given anything to live, even with a deformed nose. These girls’ particular pursuit of happiness threatened my fixation on “Never Forgetting”, if not my ideals and my very existence.

One, then another, and yet another high school classmate went under the knife, in college and afterward, their Ashkenazi noses tamed into acceptability if not domesticity. Each time it happened my heart sank a little more, as if the castoff cartilage had curled up at the bottom of my ventricles, aware that Jewish grief already made its home there.

I wondered if my peers would look in the mirror one day and miss their former reflections or regret shearing off their ancestral features. What could they do in such a case? Would they recite the mourner’s kaddish for their vanished faces?

As one of increasingly few holdouts, I couldn’t help but look down my nose at the vanity, or insecurity, of others. I told myself I was stronger and truer than those who swapped noses. I held my highly sensitive nose at the stench of the double standard that demanded women look, dress and behave a certain way to be loved, and therefore accepted, whereas men enjoyed enormous latitude. That society applauded and valued women primarily for their outward beauty filled my nose and the rest of me with a hot rage. It’s not that I felt unattractive. But I did not want to collude with the ugliness of sexism and the prevailing belief that if a woman wasn’t in a relationship there was something wrong with her, and that the easiest and fastest way to get, and of course keep, a man was to look and behave in a feminine, sexy yet unthreatening way.

“You know,” said one Hungarian boyfriend, appraising me over the rims of spectacles that perched on his highly protruding proboscis. “You could be a model if you were a little taller and had a different nose.”

I exited that relationship but it left me with a nose for discernment. I didn’t want to be appraised, assessed or compared or even shown off on a suitor’s arm as if he’d won a prize. I didn’t want my appearance to assuage a man’s insecurity or vice versa. I wanted to be appreciated for who I was inside, including my frequently misunderstood sensitivity. My stubbornness, I now see, had been my crude way of protecting that sensitivity from those who didn’t know how to engage or who told me to grow a thick skin, as if that were as possible as sprouting a new nose.

As someone who has been unattached for a long time, there are moments when I gaze from afar at couples and families and I feel like an orphan with my nose pressed to the glass, looking in at a party to which I was not invited or, perhaps, whose invitation I repeatedly chose not to open for different reasons at different times. At other moments I cherish my flexibility and can’t imagine giving that up, even though solitude can be as devastating as it is delectable. Every so often I touch the barely perceptible bump on the right side of my nose and I wonder what might have happened if I’d made a different choice, a choice to blend in. But if I am going to go under the knife, it will be to continue to gently pare away the tough outer layers of my stubbornness to further expose and share my sensitivity. For that procedure, alas, there is no anesthesia.