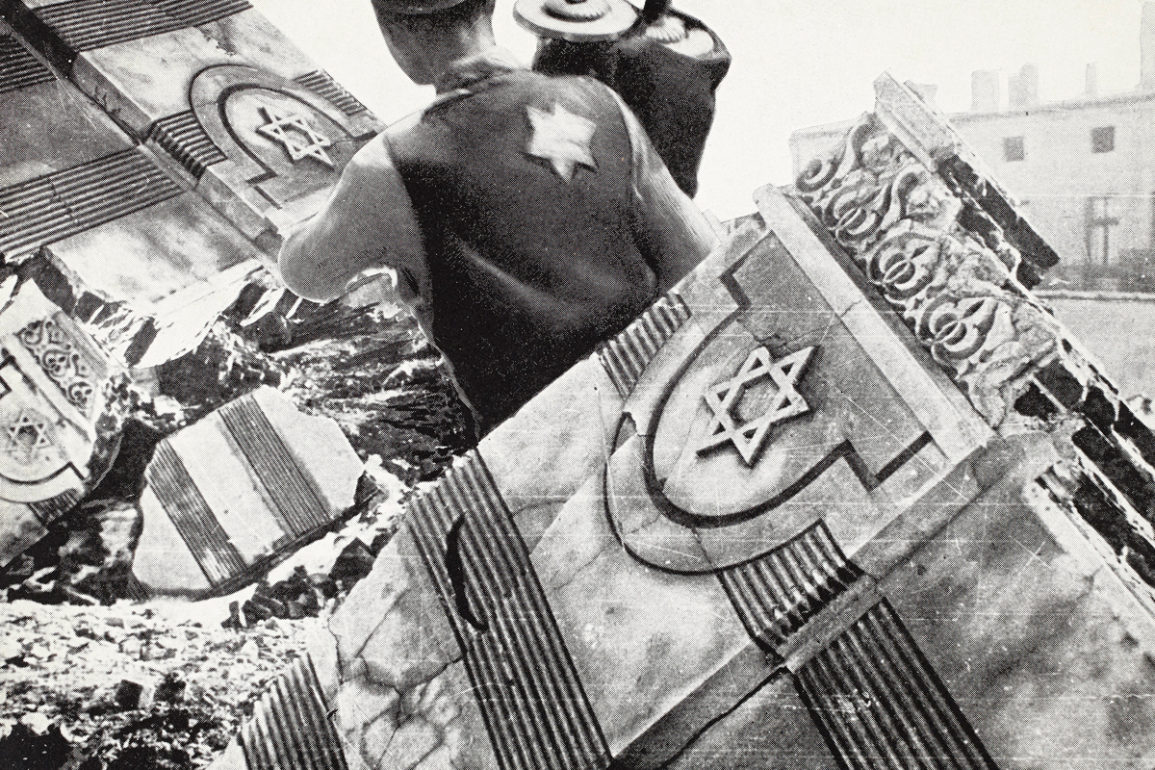 The Holocaust On Display

Image: “Man who saved the Torah from the rubble of the synagogue on Wolborska Street” (Image from the Henryk Ross Collection, Art Gallery of Ontario, used with permission)

Of one and a half million surviving photographs related to Nazi concentration camps, only four depict the actual process of mass killing perpetrated at the gas chambers. In his work, Images in Spite of All, the French philosopher and art historian Georges Didi-Huberman pursues these images and their import, and his doing so has been harshly labeled as grotesque voyeurism. In his 1965 work Entre deux soleils—One Generation After, a collection of stories and autobiographical fragments Elie Wiesel wrote: “Still the story had to be told. In spite of all risks, all possible misunderstandings.” Depicting the Holocaust (Ha-Shoah) by any means is fraught with difficulty. Let’s shed some light on the subject.

Possibly one of the most perceptive discussions of the topic of the arts and photography, with particular emphasis on poetry, but by extension all artistic endeavor is “Light Speaking” (Poetry magazine) by V. Penelope Pelizzon, she writes:

Photographs don’t derive their essence from their spatial quality. They exist in space, of course. But a photograph, like a poem and unlike a painting, depends on time. A photo’s essence is that millisecond caught by the shutter, an instant that often gains power and meaning the further we move away from it.

Pelizzon is all in for photography and taking a whack at interpretation through artistic endeavor, especially poetic in nature which actually is a genre in itself called ekphrasis.

Enter those such as Susan Gubar, who wrote Poetry After Auschwitz: Remembering What One Never Knew. She devotes an entire chapter in her book to the subject “About Pictures Out Of Focus.” She has lots of issues against photography, particularly Nazi generated photos which indeed comprise the bulk of images remaining, in these

The visible not only hides the unseen and promulgates a morally problematic distancing but also generates factitious, duplicitous testimonies.

Then there’s Janina Struk. Her book Photographing The Holocaust: Interpretations of the Evidence, probably the closest thing to a definitive work, expresses a number of concerns and cautions related to the matter, most tellingly

Photographs are fragments. They illustrate stories, they do not tell them. It has been left to curators, film-makers, historians and propagandists to determine how they are interpreted.

To that list we can add poets, writers, composers, and why not photographers as well.  She goes further, even

Archives are not neutral spaces; they impose their own meanings on photographs. The ways in which they are organized are determined not only by where they are and when and how they were established, but also by the political culture of the countries in which they are found.

Which brings us to the exhibit of the Ross Collection of Photos of the Lodz Ghetto at the Museum of Fine Arts Boston which opened March 25 and continues through July 30. The main display includes over 200 images organized by the Art Gallery of Ontario, repository of the full collection. This is the first exhibition of Ross’ work in the U.S. Ross was an official photographer for the Jewish Administration’s Statistics Department in the ghetto. Just before the liquidation of the ghetto in 1944 he buried his negatives, unauthorized photos he had taken. After the war he returned and while water damage had destroyed about half the images, the others as had he survived.

So, what are we to make of all this?

Allen Ginsberg, a poet for all time, and certainly the voice of a generation, was also an avid photographer. He called his snapshots “certain moments in eternity.” In his remarks upon accepting the Nobel Prize for Literature the poet Czeslaw Milosz said: “Our planet that gets smaller every year, with its fantastic proliferation of mass media, is witnessing a process that escapes definition, characterized by a refusal to remember.” That was in 1980. Art memorializes, conceptualizes, transfigures.

Anna Ornstein, associated with the Terezin Music Foundation, is Professor Emerita of Child Psychiatry, University of Cincinnati Co-Director, International Center for the Study of Psychoanalytic Self-Psychology, and Lecturer in Psychiatry at Harvard Medical School. She has this to say:

As a Holocaust survivor, I am deeply concerned with the survival of the memory of this catastrophic event. It is my conviction that survival of any historical event can be assured only when such events become transformed into various forms of art. There are indications that such a transformation is currently in process in all forms of art: in poetry, fiction, films, the visual arts, dance and music.

Ross’ “Man who saved the Torah” photo is unique. It is a montage Ross created from two separate photos, one depicting the ruins of the destroyed synagogue and the other of the man with the Sefer Torah (Torah scroll). In the 1950s Ross emigrated to Israel and he created this “composite” photo then and there. A story, apocryphal perhaps, goes that he ran after this fellow with his camera calling out I want to shoot you, the man thinking he meant this literally; finally convinced, the man said something along the lines of alright you want a picture, you better make it a good one.

In creating the montage Ross, I think, created a testimony. I associate this amazing photo with Rabbi Chananya ben Teradion recalled in the Yom Kippur Martyrology service. Burnt at the stake by the Romans, wrapped in a Torah, he called out “The parchment is burning, but the letters are flying free.”

In Judaism, the requirement to remember (zachor) is a biblical imperative (Deuteronomy 25:17–19). In this era of fake news and tweets, with knowledge being devalued in many places, we need, more than ever, to rely on humanity’s history in all its truth, both the ugly and exemplary, to guide our decisions about what is happening around us, pointing where we might be headed. Borrowing from the famed sage Hillel, “if not now, when?”

I offer the following poem as one more means to keep the flame of memory and truth ignited.

Pictures Of The Lodz Ghetto

I buried my negatives in the ground in order that there should be some record of our tragedy. . .I was anticipating the total destruction of Polish Jewry.  I wanted to leave a historical record of our martyrdom.
—Henryk Ross

Every Jew attempting to crawl through the wire of the ghetto fence or over it or to otherwise leave the ghetto without permission will be shot without warning.
— schutzpolizei-commando order issued April 12,1941

I look, I see—
a corpse is taken away
in a cart built for the purpose
rolling somber on the
cobblestones of Lodz
taken by the burial society yet
another victim of starvation
the sick are evacuated
a group of three men with
sullen looks a woman with
anguished expression, pulled
in a horse-drawn wagon down
the streets of Lodz
with rifles held high,
a firing squad of Nazis
kill those standing at
a distance the dead falling
in the winter snow of Lodz
with bodies on the ground
soldiers matter-of-factly
supervise as blank faced
soon victims dig their own
graves in the woods of Lodz
Sarah is just four
she loves to cuddle
her rag doll she
named it Sunshine
she sleeps on a mat
on the floor where
she lives with seven
others in a room
above a cobblers’
workshop on Spacerowa
Street in the ghetto of Lodz
two lovers, Joseph
and Miriam embrace
in the vestibule of a
building sharing a
soft kiss oblivious
to the cold wind
winding through
the ghetto of Lodz
amid a cacophony of
youthful bickering mixed
with the hubbub of crowds
everywhere a child named
Jacob and his friends play
a game called “Jews and
policemen” some hiding in
garbage cans and barrels
as the other children stalk them
on Drewnowska Street
in the ghetto of Lodz
a woman at a stand trading Jude stars in the ghetto
a young girl working in a laundry room in the ghetto
an abandoned body decomposing in the ghetto
a busy street market scene in the ghetto
baking matzah in the ghetto
a boy digging for food in the ghetto
a boy fallen on the street from hunger in the ghetto
corpses and body parts in the morgue in the ghetto
a cook ladling soup rations into pails in the ghetto
a couple with a baby in the ghetto
an execution by hanging in the ghetto
a family looking out a window in the ghetto
workers hauling a sewage wagon in the ghetto
a woman sitting in the ruins of a destroyed synagogue in the ghetto
men hauling a bread cart in the ghetto
mother and a baby looking into a mirror in the ghetto
bride and groom at their wedding in the ghetto
mass deportation to a death camp
entry gate to the ghetto
We shall fight,
In life and death,
Until you give us
A bowl of soup and bread
To keep us alive,
And to be full.
Everything is up in the air
Mir veln kemfn,
Oyf leybn in oyf toyt,
Biz ir velt nisht geybn
A tele zup mit broyt.
Dus leybn tsi derhaltn,
In tsi zayn nor zat.
Gefloygn iz Ales*

“Pictures Of The Lodz Ghetto” is based on the extraordinary photography of Henryk Ross (1910-1991). 3000 of these images plus additional related material are housed at the Art Gallery of Ontario. The Museum of Fine Arts Boston will present “Memory Unearthed: The Lodz Ghetto Photographs of Henryk Ross” March 25-July 30, 2017.

What of the ultimate fate of the Torah saved from the ruins of the synagogue on Wolborska Street? Inquires have been made including to the Jewish Community in Lodz (Gmina Wyznaniowa Żydowska w Łodzi), yes there is a reconstituted Jewish population there, consisting of some 300 Jewish souls, mainly older persons. Updated information will be issued in these pages pending further word. Let us hope it is rightly being honored somewhere, yet another survivor of humanity’s inhumanity.

Before embarking on the writing of Holocaust poetry I spent considerable time, 30 plus years, exploring an appropriate response. I write about this journey in “The Poetry of Bearing Witness” published in On Being-On the Blog.

While for convenience the diacritical marks of the Polish letters (Łódź) have not been used, pronunciation is a separate matter. Although anglicized names are more accepted in some cases such is not the case in this case. In English it may be Ludz, in Yiddish, Lodzh, but it’s Woodge in Polish; this is the preferred pronunciation and for example is used for the reading presented.