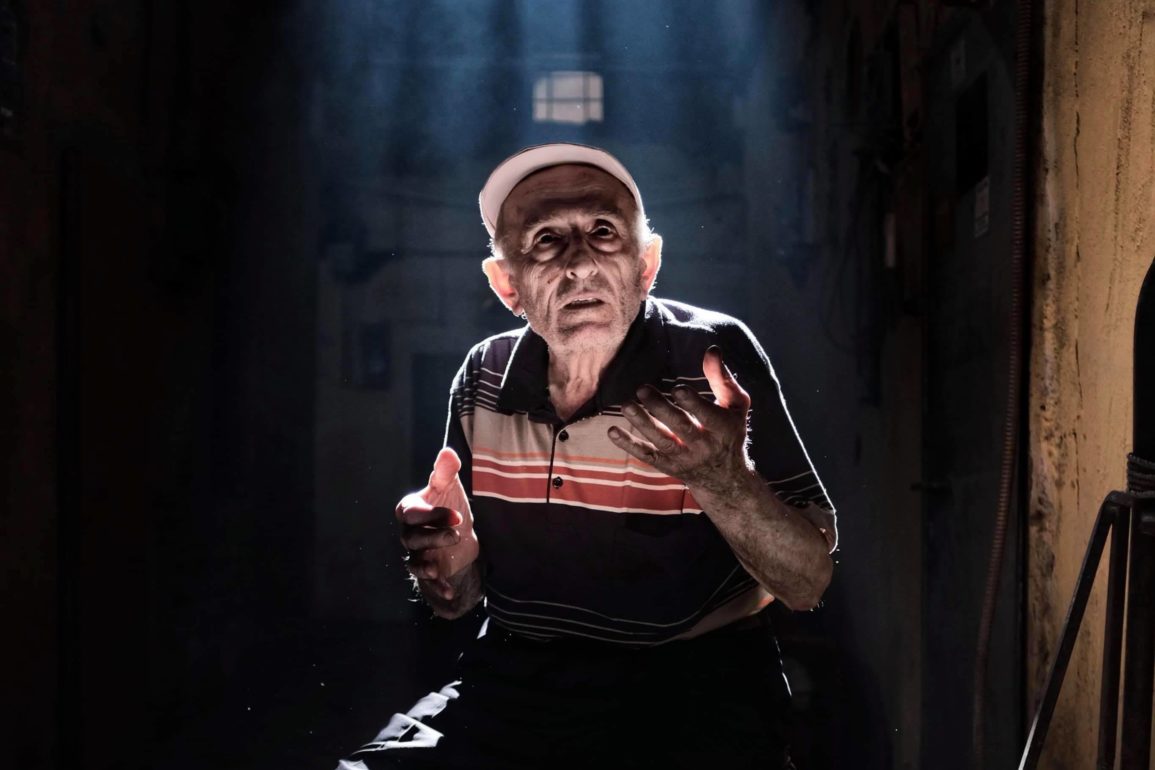 I must have dozed off during the first segment of Rachel Maddow because one moment Rachel is teasing undercover footage of a migrant detention center and the next moment Flo the Progressive lady is singing and a man is beside me on the couch with a carton of Lactaid ice cream.

My carton of Lactaid ice cream, the one I bought just this afternoon.

The man looks familiar.  Paunchy, middling height.  Round face with an angular nose.  Gray at the temples. Left arm in a sling.

Left arm in a sling?!

He half-turns and nods, eyes still on Flo.

This is impossible.  My great-uncle Leopold Müller died in the Holocaust.

I gape at him while he gapes at insurance agents singing “Heaven Is a Place on Earth,” a cappella.

When the commercial is over, he thrusts the ice cream container toward me.  A spoon stands upright in the middle. “A little help here?”

I take the ice cream.  He grabs the spoon with his one good hand, ladles out a mound, and gobbles it down.

“Whoa,” he says.  He takes another spoonful, and then another.

“This seriously has no lactose?”

Can this possibly be Uncle Leo?  It certainly looks like him. His dark suit has a late-Weimar cut to it.  Thick German accent. Useless left arm from a bullet in World War I. And lactose intolerant, which I’ve recently started to suspect runs in the family.

“That’s nice,” he says.  “I like that.” He pauses.  “Of course, they could have done ‘Leopold Eric,’ your parents.  I mean, if they’d been really serious about going that route.”

“I prefer ‘arm,’” Leo says, and he gives a theatrical glance at his sling, and we laugh.

We turn to the television.  Rachel is interviewing an immigration lawyer about child separation at the southern border.

I tell Uncle Leo I found his identity card.  “It was in your Gestapo file, in the state archive in Würzburg.”

“Ach, so someone found it! You have no idea what it was like on deportation day when I couldn’t find it,” he says.  “Where had I left it?”

“In your apartment.  The local police went in and found it and tried to get it to you but by the time it arrived, you’d already been deported.”

“Man, was Irene furious with me,” he says.  “‘You’d forget your head if it wasn’t attached to your shoulders,’ she kept saying.”  He rolls his eyes and sighs. “A wife’s job, I suppose.”

“But you know,” he continues, “having it with me wouldn’t have made much difference in the end, that identity card.”

I agree; it wouldn’t have.

“Guess what else I found in your Gestapo file, Uncle Leo?  Your World War I medals! I have them. The archive gave them to me.”

“Now those I remembered to bring along,” Leo says.  “Thought they might prove useful. Service to the Vaterland and all that.”

I nod, and we listen to Rachel and the immigration lawyer for a moment.

“But a hell of a lot of good they did me,” he continues.  “Bastards took them from me before we got on the train.”

I tell him that’s what I figured.

I ask him if he survived on the train all the way to Izbica, the transit ghetto in Poland where they warehoused people before sending them further along.

“This is not something a sane person wants to know, Eric Leigh.”

Leo turns back to MSNBC.  “You don’t want to know,” he says gruffly, and I can tell I’m getting nothing more on the subject.

“Well,” I ask, “did you make it alive out of Izbica?”  So many died in the transit ghettos, of disease or starvation, or by shooting.  “Did you actually make it all the way to Sobibor?”

I see his point.

“Give me that ice cream,” he says, and I extend the carton back towards his good hand.  He takes another two spoonfuls and we return to Rachel Maddow. She’s showing photos of rows of tents, and of children lying on concrete floors covered by think foil blankets.

“This is who we now are,” intones Rachel on the television.  “A society that holds children in concentration camps.”

“Concentration camps?”  Leo raises his eyebrows.  “This? This is supposed to be a concentration camp?”  He turns to me, confused. “This?” he asks, pointing at the screen.

Something comes loose inside me.  “I know, I know, Uncle Leo,” I gush.  “I am sorry, I am so, so sorry.” And I tell him about my two decades of obsessing over the term “concentration camp” in my own life’s work, my writing about the uprooting and imprisonment of Japanese Americans in World War II.  I tell him about how I know that the term’s authentic — that Americans actually used it back in the early ‘40s — and about how Japanese Americans still use it today and about how much pressure I’ve felt to use it myself and about how I’ve gone back and forth and back and forth and back and forth in my mind about it.  About how I finally decided a couple of years ago to start using the term, but still don’t feel quite right about it.

“Mein Gott,” says Uncle Leo.  “No sane person would spend twenty years obsessing over a couple of words like that.”

We exchange a knowing glance, because we’ve already established something about my sanity.

“If in fact I made it to the transit ghetto and Sobibor,” Leo notes, and this time it’s him winking at me.

“Yes, Uncle Leo, if you made it to the transit ghetto and to Sobibor.”

I snuffle and wipe my eyes with my sleeve, and Uncle Leo offers me a spoonful of Lactaid, but I’m not in the mood for ice cream.  A rare moment.

“Eric Leigh, I have a question for you.  What on earth leads you to think I care?”

I fall silent.  The wall clock ticks while a voice from the TV lists the side effects of Cialis.

“About what you endured?”

“About whether I’m dishonoring you?”

Leo shakes his head impatiently.  “Things didn’t start with the train, when Herr Dummkopf over here remembered to bring his war medals but forgot his identity card.”

I am blinking, listening.

I am nodding but still not understanding.

“So what leads you to think I would care about whether you use the phrase ‘concentration camp’ when you write about America?  Why would I care about that? Or for that matter about whether this Rachel person uses it when she tells people about these camps with the children on the floor and the foil blankets?”

I can’t think of what to say.

“If it helps those children in those camps, use it.  If it can keep someone from being abused for who they are, use it.”

I am crying a little again.

“If it helps make a better world, a gentler world, a world with less violence, be my guest, use it.”  He puts his good hand to my cheek. “If you want to honor me, Eric Leigh, by all means: use it.”

Rachel Maddow is wrapping up her show.  We watch the rest in silence. Or most of the rest; I think I miss a bit because suddenly “The Last Word with Lawrence O’Donnell” is on and he’s talking about Iran.  And Uncle Leo is no longer beside me.

I get up and go to the kitchen.  I didn’t feel like ice cream just a moment ago, but now I do.

The Lactaid carton is caved in slightly and a sliver of ice cream hides in the crease along the bottom.  Maybe two spoonfuls worth, if that.

“For chrissake, he ate the whole damn thing,” I harrumph.

That settles it.  Things definitely run in families.