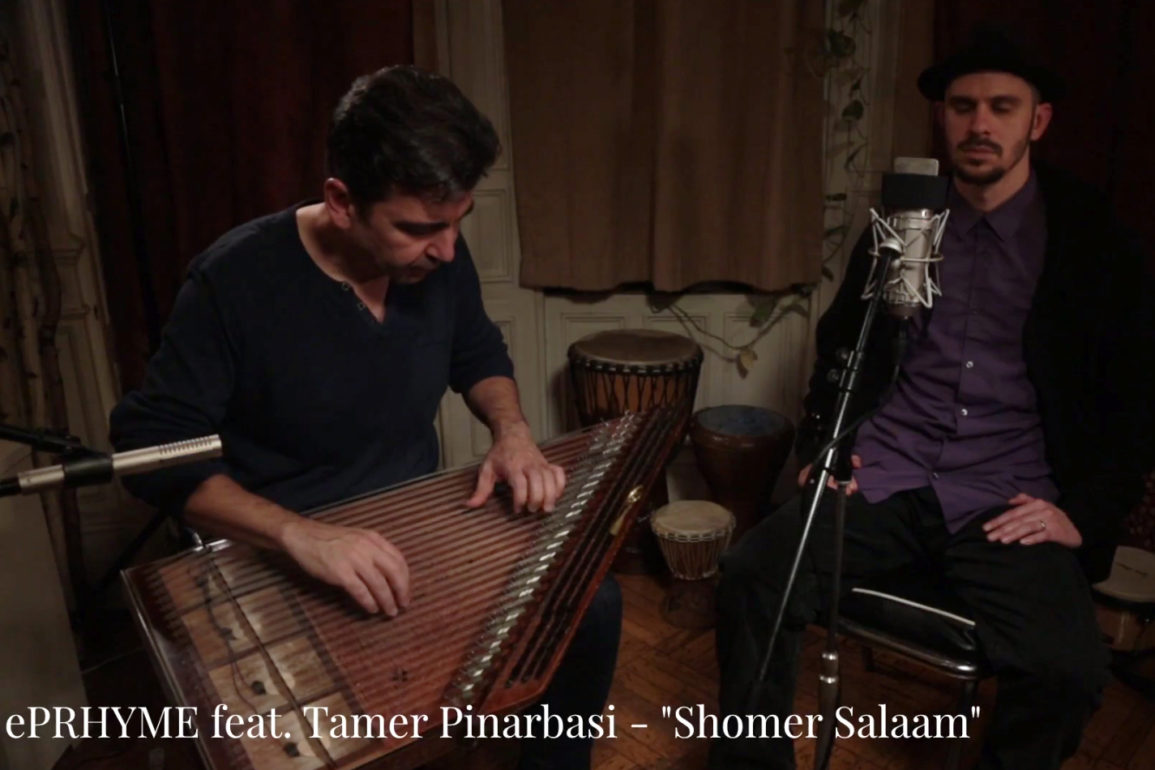 I wrote this song almost a decade ago in 2007 following the 2006 Lebanon War amidst increasing tensions and attacks between the State of Israel and the Hamas controlled Gaza Strip.

At the time I was trying to come to terms with the ways in which Jewish and Muslim religion. culture, language and custom were so seemingly similar and interconnected, and at the same time so mortally at odds with each other.

It may sound trite, but I was in the grip of that adolescent impulse many liberals experience at some point in their political development: “How can we keep killing each other when we have so much in common?!”

In response to this well-meaning but over-simplified understanding of an infinitely complex situation I wrote this song as an attempt to wrestle with the angel of Abrahamic ancestry.

In the years that have followed the situation has only gotten worse – for everyone. No one is winning this war. In the zero-sum game of “might over right” everyone loses. No matter how safe our boundaries, or how strong their international support – there are no victors on this fallow field of fallen angels and forsaken values.

I am not a politician or a propaganda machine for any “wing” – right or left. I am a simple poet who believes in the sanctity of all human life- period.

Its ultimate message is: The more we dehumanize the other, the more we deform our own Divine Image.

Make no mistake, this is no one-sided call for unilateral restraint. Peace will not emerge in the shallow space created by one-half of a blood-fued laying down their arms. The critique of violence embedded within this song is directed at both sides of this conflict. This position is based on my personal (admittedly amateur) assessment of recent history which concludes that violence has not made anyone any safer or more secure. In fact, it has literally achieved the opposite. Every Kassam rocket fired ensures more Palestinian lives will be lost in retaliation. Every strike into Gaza, no matter how targeted, ensures more terrifyingly violent responses.

Violence and force may achieve short-term survival-oriented goals (which are at times completely necessary and should not be dismissed by any means), but only communication, cohabitation and collaboration will ensure a future worthy of our children.

In closing, I want to admit something : This song is naive. It espouses an idealized and utopian perspective that purports that peace is possible, and furthermore that this possibility is contingent upon a change of paradigm and perspective.

This sounds foolish and childish I know, but as it says in the Gemara, ever since the fall of the Temple prophecy has been given over to fools and children. Was it naive and childish for Isaiah to state that one day “swords will be beaten into plowshares” and that “nations will war no more”? I am certainly not comparing myself to the great inimitable prophets of our traditions, but I am attempting to honor and channel their crazy wisdom in a world gone off the rails.

Pragmatism will only continue to breed survivalist strategies that pit “us” against “them”. Politics will continue to leave us vulnerable to the whims of the most power hungry and predatory personalities among us. Maybe we need a dose of the intoxicated voice of the poet or the impossible dream of the prophet to sound the existential alarm that wakes us all up to our impending doom if we do not realize our inevitable interdependence and inherent interconnection.

This is not the propagandistic poetry of any movement or agenda that seeks to judge or condemn or lay blame. This is the still small voice that seeks to express the most human and therefore most Divine stirrings within us. This is poetry that strives to not just acknowledge our personal or collective pain but to reach beyond it, to not just name our enemy but to confess the enemy within, to see ourselves within the other and the other within ourselves, to expand the realms of the possible, to see the sounds of the prophetic possibility that one great day we will all come to worship the ONE in the House of Prayer for All Peoples.

Trust me, I couldn’t make this stuff up – its too far out, too naive, too childish for one who reads the newspapers, or gets trolled online, or who lives in fear of constant attack. But this poetry exists deep within the bones of our tradition. May these old dry bones arise and be made living again to dance in the streets of the City of Peace speedily in our days – AMEN!

*A note about this recording: “Shomer Salaam” was originally produced and recorded by Smoke of Oldominion and released in 2009 as part of ePRHYME’S solo album “WayWordWonderWill”. The version in this video was recorded by Glenn Grossman specially for the Hevria Sessions and features Turkish Qanun master Tamer Pinarbasi.

CHORUS (based on Zecharia 4:6)

Two brothers one abba
Two nations wrestling in the belly of their momma
Now we dealin with the drama –
The conflict, karma, character armor and
Suicide bomber sergeant slaughter said, “the trauma is tangible”
Some blame it on history
While others point to mystery
To justify brutality
In the name of victory
But violence is a sword
With a blade for a handle
Like burnin down your house
Just so you can light a candle
Loved ones lost
Friends, foes and family
We’ve sacrificed our sanity
And martyred our humanity
For the promise of a land
We lie down with a lion
In the spirit of a lamb
Understand Yerushalayim*
(*poetic translation – “He will see peace(s)” – in the plural, i.e.- for everyone)

CHORUS (based on Zecharia 4:6)

But by spirit alone shall we become free