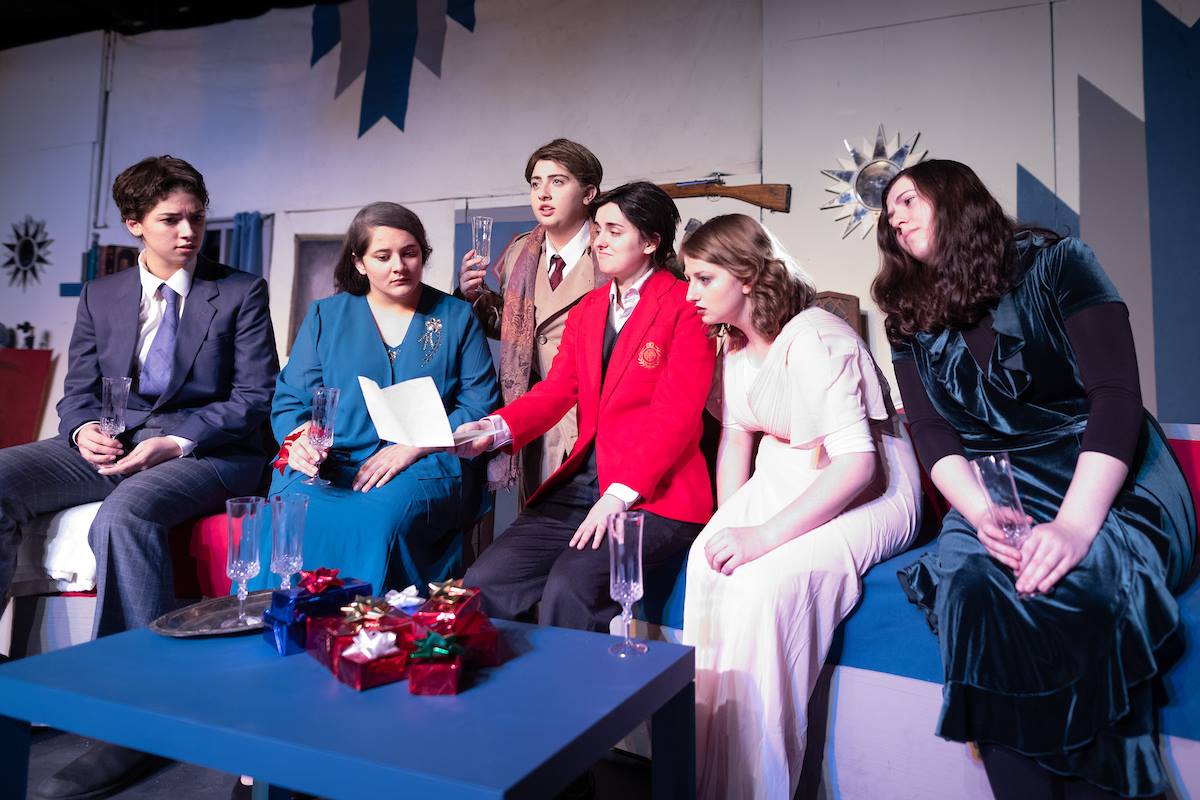 For The Women Of Stern College Dramatics Society, The Game’s Afoot

After shuffling into Schottenstein Theater on West 185 Street, I chose a seat much too quickly. I sat in the aisle of the left side of the room, immediately regretting the decision. I awkwardly stood up and moved two more times before settling into the middle of the theater. I opened a new Note on my phone and felt rude about it, but went ahead with it anyway. I scribbled down some virtual notes. The room was full of people of all ages, bustling and squeezing past each other, lovingly I’m sure. The chattering voices and shuffling feet gave me plenty to look at, but so did the set before me, elaborately designed and fully stocked. Weapons hung on the living room walls of the set threateningly. There were a lot of fun things to look at — a radio, a phone, as well as multiple doors and seemingly, places to hide. There was a coffee table covered in colorful gifts, all coated in shiny wrapping paper and stacked in a neat pile. There were couches and a chair clustered over on stage left. I was excited for the actresses to enter and start using the props; I was excited about the bright colored couches, and the blues, and the reds.

I had never heard of Ken Ludwig’s The Game’s Afoot: Or Holmes for the Holidays and was eager to see it for the first time performed by the all female cast of Stern College Dramatics Society. When the lights went down I was enthralled by the utter darkness of the room. A perfectly British sounding voice recording opened the show with a brief introduction. I was appreciative of the promise of comedy mixed with horror, and the warning that a gunshot or two may be heard over the course of the performance. In a time like today, it’s always helpful to be warned. For those like me who are unfamiliar with the play, here is the synopsis:

“It is December 1936, and Broadway star William Gillette, admired the world over for his leading role in the play Sherlock Holmes, has invited his fellow cast members to his Connecticut castle for a weekend of revelry. But when one of the guests is stabbed to death, the festivities in this isolated house of tricks and mirrors quickly turn dangerous.”

I was quick to glide to the edge of my seat as the opening scene featured one of those gunshots we were warned about. I had to give it to crew of the show, this gunshot was the first of a variety of extremely believable sound effects; from door bells, to radios, to telephones, I was convinced I was sitting in a fully functional living room that existed within a mansion I’d never be able to afford. The lines poured out fast, with precision and mastery. I felt excited by the wit and diversity of the characters, a big dreamer of a son, a doting mother with just the right amount of crazy in her. There were a few moments in the opening scenes that really sold me as an audience member, such as when William Gillette refused to answer the door wearing a robe as he told his mother he was “not eccentric,” or when a round of bubbly was poured so the friends could “really party.”

There was something very drawing about watching a stage filled with actors play a stage full of actors. There was much joy in the repetition of the line, “the game’s afoot,” which referred to the idea of  life as a game. The lines of the play were quite fearless in acknowledging that the actors were actors — “we wear silly costumes we’re all Peter Pans… We treat life and death like the greatest game there is.” The honesty lives in the reality that we are all actors and life is a game! According to William Gillette, “Shakespeare had it right — it’s all a game and if I die, I die.”

As an immersed audience member I felt oddly enchanted by what was starting to sound like dangerous propaganda. Of course life is much more than a game, and “live or die” is much more serious than “win or lose.” The danger of the farce is its convincing tendency to turn serious issues like life and death into comedy, where cast members’ murders are turned into laughing points, their dead bodies stored in the nooks and crannies of the stage. Of course audience members hang on tightly to their suspension of disbelief, but I still felt much better once I spoke to the cast of the show including William, otherwise known as Chana Weiss, at the reception post-production. The game’s afoot! And that game is life. Chana described this reference as a “balance between fun and seriousness, it’s very fun to play with that.” Chana described herself as a dramatic actor who wishes she were Homes herself. She uses her imagination to have fun with her character. I asked her how she felt about playing a male character, to which she said she was open to and excited about doing. We spoke about how she learned how to act like a man. SCDS is famous for their extremely believable woman-played male characters. Weiss recounted how she spent some time watching her professors asking herself, “how are they men? What makes a man a man? How does the male character react to all these different characters?” She noted the way they stand, where they put their hands, their body language. “Girls are more fluid, more curved, while men are more straight,” she noted.

Eli Azizollahoff who played Felix Geisel noted that she had looked up pictures of men holding cups, as men hold cups differently than women do. Eli successfully played a more outgoing, active male character with a love interest nonetheless. I was totally floored at how believable each male character was, and how unique from the other male characters on the set. The show was extremely well cast and each actress did a wonderful job of bringing her imagination and a little of herself into her character. Emily Ornelas who played the old and batty Martha Gillette (William’s mother) expressed that she enjoyed playing an old woman who was a little out of it. “It’s fun to be old, I’m old at heart.” I enjoyed Emily’s honest and natural approach to the character, whenever she spoke I found myself caught up in the musical tone of her voice.

Reuven Russell, the show’s director, was open in telling me that directing the play was much more like directing an orchestra. This was due to the amount of precision required.The production had wonderful flow and coordination, in a way it was like watching a musical with its well-timed thunder claps and synchronized speech. This was a big part of what pulled me into the farce in the first place — it was easy to believe that the script and the blocking was not the only thing connecting the players to the game.

I’ve seen many SCDS productions and it’s fair to say that access to a playing field (the Schottenstein Theater) has certainly been a huge asset to the team. While Yeshiva University politics are not the place for me, I understand that some strange rumor was stopping the women’s drama society from having access to the theater on the men’s campus. Thankfully this myth was busted and since then, the quality of the productions has only increased. It’s been amazing to see an all-women’s drama society take on challenge after challenge, including a great amount of risk taking in the plays they choose.

Shoshy Ciment, the president of SCDS and Inspector Harriet Goring in the show, was clear that she and the board wanted to take a stab at putting on a comedy. They knew The Game’s Afoot would be a challenge and they embraced it head on. I was compelled by the great deal of honesty that I felt in the play, partly because of how well it was cast. I felt that each actress played their character so truthfully and wasn’t afraid to put her whole self into it. Shoshy believes that “by assuming a role and an entirely imaginary persona, you learn more about yourself than you ever thought possible. It’s almost paradoxical in a way. But everyone has learned something new about themselves in this process, and it has been exhilarating to experience.”

Ciment hit the nail on the head when she described how SCDS differs from other theater programs. It “allows Jewish women to perform in a religious, yet professional environment. We put on plays that make people think, question, laugh and cry, and we can do it while keeping Shabbat, something that doesn’t really exist in the mainstream theater world.” Her lovable and quirky character, a police officer/aspiring actress truly fit her well and was clearly a role she greatly enjoyed animating and bringing to life. The game certainly is afoot for the fabulous cast and crew of the show. I was moved and once again reminded that the magic of theater is unlike anything else. It’s extremely meaningful to let yourself get lost in a performance and to uncover the special qualities of fiction and comedy. Sitting in the audience allowed me to view life as a game, just for a little while, and to let the actresses on stage do the living. I am a huge proponent for women in the arts and I was completely blown away by the professionalism and overall success of the piece as a whole. I felt extremely proud to sit in a packed theater on the second night of the all-woman production, and could hardly write a word during the second act as I was far too busy oscillating between laughter and utter trepidation. Bravo!