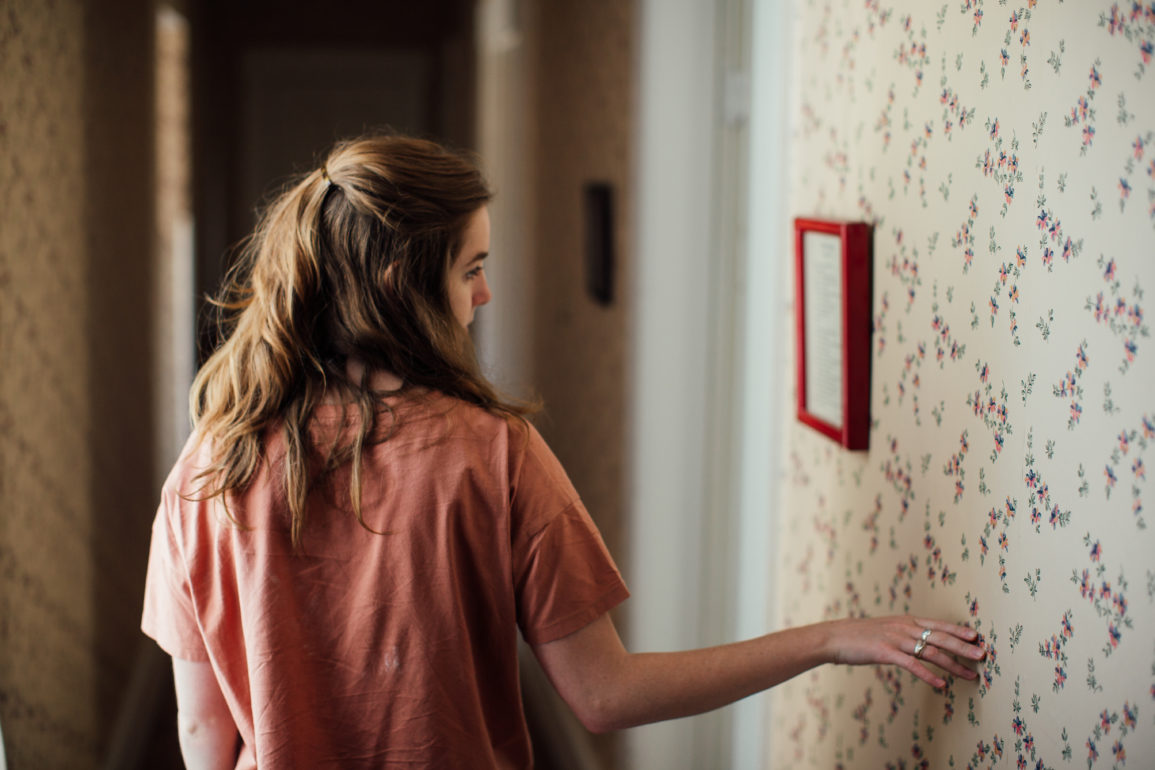 So…Do You Have a Boyfriend Over There?

My name is Emily Rose. I am 28 years old and I live in Jerusalem, Israel. I grew up in Winnipeg, Manitoba and I made aliyah when I was eighteen so I could enlist in the IDF. I served as a combat fitness officer, physically training infantry soldiers in basic training and shortly after that, I was admitted to Officers’ Training School and I became an officer. I finished my service at the rank of First Lieutenant and I still serve in the active reserves in the Home Front Command, preparing to help the civilian population in the event of a chemical attack. I graduated with a BA in the Middle Eastern Studies from the Hebrew University of Jerusalem where I learned to read and write in Arabic.

Throughout my degree, I helped fundraise for a local NGO in the city that offers aid to volunteers in the IDF and new immigrants, like me, in order to encourage them to stay in the country and help make it a better place with their innovative spirit. Three summers ago, my brother and I produced a musical that we wrote together. It is a children’s musical about bullying and it was accepted to a festival in Montreal. At the end of the summer we signed a contract with the artistic director of the Centaur Theatre, the largest English-speaking theatre in Montreal, to produce our show in his children’s series.

These are the things I mention when I am asked to stand in front of a crowd and tell my story. I don’t mention all these things about myself in order to bolster my own accomplishments. It was an honor to serve my country and I have always considered my higher education to be an extreme privilege (even while suffering through exams and seminar papers). I mention these things because, well , they seem to be of no relevance.

I’m exaggerating. They are of extreme relevance but, the truth is, that I have been away from Winnipeg for about seven years now. I left immediately after high school. I left all of my family and my friends to embark on a journey I deemed important for my own growth and for my people. Every year I come back to Winnipeg, a place I still very much consider my home, in order to visit my friends and the “village” that it took to raise me. I enjoy going to synagogue with my family and, of course, eating all the traditional family foods that we take so much pride in serving on the holidays. What I don’t enjoy is having these people ask me the very same question every year: “So, do you have a boyfriend over there?”

I have two older brothers who also come home every year for the holidays and they never get asked this question. This fall, in fact, I overheard congregants of our synagogue stopping my brother to ask him about the play we wrote together. They would ask him questions about the music, the production, the actors and then they would see me. They would politely say hello or pinch me on the cheek and say, “So … do you have a boyfriend over there?”

The first time this happened to me I was nineteen years old and I had come home for the first time since enlisting. I volunteered to serve in a foreign military (a very busy foreign military) and that is the first thing you want to know? I thought to myself. I concluded that because military life is so far from the frame of reference of the average Canadian, perhaps these people were simply looking for a way to connect with me through a common ground. I politely answered their question with appreciation for their kind sentiment. It wasn’t until my last visit that I found myself getting annoyed.

In two weeks, I will mark three years since losing a woman who was very close to me; my grandmother. The summer before she died, she had surgery and, while I was home, I went to her house every day to help her do the exercises given to her by her physical therapist (she hated them but my mom made her do them). This gave me an opportunity to ask her questions about her early life and I learned a great deal.

When I was in fourth grade, we had to do a project on the history of one side of our family. I chose to do the project on my grandmother’s side. She took me down to her study in the basement where she kept all of the family records and documents. She pulled an old, worn box out of a drawer and placed it gently upon the table. The box still bore the faded colored stripes of the Hudson’s Bay Company logo.

My grandmother graduated from the University of Manitoba’s School of Commerce in 1944. She was one out of two women to graduate from that class and, upon graduation, she went to work for The Bay.

“The war was devastating,” she told me, “but it opened up the door for women into the workforce. Businesses couldn’t wait for us to graduate. They were begging us to come work for them.”

As she worked her way up, she was promoted to floor manager.

“The Hudson’s Bay Company wasn’t just a company. It was like a family. We had staff training sessions and staff retreats. There were parties and social events.”

She showed me a dance-step booklet that was printed for one of the parties. As she flipped through the annual yearbook that the company would produce for the staff every year, I saw her eyes light up. There were pictures of young people in elegant gowns dancing and socializing. I had never really seen my grandmother like this. These faded black and white photos were bringing her back to an exciting, colorful world of a dynamic work environment . I was no longer looking through the book, I was watching her expression as flipped through the pages.

“But why did you leave?” I asked her.

“That’s how it was in those days,” she said, not taking her eyes up from the page, “when I met your Zaida, they threw me a nice farewell party. Married women didn’t work in those days.”

I looked up at her, wondering if she regretted it. Did she regret having to come home? She called me her baby girl. Did she regret me? Did she regret us? She flipped through another page until she noticed me staring at her. She put the brochure down and placed her frail hand softly upon my cheek.

“We had to choose. That’s how it was in those days.”

With a deep sigh, she carefully slid the brochure back into the box.

“The soup should be ready now,” she said, as she slid her apron back on over her skirt.

I can still hear her shoes clicking on the tile floor of the basement, fading away, as she got up and walked back to the kitchen, leaving the box, closed, on the table in front of me.

When my grandmother married my grandfather, she transformed herself into the CEO of our family. She could predict market trends and used this talent to multiply my grandfather’s doctor’s salary but never took risks she knew she could not afford. She precisely managed all the details of the family and treated extracurricular events, such as birthdays and graduations, with meticulous planning. She recorded and planned every detail.

Her eternal words still ring in my ears: “Never complain about paying taxes. If you’re paying taxes it means you are making money so just pay them and be thankful.”  Additionally, my grandmother could read and write in English, Russian, Yiddish and Hebrew. Today, she would probably be considered an invaluable piece of the workforce but, in her time, she was simply a woman. That’s how it was in those days.

My bubbie had never held a baby until she held my mother. Ironically enough, when my mother was born, my grandfather had to stay home with her and teach her how to nurse and care for the child. He had, at that point, delivered many babies and knew exactly how to take care of them. My grandmother, conversely, had only ever dealt in dollars and cents.

When my zaida so tactfully expressed at the dinner table, in front of my entire family, that he was waiting for me to have children and that his age would not allow him to wait much longer, my bubbie interrupted him.

“Quiet, Albert!” she said, “Don’t listen to him Emily. I gave birth to your uncle when I was 41 and no one is a better doctor or person than my son. You have plenty of time.”

Like a good CEO, she never needed to micromanage. I like to believe that she measured her success based upon how well we behaved towards one another, not while she was around, but while she was not. She took pleasure in knowing that we were together and working together, even if it was in her absence.

Spending the summer with my grandmother, who was beyond her time, made me reflect upon my own. Now I stand at the gateway into the workforce. Where will I choose to make a difference? How will I go about it? How will I balance my personal life with the contribution I hope to make to society? I have so many decisions to make because I have so many choices. My grandmother only had two choices: be bitter or do it right.

On the day of my bubbie’s death, she woke up early in the morning and made a brisket for Shabbat dinner. “Business before pleasure,” she used to say, which was the motto she borrowed from her own father. Ironically, business was her pleasure.  Business was her true passion and every day of her life, down to the last one, was business as usual. She went to sleep in her own bed that night. Business as usual.

A few weeks ago I was at a dinner and I was asked to speak. I introduced myself and began to tell my story. After discussing my army service, I was interrupted by one of the women in the audience.

“Do you have a boyfriend?” she asked me.

“It’s just that,” the woman continued, “look at you. You are so beautiful and I just wanted to know if you have a boyfriend.”

“Do you have a nice Jewish boy for me?” I asked, making a joke out of the scenario. Everyone in the room laughed and I continued with my speech.

My grandmother’s work ended on the last day of her life but we, dear friends, still have a lot more to do.