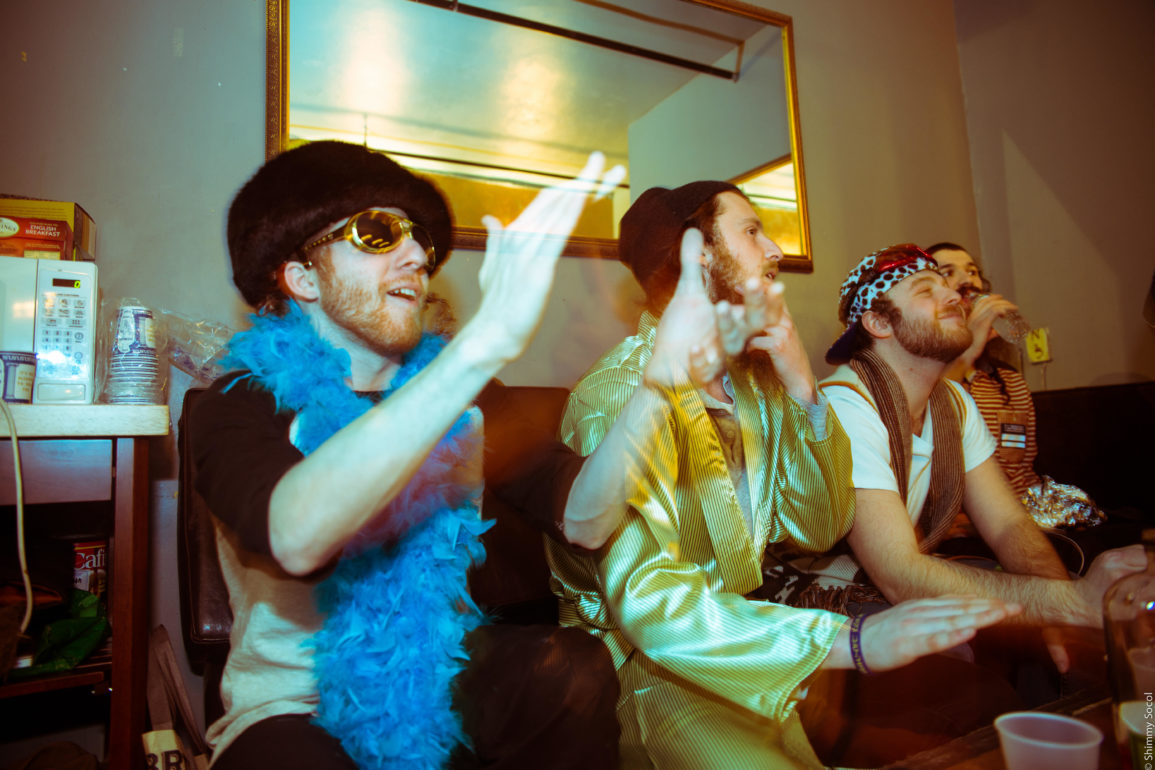 “Our mask during the year is that we’re in the music industry;

Between Performance and Prayer

During Zusha’s sound check, Shlomo objects to the sophisticated sound effects and electronic voice modifiers, crying out “I just wanna sound like me!” Far from pop’s embrace of Auto-Tune, Zusha’s lead singer expresses a yearning for rawness. Considering the band’s approach to their music as a spiritual endeavor, rather than an aesthetic production, this outcry makes all the sense in the world.

The band, often described as “neo-Hasidic” mellow rockstars, recognizes the contradictions and clashes between the purity in their musical intentions and the less-than-organic setup of a concert. “We hate the idea of ‘maximum capacity,’ of having to limit admission,” Shlomo stresses. “We want everyone to be able to pray.” In a way, this lament speaks to the dilemma of Jewish prayer in general. How does one fit the spontaneity, vulnerability, and sheer explosiveness of prayer with the obligatory constructs of time and text?

Zachariah too relates to this push-and-pull effort, striving to infuse the rigidity of a concert hall or Jewish law with vivid color, and to “find meditation in structure”.

But this tension does not especially irritate Zachariah or the other Zusha members, and particularly not on Purim. He shares with me the idea of Purim as a fusion of contradictions, an intersection of good and evil, to the point of indistinction. The Purim maxim, that exhorts a person to “consume until he does not know” (“ad d’lo yada”), indeed speaks to a level of contentment that transcends a need for order or answers, a joy borne from a comfort in disequilibrium. “It’s about being okay with being confused sometimes”, Zachariah instructs me, personifying the paradigm of the peaceful, joyful hasid.

I make a L’Chaim to “the kind of simcha that’s about presence,” and receive nods of approval from my new rebbeim. I am relieved to have spoken something that echoes truth.

Prayer is mumbling outcry, rhythmic cacophony, universal singularity, familiar shock. Zusha’s melodies reach from hearts to Heaven, but Shlomo, Zachariah, and Elisha have their eyes on the congregation.

Positive Creation in a Spiritual Context

Shlomo tells me they have sold 620 tickets to their Purim show, a number that represents in Gematria (Hebrew-numeric coding) “keter,” or “crown”. Shlomo’s face exudes insight as he emphasizes the rabbinic saying, “in the presence of multitudes is the glory of the King.”

Take the calculation or leave it, but the point is the way Zusha so believes in the power of communal presence as a dynamic force behind their creative work. Elisha makes a point of referring to Zusha as a movement. “There’s a difference between simply creating, and allowing others to create,” Mlotek explains, making abundantly clear the band’s embrace of the individual nuances each member of the “unconventional prayerhouse” brings to the sanctuary.

In this synagogue, the shlichei tzibbur (prayer leaders) occupy a stage instead of a bimah (podium), but their message is clear; their talents, instruments, and compositions are purely conduits for each person’s tefillah (prayer).

Wordless melodies- punctuated by a crowd full of uncoordinatedly graceful swaying-not the kind of “shuckling” (“quaking” in prayer) found in your neighborhood shtiebel, but the kind you would not dare call insincere- create Zusha’s liturgy, a collection of prayers that are accessible to all, that make themselves vessels for an infinity of soulful longings.

Let Me Hear Thy Voice

Backstage, the guys ask me to tell them my favorite niggun, and I spend ten minutes deliberating. Frankly, it’s intimidating. These guys are like, niggun gurus. Then there’s the issue of niggunim usually being wordless, and not commonly known by particular names. I hum in my head, and eventually out loud, and I try to feel which melody gravitates toward my mellow mind at that moment.

I choose Shlomo Carlebach’s “Hashmi’eni (Let Me Hear Thy Voice)” and the motley crew chases their L’Chaim’s on light beers with spiraling rounds of the passionate tune until showtime.

I know I have made the right choice for the occasion, and it truly is one of my most favorites (stand outside my door any Erev Shabbat).

Let me hear thy voice-

for thy voice is sweet and thy presence is lovely

I came here to hear Zusha, and to dance. I came here to be moved by something thumping and traveling through the atmosphere in waves. But honestly, this house of prayer equally demands my voice, with no sound effects and just the mixed-up, chaotic, spiritually buzzing self I brought to this holy, holy ceremony.

It’s a curious thing that people refer to concerts as “religious experiences,” and it’s not a thing with which I am entirely comfortable. But call it whatever makes sense, if not religious; there is just something in a niggun, something vibrating, moving, shaking holiness from all corners into motion.