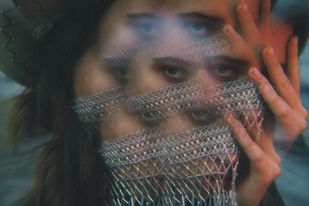 The Sound Of A Woman

I boarded and headed towards my pre-assigned seat. I felt clumsy walking down the aisle with my carry-on-luggage, a backpack, and of course, kosher snacks. The Chassidic black fedora and dark navy blazer didn’t help. I’m not sure anyone even noticed but it sure felt like they were all staring.

I was usually comfortable in my own skin but still I fantasized about blending in with everyone else. There was a more pressing matter at hand though. I just turned eighteen-years-old and I was going to study at the Chabad yeshiva in Buenos Aires. After three years at the excessively disciplinarian yeshiva in Paris, this promised to be a welcome change.

After settling into my seat, I was ready for my first movie. Of course it was forbidden, but that’s what I loved about flying. I could take in as many movies as I wanted, undisturbed. In fact, I never once slept on these international flights, lest I waste precious movie minutes. But first, music. I plugged my headphones into the seat’s audio jack and listened for the staticy airplane music.

Then I melted. All sound and movement around me ceased. I felt utterly still. A voice was floating through my ears with a silky smoothness that was totally unfamiliar to me. She sang about deer and rivers. I loved deer and rivers. Her voice soared gracefully with a seemingly limitless vocal range.

“I wish I had a river so long, I would teach my feet to fly…”

She carried the “Y” in “Fly” endlessly. When one note ended another seamlessly appeared. She was flying and I, light as a feather, was flying with her. I never heard a woman sing before. This was the first time.

The song was over and I took out my headphones.

I was browsing on the massive iMac in the children’s activity room that doubled as our office. My friends and I were in Singapore completing our rabbinic ordination and internship. Most of our responsibilities did not involve computers but still, there were two oversized, latest model desktops at our disposal. This was Singapore and the lines between luxury and necessity were blurry. I plugged my headphones into the computer and listened to some music on Youtube.

It was only last year, while at the yeshiva in Brooklyn, that I discovered rock and roll. I would stay up all night watching Jimmy Page slay on his guitar, drooling carelessly over his exposed chest. Robert Plant, a long haired god, was shrieking into the microphone, making me shiver with delight. There was the somber and cool Eric Clapton, expressionless, but still electrifying my entire body. Then, the nine minute version of Clariforniation Live at Slane Castle, followed by Carlos Santana and Rob Thomas doing Smooth. Of course, the Eagles found their way in there too.

By now, I thought myself an expert on secular music and I could find songs I recognized but didn’t really know. There was one song I couldn’t find no matter how hard I tried. I heard it only once on a flight to Argentina three years ago. All I knew is that a woman was singing about rivers and deer.

I googled and googled until finally one result showed, “Sarah McLachlan, River.” I pressed play, and there I was, melting. Everything around me went still and I was flying and soaring all over again.

I found the song! And it was a Christmas song the whole time! The deer in the song were of course Santa’s reindeer, not the deer I imagined.

We were in my one bedroom basement apartment. It was my first Valentine’s Day with a date. Not that I cared much for the holiday, but I wasn’t going to pass up a romantic night with candles and desserts and flowers and dinner followed by passionate love making.

In the morning, we sipped on freshly brewed coffee, exchanging favorite songs. We loved folk, country, and bluegrass. Our days together were like love fests for these genres. I was excited to show off what I knew so I played my favorite song. The one I never told anyone about. “River by Sara McLachlan.”

About five seconds into the song, she looked at me quizzically, “This is not Sara McLachlan’s song, silly!” She took my phone, scrolled and pressed play.

It had been thirteen years since I first and last heard that voice. I recognized it instantly. I was an eighteen-year-old Chassidic yeshiva boy all over again awkwardly boarding an airplane. I became still and everything around me ceased to exist. I was floating, flying, soaring. I opened my eyes for a moment and she was looking at me. On the screen I saw, “River by Joni Mitchell.” Her hauntingly beautiful face adorning the twilight blue album cover.

For thirteen years I hadn’t told a soul about this song. I didn’t know who sang it and what the lyrics were about. But who cares? All those years ago, I was literally flying with Joni Mitchell in the heavens and in some ways, I still am.