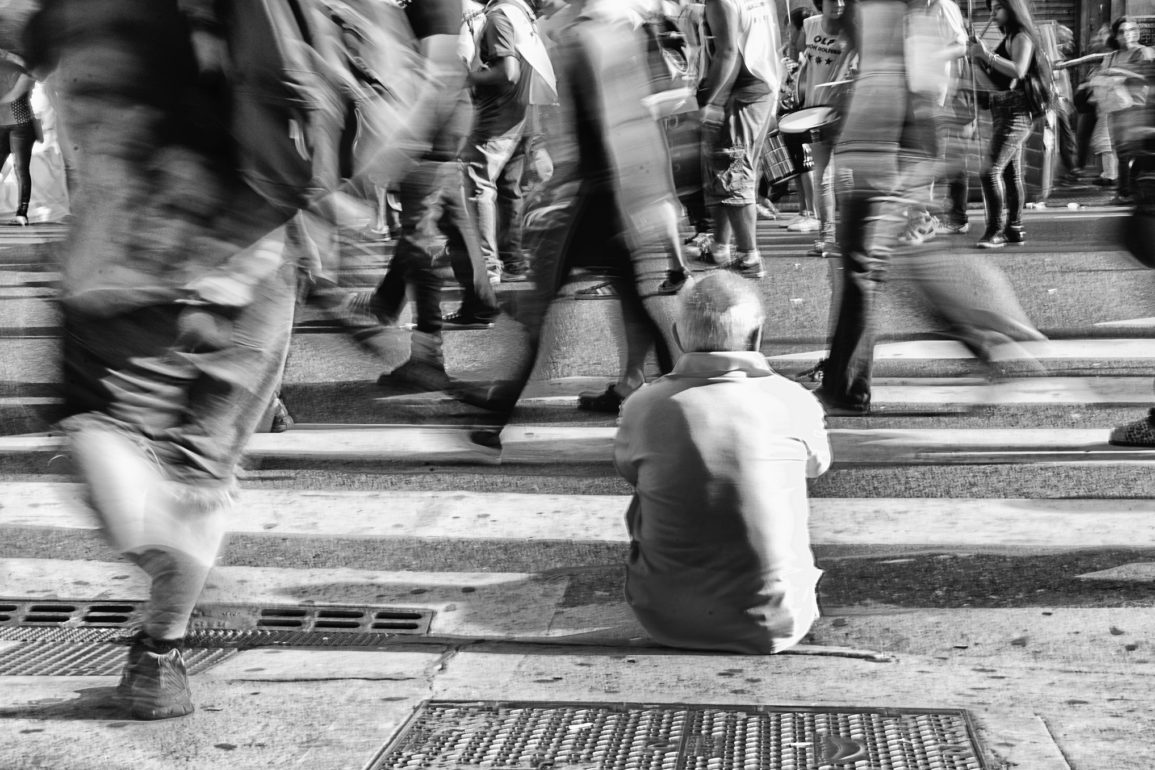 Why My Quest For Solitude Ended In Brooklyn

I’m sitting cross-legged on the hardwood floor of our Lincoln Park apartment. Grownups are walking around us back and forth chatting with each other endlessly. It was our weekly routine. The Shabbos afternoon games that we made up and loved to entertain ourselves with. We were always so scared of getting splinters in our feet. Ima always talked about waxing the floors, but even as kids we understood that it would probably never happen. It just wasn’t worth it.

Our three-bedroom apartment housed not only my seven siblings and I and our parents, but also an entire community for weekly classes, Shabbat dinners and prayer services. If we did get a splinter, or as we called it a “kotz” in Hebrew, Ima would gently, but firmly pry it out and the sting would vanish as fast as it entered.

As a kid I used to get lost in thought. It wasn’t something I was aware of as it was happening. But usually something terrible would occur as a result and I remember realizing that the term for it was “absent minded.” This was how I rationalized getting caught red-handed eating a snack after shkiah before Shabbos ended. I simply didn’t remember that it was after shkiah. I knew it was wrong but walking into the kitchen while lost in thought and grabbing a cookie wasn’t something I was particularly conscious of. It just happened.

So it was totally normal for me to realize that I missed something in the game as I was coming out of a day dream. I wasn’t considered a spacey kid but, to this day, my family teases me for what is now called an “Eliyahu move.” This could involve getting lost on a date, forgetting my tefilin on a bus in Israel or even locking myself out of my apartment twice in one night.

During this particular day dream, I imagined myself living in a desert surrounded by sand and the scorching heat of the sun, a biblically miraculous stream of water would appear nearby and I would befriend the creatures that inhabited this dessert. I would always be close enough to civilization that I could hop in whenever I felt like it. What captivated my attention was the peaceful solitude, fending for myself and bonding with nature.

For as far back as I could remember, living in relative isolation and anonymity appealed to me, but alluded me just the same. Life always seemed full of friends, family and community. Ironically, I pursued that life relentlessly. Keeping in touch with relatives and hanging out with friends is what I cherished almost over anything else in life. As I got older, I learned that cultivating deep relationships with people is perhaps what I am most gifted with.

So when I found myself living in Montreal, alone, in a downtown high-rise studio apartment the sense of emptiness came quickly. Before I could even put my finger on it, I was anxious and looking for distractions. First, I’d leave my large, flat screen TV that came with the studio on full volume as I cooked dinner or cleaned the apartment. That quickly got annoying, so listening to podcasts became my new companion.

After visiting Brooklyn for work a few times, I was quickly convinced that I needed to move here. The feeling of community and friends that I found is what I was longing for. I was once explaining this to a friend over the phone and he asked me how I would deal with my still undetermined religious journey. It hadn’t occurred to me that, precisely because I had so many friends and family in Brooklyn, living there would force to me answer questions that I hadn’t quite figured out yet.

And that’s when my fantasy of living in solitude came back to me. If only I lived in a small town where no one knew me, I would be free to finally live exactly as I saw fit. When would I finally get to do that? Was I too afraid to make that move?

In my mind’s eye I visualized a quiet New England town that I read about in novels or alternatively in the journeys of Baruch in Sefer HaZichronos. Where one can pursue a simple craft and live quietly near nature without any drama or intense social pressure to conform. Maybe that’s exactly the kind of peacefulness I was missing to make choices with clarity and simplicity.

Snap. I’m on the phone talking to a friend and there I go wandering again. Its fine, I’ve learned how to re-enter the conversation seamlessly.

After saying good bye, I thought about this. Maybe I was living out my fantasy and didn’t even realize it? Maybe I had made that courageous move, but it wasn’t surrounded by desserts and picturesque villages of the story books?

Wasn’t I living in a city where I was relatively unknown? I certainly didn’t live near anyone who knew me. I hadn’t even met one person who lived in my building yet. I was free to live as I saw fit without any pressure to conform. And I was taking advantage of this opportunity. I was learning more about myself than I had been free to do my entire life.

And I also felt something missing in this picture. I didn’t yearn for one friend or two friends. For I had those in Montreal. What I yearned for was the web of friends and acquaintances that surround you when you’re not even aware of it. It’s an undefined, intangible reality that we carry with us throughout our day.

It’s the event you never planned on going to but was casually mentioned to you by a friend you ran into on the street. It’s the friend you notice at a restaurant who you haven’t seen since childhood and saying hello after all these years brings back memories you dream about later that night. It’s the perfectly ordinary guy you meet at a Shabbos table who shares a personal tragedy that changes your entire world view. It’s the girl you keep running into at a coffee shop and ends up being your colleague at work.

This maze of human interaction creates an eco-system that ages with time the way a baseball glove fits around your hand just so after being broken into after years of use.

The emotional, mental and spiritual stimulation we surround ourselves with effects the tone of our voice, the way we move our arms and the bounce in our step.

Its ok to daydream but the real world is so much more fun. As for me, the chaos of Brooklyn feels just right.