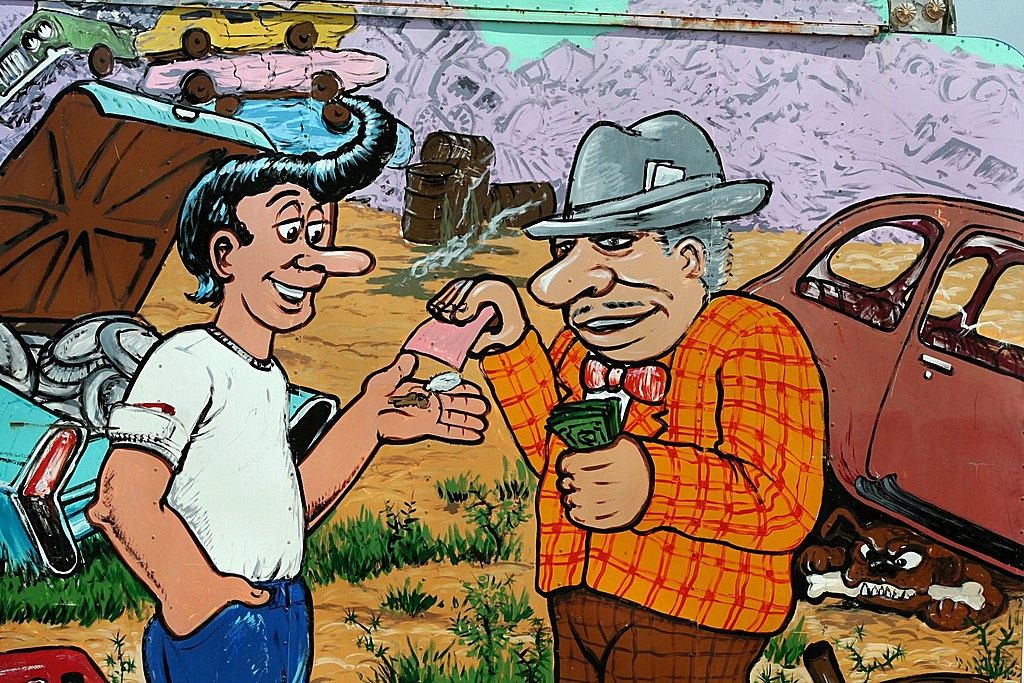 How Renting A Car Convinced Me To Wear A Kippah Forever

I had just landed in Arizona.  I had just finished my year in yeshiva in Israel and I was visiting my rabbi, my Chabad house, that had brought me in in the first place, that had influenced me to go on this crazy trip to the middle of Jerusalem, study about the things I never thought I’d care about (and incidentally also risk my life reporting about the war in Gaza and settlers being evacuated from their homes).

And now I was a fresh-faced semi-baal-teshuva fresh off the boat, back in Galut as they call it.

I still hadn’t decided about whether I would take on kosher fully or whether I should even wear a kippah.  But I was excited about Judaism and I believed G-d had given the Torah at Sinai and all that crazy stuff people judge you for believing in America.

That was, incidentally, why I was also afraid to start wearing a kippah.  Was I ready for that yet?  Was I ready to admit to the world the crazy things I believed?  Wouldn’t they judge me?  Wouldn’t I, who had worn jeans and t-shirts his whole life so he wouldn’t be noticed, suddenly be noticed by everyone?

So, for a bit, I decided, just for now, just now, I wasn’t ready for it.  Not yet, not yet, that’s what all the Chabad folks say, right?  No pushing, that’s their style, right?

I also had one other problem.  I was in Arizona in the middle of the summer and I didn’t have a car.  And in Arizona, as they say, everything is 20 minutes away (by car).  So while staying at my friend’s home, I was kind of prisoner.  I walked over to Cheba Hut, for my lunch, I tried to walk over to my rabbi’s home a bit, but I was stuck.  A prisoner to stoner food, gas station snacks, and long hot walks to see my rabbi.

I needed to rent a car.  I had one week.  There was only so much of eating of stoner food I could take months after finally kicking pot from my life.

But I also only had, like, 100 bucks.  I went online and calculated: I could rent a car for exactly  one day with that money.

My plane back to Chicago wasn’t for another ten days.

A talk with that rabbi

Rabbi Shmuel, oh Rabbi Shmuel, he has this way about him.  I hate when people paint Chabad people a certain way, and I think it’s all because of Rabbi Shmuel.  No matter how much crap I’ve dealt with while living in Crown Heights, Rabbi Shmuel is this guiding light of emunah, of belief, of total trust in his way, in the Rebbe’s way, and in the mission he set himself on.

He believes it all, and he doesn’t try to dumb it down for you, but he’ll tell it to you in such a way that it all just sounds so exciting.  Torah!  Yeah!  Separating the sexes!  Awesome!  Yom Kippur fasting! So freaking amazing!

That’s Shmuel, and he’s infectious.  And when I visited him, I had almost forgotten how much I missed his infectiously positive attitude and belief in God and Chabad and the Rebbe and any other holy Jewish things you could put into a sentence.

The day that I realized I had no money for a car, I somehow got myself to walk what was much more than twenty minutes to his shul.  I had come to see him, and I had also come to play on the XBox he had in the student lounge.

After a quick game (long game) of NBA 2k, I sat down to chat with Shmuel.  We talked about everything.  About Israel, about my time in Gaza, about how I was now starting to believe in all the insane ^*&% he had been trying to get me to believe before I left.  We talked about how my parents might take my change.

And then we started talking about those tough things: the kosher stuff, the kippah stuff, the stuff that involved me actually, like, doing things about the beliefs I had supposedly taken on.

“Kosher, Elad, kosher is a bracha.  It will be a fundamental way for you to connect to what you believe. It will make Yiddishkeit a part of your every-day life and infuse you with G-d every time you sit down to eat.”

I don’t know if that’s what he really said, but it seems like what he probably said.  Either way, I still didn’t totally buy it.  I mean, eating kosher in Jerusalem was fun.  Chicago did not seem like a fun place to be kosher (for the record, this statement is accurate).

But what he said about wearing a kippah I actually do remember:

I told him about my worries.  About being singled out.  About being different.  About the fact that people might discriminate against me.  I was really scared about that, that people would treat me worse, or not hire me or not want to be my friend because of my kippah.

He told me, “Elad.  Elad, my brother, my holy brother [I swear he speaks like this].  The fact that a kippah makes you look different is a good thing.  It will mean you are representing your true self.  It will mean you are representing God.  And, when you do what God wants, when you fulfill God’s wishes, he blesses you.  He would not make your life harder. He would make it better.”

I still didn’t totally buy it, but I agreed to try it out.  A week or something, I think.  While I was in Arizona.  A dry (heat) run.

So I put on the knitted cool kippah that I had brought from Israel that I now realize no one in America is cool enough to wear, and I wore it.

The next stop: car rental.

I went to Hertz, I think.  It was attached to Fry’s (if you are from the west coast, you know what I’m talking about, otherwise just think Stop ’N Shop or Jewel).  I felt like a foreigner, walking in with that kippah.  It was the first “public” appearance of Elad in a kippah and it felt [swear word]ing weird.  In my mind, everyone was staring at me, at this fool who believed in a book a few thousand years old and slavery and also wearing silly knitted hats on your head.

I wanted to run out, but another day without a freaking car and I would go nuts.  The desire for air-conditioned transportation overcame the fear of being looked at like a freak.

So I walked up to the Hertz counter on the side of the entrance, and I began talking to the dude.

He started asking for the standard stuff, the driver’s license, what kind of car I would want, etc.  He mentioned that it would be 60 bucks a day (I think, something that meant I could only have it for a day).

Then, right before I could say, “Hey, I’ve got like 100 bucks and I’d like that car for a week, whaddia think about that?” he interrupted me mid-thought.

“Are you Jewish?” he asked

Oh dear freaking Lord.  It was happening.  The noticing.  The people pointing out me, the difference, the weirdness.  No no no.

“Yes, I am,” I said, waiting to hear an awkward response or a dismissive nod or something along those lines.

Now, this blew my mind, I hope you understand.  I looked at him like he was the weirdo at this point.

“Oh yeah, all that Kabbalah stuff, I love it.  Yeah, I study a lot of that stuff.”

This intruiged me.  The man studied Kaballah, he loved it, he liked that I was Jewish, he was excited to speak with me.

Then he went on to explain his theory that dinosaur bones are the artifacts of an ancient civilization or something, and I started to zone out and nod calmly and pretend I was fascinated.

But I really was kind of fascinated in my own way.  Here was a person who was just going off, and he had crazy ideas, but so did I.  And we were connecting.  And he liked my crazy ideas, and even though I thought his crazy ideas were crazier, it was so cool that what Shmuel had said was happening: that positivity was coming out of my interactions, all because of my kippah.

Finally, we got back to business. He asked me to fill out the rest of the forms.  But before I could completely finish he said:

“You know what, let me do the rest for you.  You know, this is my last day, actually.  Retiring.  And, you know, I like you.  And you’re a cool, interesting Jewish person [I swear he said something like that, I swear].  And you know what, I really like you, honestly, so I’m going to do something for you.”

And he preceded to finish my form, and then mark off every possible discount he could.

According to the form he ended up filling out, I was a retiree, a veteran, an AAA member, an employee of Hertz, and I qualified for every seasonal discount on the market at that moment.

This brought the total cost for me renting my car for 10 days to about 80 bucks.

And, he was proud to say, I got the best car on the lot: my very own PT Cruiser.  So I could ride in style, you understand.

But Shmuel told me that my kippah would give me blessings, not curses.  That same day, I was put in a situation that allowed me to actually enjoy my trip in Arizona, to go visit my friends, to have freaking air conditioning, to go more often to visit my rabbi.

And I know we shouldn’t think of these things as miracles.  But I think of them as messages.  Messages from God that happen to be transmitted more easily when you have a holy person who guides you, when you are open to listening to God in the first place, when you care about growing and changing and being open to new ways of living.

That was the day I knew God wanted me to not just be a Jew, but a proud Jew.  That was the day a kippah became more than a way to stand out or fit in or get discounts.  It was the day I realized that a kippah, just like all of God’s vessels (physical to spiritual to emotional) is an inherently worthy thing.

And, most importantly, I wear a kippah because of Shmuel.  Because he is a living embodiment of who I want to become: a believer that sees that doing God’s will may be hard at times but it’s always worth it, and to just see that with clarity, to just accept it.

To just live it.