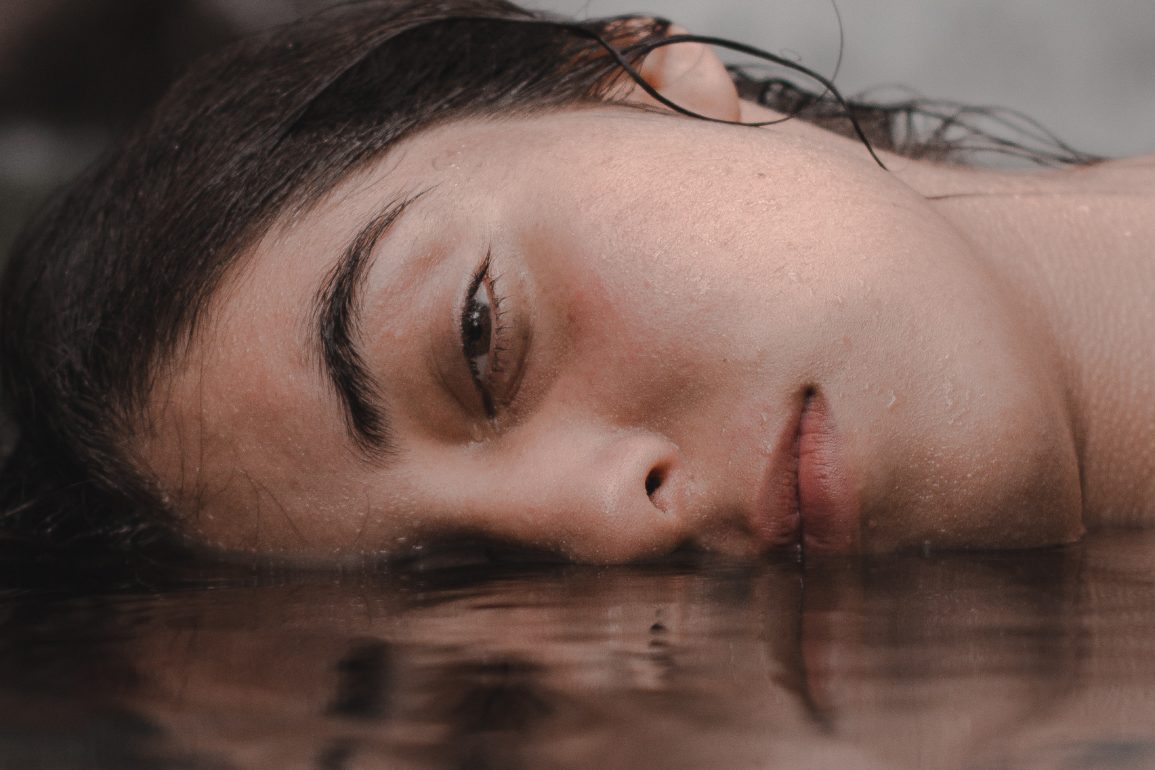 Mikvah In The Times Of Covid

Tonight was different from all other nights.

Typically, the mikvah attendant would usher me into the makeshift spa in what used to be a recessed garage.  She would pull me in with a maternal pat on the shoulder, a strong, aged, moisturized grip and sway, “Sheifele,” “Darling,” come on in.  In my thirties, it was nostalgic to be greeted like a child, ready for a warm bath.  These were nights of ritual immersion, when women bathed after they had meticulously counted five days of a period, and then seven clean days.  Cleanliness was determined by scooping a frayed white cotton square up and down the vaginal canal, and pulling it out by a cotton strip that hung down from the bedika, or “checking,” cloth for that very purpose.

There was a theme of holes, or crevices, to the ordeal.  Inside the mikvah, the laminated list of prerequisites numbering at least thirteen included this important step: Clean crevices.  Pay attention to earring holes, navels, underarms, areas under the breasts, etc.  In the bath at home, then in the bath at the mikvah, then in the shower, every pore was scrubbed with loofahs, callus scrapers, brushes, combs, scab removers, shavers, moisturizers, and more.  Like so much of religious practice, every orifice, every detail, was accounted for.

Tonight was different.  Instead of her grip, she waved a waxy latex glove across the doorway.  The brisk movement scattered a halo of glowing mosquitos frosting the fluorescent bulb propped above the entrance.  She did not offer a plush, faded yellow bathrobe.  Instead, she provided another list of prerequisites for immersion.  No laminated sheets on peach, floral stationery.  Simply a black and white printout with a ballpoint pen.

“Don’t touch anything, darling,” she called as I scampered through the tiled hallway and entered the individual washing room, where every surface was already scoured and polished with the same piety we applied to cleaning ourselves.  This was mikvah in the times of COVID-19.

Mikvah rules: Floss teeth.  Unwaxed floss is preferred, only if you are sure it will not get caught between your teeth.  Scrub with non-moisturizing shampoo and body wash.  In rare cases where a moisturizing conditioner is allowed to remove knots, wash again with hot water thoroughly.

COVID rules: Wear a mask.  N-95 masks are preferred, but only until you immerse, in which case you should leave the mask outside the bath on your own towel, so the surface of the mask does not touch the banister.  Rub the counters with disinfectants.  Use gloves and deposit disinfectant wipes in the wastebasket without touching the surface of the counter or the wastebasket.  Stand in the center of the room without touching anything while you wait to be called by the attendant.  Apply the six foot social distancing parameters to any wall or surface whenever possible.

The juxtaposition of mikvah and COVID shook my already shifting sentiments toward ritual immersion.  Over my decade since marriage, these perspectives had ranged from a tantalizing anticipation as a new bride, to a begrudging duty as an infertile married woman, to a grateful rejuvenation postpartum, to an indifferent complacency as a mother of four.  The rules morphed from daunting, to dutiful, to amusing.  Stay wet after showering to minimize the potential for recontamination during the drying process before immersion.  Lift knees one at a time so the attendant can examine toenails for any debris.  Face the stairwell and lower the back of the robe while the attendant removes any loose hairs.  When entering the mikvah, sink into the water while leaving a finger above water so that this first dip will not count as an immersion but will remove any foreign bodies that may have collected while descending the stairwell.

Years ago, women strode naked into unprotected expanses of natural bodies of water, rivers and streams.  With every passing era, precautions piled up, issued by scholars and rabbis with lips pursed in concentration, parched of the water that women once knew.  Once the rules were taken on, they couldn’t be taken back.  They piled up like a Jenga tower ready to topple.  Cleansing rituals became bewildering contradictions with undertones of bloody horror: scrub off your scabs with steel wool but don’t immerse with any blood on your skin.  Make sure there is no blood on your bedikah cloths unless the scouring bedikah cloths will make you bleed.  Thread safety pins through your earring holes to remove dust and debris but don’t cut yourself.

Tonight, the centuries of layering rabbinical rules and verdicts merged mercilessly with the countless CDC recommendations and contradictions.  We were to wash ourselves without touching the showers or sinks.  Enter the water without touching the banister or surfaces.  Dry ourselves with towels that we brought from home.  Do not let these towels touch the surfaces.  Wear a mask but not near the water.  Don’t show your toenails to the attendant because she is maintaining social distancing and cannot touch your toes.  Modern COVID superimposed on ancient tradition.  Epidemiologists and Rabbis.  Contagion and contamination.  Washing and disinfecting.  The overlay struck me as I stood inside the physical paradox that was mikvah: luminescent cream walls against sparkling granite inside a rusty, converted garage.  The warmth of ethereal steam and the stench of chlorine and sweat.

It was easy for me to resent mikvah.  I dreaded going out in the dead of winter in the middle of the night wet from showering and burdened by duty.  Sometimes, it felt as though mikvah symbolized everything about religion that constrained me: obsessive conformity, unrelenting supervision, sacrosanct piety.  Tonight, I was reminded that the meshwork of rigidity we impose upon ourselves is not spun by religion itself.  In the times of COVID, all Americans navigated an impossible labyrinth of misleading rules that may have protected our egos and consciences more than they protected ourselves.  When well-meaning community leaders attempted to follow rules of both mikvah and COVID, the results became blatantly comical to even the most pious.  On my way out that night, I stood at the exit and waited, assuming that I should not touch the doorknob with my potentially viral loaded bare hands.  The attendant approached with her hygienic gloved hand, then jumped backward when she realized that she had violated social distancing rules by standing in the door well with me.  We laughed behind our masks and wigs: at ourselves, at our piety, at humanity.

When women throughout the ages immersed themselves, they felt cleansed.  Maybe the invisible contamination they were haunted by is the same pervasive stain of the human condition.  We contain immorality and filth.  Rebellion and viruses.  Temptation and death.  We live with these contradictions, not against them.  We survive among viruses and bacteria and all the microscopic beings we want to control but are at the very mercy of.  We want to plug every hole of the human body, of the atomic universe, of the synapses of our mind, while we are swallowed by the hole beneath our feet.  Cover every pore, and we cannot breathe.  We strangle the airways through which COVID viruses come and go, through which people, dying of confinement, COVID, or of life, take their last breaths.  Wouldn’t it be refreshing, rejuvenating, to sink into chilled waters under a revealed sky, with the confident and bare-skinned faith of our ancestors, our mothers?

When I left that night, I was told to take my personal COVID checklist with me along with all my infected belongings.  Ducking behind the driver’s seat, I shoved the crumpled sheet into the glove compartment and slammed it shut.  It would be a memento someday.