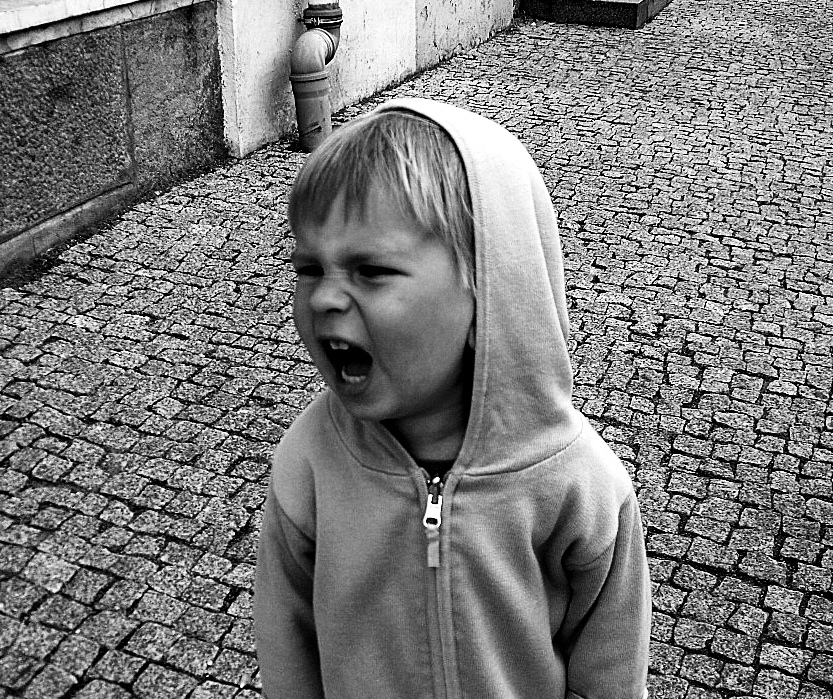 I enjoy various genres of music, but sometimes there’s just nothing better than raging, happy Na Nachs screaming snotty hardcore punk anthems about Torah and chassidus. That’s when I put on Moshiach Oi! and kick it up to the proverbial 11 (or 30 if I’m alone in the mini-van).

People, I’m one of those whackos you see driving along your nice suburban street: while sometimes I might be singing along nicely with Mr. Marley, often enough it just looks like I’m having convulsions.

I haven’t gone to a punk or hardcore show or danced in a circle pit in almost 20 years. The closest I’ve come was a few years ago at a wedding in Crown Heights, when bochurim (yeshiva students) invaded, took over, and raised the fun and insanity level to an extent I’d had no idea was possible at an Orthodox Jewish gathering. I left soaked with a joy, a high, that I had not known as particularly Jewish ever before. Nowadays, I like to put on the tunes and thrash in my car or at my desk at home or in my classroom during a break, earphones flailing out of my head.

It’s true. I like to bang my bearded freak head. Yeah.

I love their simple, straightforward, unapologetic brashness. I haven’t given up wondering when they might find a way to possibly play nearby. I read the lyrics. I follow them on Facebook. I’ve recommended them to others. Back in the day, I might have saved their flyers.

Not that I would have when I was actually 14, when punk was not yet my thing, but knowing what I know now, living as I do now, if I was 30 years younger – for every rhyme and every reason – I’d be a Moshiach Oi! fanboy. I’d want to be on their street team, wear their shirts, wave their flag, sticker light polls and walls of clubs and my mom’s car. I’d write a zine and call it Nothing. (Do kids still do that, or do they only Snapchat now?) I’d try to get in with them, maybe try and manage their merch, write their press releases. . .

For the sake of everything good, pray for them. And for my poor wife.

There’s no help for me. “To me, Judaism is like punk rock,” he said. “Real Judaism is very in your face. The world is chasing after desires for money and sex and drugs and materialism, and Judaism is the opposite. Judaism is like, this world is nothing. This world is only to serve God and bring light and redemption. To me, that’s very punk rock.” ~ Yishai Romanoff, lead singer of Moshiach Oi!

Every time I put on their second album, This World Is Nothing, I play it again. Although it’s better produced and more mature than their debut, Better Get Ready, both are full-throttled fun.

Every song is steeped in Yiddishkeit and punk idealism.

Punk is essentially rebellion against the status quo, the mainstream. Is there a more Jewish idea than that? And punk rock has gone through and includes many styles and sounds that fade away and get resurrected, but what has always remained is that independent, stand against, forthright philosophy delivered with a wall blasting punch.

Moshiach Oi!’s sound includes elements of straight up punk, hardcore, a spatter of ska, and thrash. Old schoolers will happily recognize elements of Agnostic Front, 7 Seconds, D.R.I., Agent Orange, G.B.H., Sick Of It All, Black Flag, and so much more. You’ll hear an ethos of faith similar to that of the straight edge in Youth of Today and Minor Threat. You’ll remember 7 Seconds singing “Young Till I Die,” D.R.I. singing “Suit and Tie Guy,” and Black Flag’s “My War.”

Your neck will be sore, as will your throat from singing along, and your cheeks too from the pure joy of it all. “What a pair of lungs! . . . It felt wonderful to be alive to hear it! I’ve gone looking for that feeling everywhere.” ~ Denis Johnson, from the story “Car Crash”

Moshiach Oi! songs are the unrefined poetry of loud love for Hashem and Rebbe Nachman and his chassidus. It’s wake-me-up-because-I’m-walking-the-right-way-but-I’m-not-moving kind of music. Beautiful, screaming life.

The cathartic power of a primal scream can not be underestimated. To scream is to pour forth and empty – tension expelled, body cavity rejuvenated, your soul stretches back into crevices once layered with the plaque of negativity or anger or frustration or fear.

To yell, to chant, to sing, to yelp, to whoop, to YEAH!, to cry, to Ginsberg-howl from the raw pit where sickness and coldness are born alongside angst and sadness and righteous indignation and iron pride and turn out an anthemic sound of praise, of desperate glory, of celebratory, staunch joy for fighting the good fight for Hashem – this is to turn inner darkness into light.

And to have Moshiach Oi! do it for me makes it all the better for everyone else involved.

Avraham was a punk rocker
Smashing all the idols, yea, he never could be conquered
Thrown into the fire for daring to resist
Giving us a reason to exist When Yishai shouts, “Avraham was a punk rocker,” I get it. He stood apart. Avraham stood alone on the other side of the river. The whole world thought he was wrong. But he knew he was right. So punk. So Jewish.

Dear Jew, no matter what you dress like, talk like, eat like, or pray like, you are never going to be just like everyone else. Avraham started it, and we’re still on the other side. To be a Jew is to be punk.

“Throw Away Your Brain” is a deceptively simple song. It tackles a particular concept that’s approached from various angles in chassidus, or so I’ve heard. Chabad chassidus teaches about the power of the intellect, others might focus more on the emotional aspects of our personalities. I’m not knowledgeable enough to say anything didactically legitimate about any approach, but my 15-year-old son got hooked on a lesson he learned last year, his first in yeshiva, that makes a lot of sense and which is articulated in this tune: thinking too much can also be a detriment to the simple purity of faith. As a martial artist, I’m quite familiar with this concept, the brain getting in the way.

In their single, “Got Nothing On Me,” featured in the video above, Yishai cries, “My crew’s on fire for Hashem” and “Many waters can’t put out my flame” and “My Nefesh Elokis gonna reign supreme/Na Nach Nachma Nachman MeUman/Got nothing on me!”

They are singing my song, the song of my people. Or a small minority among the minority of my people. And, yet, it’s not like we’ll start seeing bochurim wearing Moshiach Oi! shirts and passing out stickers. Or will we?

So, I know that’s only three songs, but it’s taking you longer to read about the songs than it would to just listen to them while reading the lyrics, and at their Bandcamp pages you can do both.

At the end of the recent holidays, we danced in circles with the Torah in our arms, raised our voices in song, celebrated like there was no tomorrow.

It’s tomorrow. We ought to still dance in circles and raise our voices in song.

We need to rage against galus.

Come around my way
But I know the games you play
Just when you thought I was feeling weak
Na Nach Nachma Nachman MeUman!
Got nothing on me