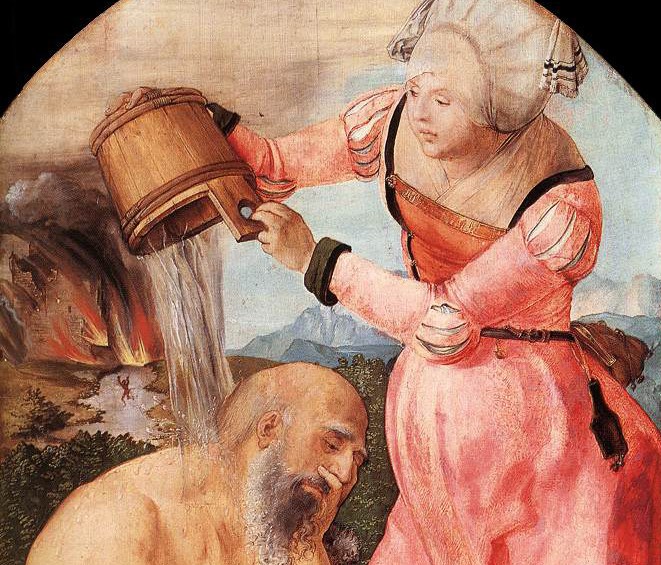 The Surprising Faith Of Job’s Wife

Job took a piece of broken pottery and scraped himself with it as he sat among the ashes. His wife said to him, “Are you still maintaining your integrity? Curse G-d and die!” He replied, “You are talking like a foolish woman. Shall we accept good from G-d, and not trouble?” — Job 2:8-10

My daughter died in 2015. She was twenty-six. As a bereaved parent, I relate to the wife of Job. Her reactions, implied or explicit, are rich with pathos. Protectiveness, fear and fury at injustice are quite common while mourning. With a few well-timed snippets of dialogue, the author of the Book of Job displayed prescient insight into grief that is well supported by modern research.

Job’s wife has been cruelly abused by history: harridan, shrew, harpy.  She is alternately ignored or portrayed as Job’s impious and impatient spouse, fed up with her husband’s silence and naiveté.  A grieving Job snaps at her for suggesting that he would be better off by simply ending it all with one round of curses. She is often casually dismissed as a one-dimensional plot device that represents Satan’s view—G-d failed to hold up his end so who needs him?

We do not know her name but she was not merely “Job’s wife.” She was a companion and a mother, not an appendage, another of Job’s wrong-headed comforters, or a cranky walk-on cameo in Job’s epic tale.  She too lost ten children; the sons and daughters she carried in her womb, whom she suckled at her breast. The destruction of material goods is a passing inconvenience in comparison. The life she built with her husband has all but vanished. And now this thoroughly decent man is plagued with boils.

Pause a moment to consider the faith involved. Job’s wife has no doubt whatsoever that G-d exists. Oh, he lives all right, just look at what he’s done. Her children are dead, her life shattered and now G-d picks on her husband. Unlike the visiting friends, she surely knows that they have done nothing to deserve such misery.  It is entirely unjustified, unfair, obscene. How could G-d do this? With a god like this, who needs enemies?

The death of a child, nearly without exception, causes a sense of abandonment and crippling guilt in the bereaved.  Job and his wife may have been surrounded by friends, but as with bereaved parents before and since, they almost certainly felt terribly, cruelly alone. Job’s wife will likely have felt she failed her children somehow and so, in a common reaction, she latches onto the one person she has left in the world. She is protective of Job, viciously defensive against anyone, human or divine, who would do him harm. At the same time, she is impatient and in her sorrow lashes out at the man she would protect, another trait of mourning.

Upset and with no one else handy, Job’s wife fusses at her husband. She insists that Job curse G-d and in so doing, die. Her approach is frequently typified as shrewish; Job’s response is commonly trotted out as a righteous rebuke. But it occurs to me Job and his wife are following a pattern of grief. Their pain seems unbearable. They snap at each other.

Bereaved parents have a shocking ninety percent divorce rate within the first two years; it remains in the high eighties for the first decade. This does not mean divorce is inevitable.   Rather, it indicates the extreme stress of grief, the need for attention to our actions and the importance of giving ourselves time. There are many complex reasons for the high divorce rate but one common thread is precisely what happens in the Book of Job. They are hurting so they quarrel.

Job and his wife behaved as many of us do in the shock of loss.  Emergency room social works at Harborview Medical Center in the Pacific Northwest have identified numbness, internal conflict and guilt as initial responses to a traumatic, unexpected loss.  This can be accompanied by loss of self-control, reduced energy, lack of motivation, traumatic and separation distress, bewilderment, disorientation, loss of perspective and decreased engagement in life.  It is not uncommon to turn to familiar behaviors. In the severity of grief, we may say and do what we think is expected of us. Later, as the finality of the loss presses upon us, we may be beset with questions and frustrations.

We are not alone.

In the first terror of losing his children, Job tears his robe, shaves his head and repeats almost by rote: “The Lord gave and the Lord has taken away; may the name of the Lord be praised.”  This was not his only response. He did not curse G-d, as his wife in her anguish demanded, but he would come to curse the day he was born. For the next thirty-seven chapters, Job rails, cajoles, pleads and demands an accounting of G-d. He says G-d has denied him justice and brought his soul to bitterness.  “For sighing has become my daily food; my groans pour out like water,” Job cried. “I have no peace, no quietness; I have no rest, but only turmoil.” And later: “If ever my grief were measured or my sorrow put on a scale, it would outweigh the sands of the ocean: that is why I am desperate.” Job asked why sixteen times.

Job refused to relent; he demanded answers. At the end of the book, G-d stands with Job, declaring that Job spoke correctly about him in all his anguished questions.  Later G-d would list three men of great righteousness: Noah, Daniel and Job.

Grief experts have found that anger towards the divine is a common reaction.  A sudden unexpected loss often leads to a crisis of faith. This is true regardless of one’s belief: church-goers question G-d’s omnipotence and love; others wonder if G-d is unjust and demand to know why; atheists find themselves reevaluating their convictions.  For the faithful and the profane, the death of a loved one is a burden under which our previous beliefs may crumble.

Shall we condemn out-of-hand a grieving mother who furiously defends her innocent husband? As Job was honest with G-d, so too was his wife. She did not meekly accept this turn of events. One would be callous, indeed, to belittle a mother who had lost ten children and is watching her husband suffer.  Before we judge, we might consider what is absolutely clear throughout the Bible: the grieving have a particular place in G-d’s heart. As another bereaved parent, King David, sang so eloquently, “The Lord is close to the brokenhearted.”