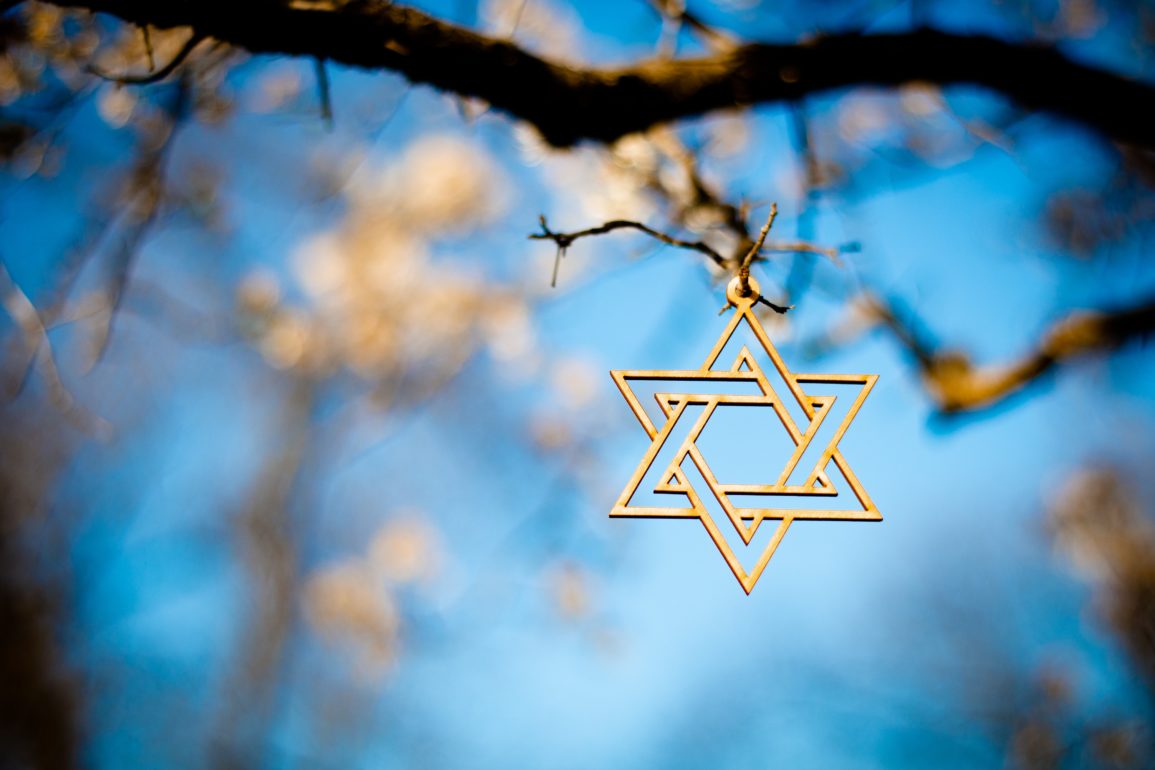 After years of encouragement from my family to be Jewish—studying Hebrew and Jewish history in Hebrew school, becoming a bar mitzvah, and thinking of myself as a link in an unbroken chain stretching all the way back to Moses and Abraham—I am surprised to meet resistance when I tell members of my family that I am now observant.

I’m trying to become a “good” Jew, but it’s as if I step over an invisible line and fail to see the Do-Not-Cross sign. With each new ritual that I add to my life—refraining from turning on lights on Shabbat, eating only kosher meat, praying twice and sometimes three times a day—I unwittingly cross into territory that many in my family consider off-limits. For them, these rituals are part of our past, no longer relevant to our lives.

Many of my new Orthodox friends, however, and a few family members, are pleased that I’m carrying on the “old” ways and following tradition. My brother and I receive numerous invitations to join our Orthodox friends and their families for dinner on Friday nights or lunch on Saturday after shul. These invitations to join them at their Shabbat tables give us a chance to learn more about being observant from the inside instead of feeling like we are outsiders peering into an Orthodox world.

On these Shabbat afternoons, I feel as if my brother and I have been adopted into a new family. Our own family after Mom’s death feels shattered into bits and pieces that we’ll never be able to put together again. Dining with our friends gives us a renewed sense of wholeness, and the chance to observe Shabbat together gives us a sense of completeness that we lack at home.

But the more delight that I take in observing Jewish rituals, the more Jewish books I read, and the more I live life according to the rhythms of the Jewish calendar, the more isolated I begin to feel within my own family. I feel like an outcast.

Each week, as I prepare for Shabbat, I feel more and more distant from Dad. He is observant in his own way, but he doesn’t feel the need to attend services every Shabbat, nor does he seem pleased that my brother and I are observing Jewish law with such devotion. A loyal Jew, he supports our synagogue and the State of Israel with annual donations. He cared for his parents as they grew old and infirm. He tried to teach Hebrew to my brother and me when we were younger. But now he dislikes our increasing level of observance. It’s fine to keep kosher at home. Dad provides us with enough money each month to buy kosher meat and other kosher products. But if we eat out together at a restaurant, he feels we are taking things too far by refusing to eat non-kosher meat and restricting our order to fruit salads or cold platters of canned fish. He doesn’t stop us from practicing our new Jewish lifestyle, but he isn’t pleased.

When it’s time to prepare for Passover, my brother and I spend the evenings after dinner cleaning the house. Dad keeps telling us that we are taking things too far. He doesn’t deride our efforts to search for chametz with such care, nor does he try to prevent us from cleaning the house, but he points out that he thinks we are being foolish and wasting our time. What we are doing—the intense cleaning, the scrutiny of floors and cupboards and drawers for crumbs—feels almost radical.

In our own way, we are challenging Dad’s authority, as well as his definition of what it means to be Jewish. Perhaps we are even trying to push him to acknowledge God or to express his own beliefs and fears and feelings, as a way of encouraging him to break his tradition of silence. Since losing Mom, he refuses to say anything on the subject of God or life or loss. Yet he supports our participation in daily minyans and our weekly attendance at Shabbat services, even though he never shows an interest in joining us on our walks to shul on Shabbat or holidays.

We live under Dad’s roof, and for that we are grateful. But in the months after Mom’s death, as we re-define ourselves as Jews, we make Dad’s life uncomfortable. He’d prefer, I suspect, everything in our life to return to the way it had been before Mom’s death. He doesn’t understand—in the same way that I understand—why Mom died. He scoffs at the idea that God is punishing us for not following Jewish law more faithfully. He dismisses the notion that, if we don’t become more observant, God might take our lives, too, and cause intolerable suffering in the process.

It never occurs to me that Dad’s grief might take him in a different direction. I don’t see the extent of his generosity, or how his love and patience as a father gives us a chance to work through our grief in our own way. He doesn’t impose his views on us, even though we aren’t quite as tolerant or accepting of his views. As I learn more about Judaism each day and live each day more fully as a Jew, I don’t see his patience or generosity. I see only his opposition to the direction that my brother and I are taking. I hear only his objections and counter-arguments. I don’t think he’s opposed to what my brother and I are doing. He is simply doing something else to help himself heal from mourning and grief so he, too, can move past the pain of losing Mom.

Before Mom’s death, I don’t think of Dad suffering in the same way that I might suffer. He goes off to his office each morning and returns home each night, providing the stability and resources for us to live a life of relative prosperity. He loves his work, and he loved Mom, and I never give any thought to the life that he might have lived before he met Mom and became a father.  I never imagine him unhappy. Even when he tells us about the worst years of the Depression, he sounds optimistic, full of faith and hope and dreams. It’s only when Aunt Sylvia reveals to us that Dad suffered a crisis of faith years before losing Mom that I begin to understand a little more about Dad.  “During World War Two,” she says, “your father lost his youngest brother, Benjamin, and the loss hit him hard.”

Uncle Nate tells me how he and Dad return to New York from their Army bases to claim Ben’s body when it’s unloaded from the trans-Atlantic convoy ship that docked at one of lower Manhattan’s piers. It is the only time, Uncle Nate says, he ever saw Dad drunk. Staggering, stone-blind, drunk. Together, they drink so much liquor to drown their sorrow that they stumble out of the bar in each other’s arms, barely conscious, and accompany their brother’s body to its final resting place in the family cemetery in Connecticut.

I never learn how Dad finds a way to move on from that tragedy because he never speaks about it. He must have sidestepped grief, ducked its heavy hammer blow. Somehow he manages to slip past it without changing his life or following a different path. He doesn’t wallow in grief. He doesn’t alter his lifestyle or turn to God or adopt Orthodox practices. If anything, the death of his younger brother makes him more determined than ever to succeed in life and to live each day to the fullest. He remains respectful of religion, but refuses to grant it authority over his life. He continues to live the life of a loyal Jew. He attends High Holy Day services each year. He celebrates festivals and Shabbat on occasion. He works on Saturday mornings, so he is unable to attend every Shabbat service, but he attends services when he has the time or the inclination. He doesn’t abandon Judaism. He doesn’t give up his faith. He simply won’t let it dictate the way he lives his life.

Before losing Mom, I realize, Dad lived this way for more than forty years. He must have forged certain principles after losing Ben, and these principles or beliefs are the bedrock of his life. He never speaks about them, not once, so I can’t really say what they are. But I’m certain that they guide his life. Dad eats kosher food at home. He treats people with kindness. He helps those in need. By observing his behavior, I deduce the core principles by which Dad lives his life. They are Jewish principles. They are the values that he draws from his understanding of Judaism. These are the values that he tries to pass on to my brother and me.

If Dad possesses a mantra, it is “Everything in moderation.” He believes in not overdoing things and refrains from doing anything in excess. No binge drinking or eating; no sudden diets; no forced fasts to lose weight; no excessive exercise. Not too much or too little. Find a balance.

It’s important for Dad to strike the right balance, not only in Jewish life but in all of life. Our family is neither too observant nor too liberal. We observe a brand of Judaism that places us somewhere in the middle, a place between Reform and Orthodox, called Conservative Judaism. It is that place of moderation where Dad feels most at home.

Where Dad sees moderation as strength, though, I see it as weakness, an example of indecisiveness, and, to a larger degree, cowardice. If I want to live life as a Jew—an observant Jew—I feel I should have the courage to demonstrate my faith by eating kosher food at home and outside the home. I should be brave enough to wear a knit kippah like my Orthodox friends and proclaim to the world my identity as a Jew and my faith in God. But Dad views this kind of behavior as excessive, beyond the safe boundary lines established by moderation. He grew up in a generation that learned the hard way that it could be dangerous to draw attention to oneself as a Jew. I see it as a matter of being truthful and honest.

I am tired—and a little ashamed—of always having to hide my Jewishness. If Judaism has any merit, anything worth fighting (and dying) for, why am I expected to hide my Jewishness, keep it from view? Why can’t I reveal my belief and show my true self? I want to act on my growing passion for Judaism. But, at the same time, I am afraid of being too Jewish and of going against the wishes of my father.

Summer turns to fall, and fall turns to winter. Darkness comes earlier each night, and each morning it fades later and later. My brother and I go early each day to the nearby shul to say Kaddish. I sit and pray in the small sanctuary, half asleep, huddled over my siddur to keep warm beneath my cotton tallit.  Listening to the soft rain or frozen pellets of snow beat against the stained glass windows, their brilliant colors muted in the pre-dawn grayness, I think of Mom and Dad and our family and how much it has changed and is no longer the way that I remember it.

In the murmurings of prayer, I try to find meaning. In the unfamiliar Hebrew words on the pages in front of me, I try to make sense of where I come from and where I am going and the lines that I need to cross. I try to discern a path, the faintest trail, leading into the future. —