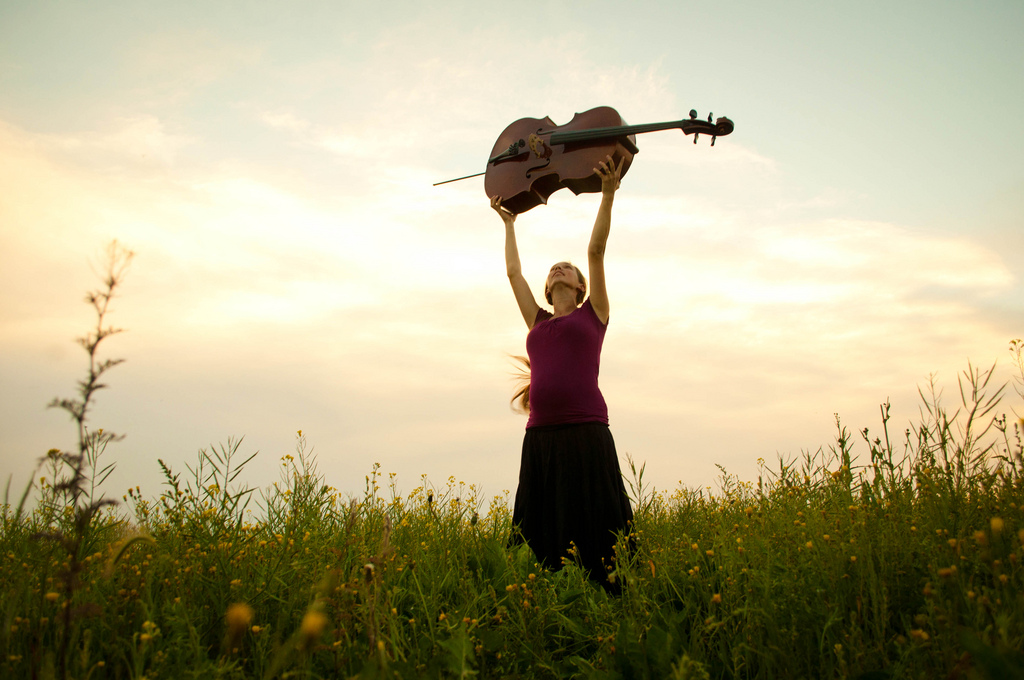 Why I Refuse To Quit the Cello

A year after my mother died, I found myself alone in the house.  In an uncharacteristic move, I snuck Ernst Bloch’s Schelomo for cello and orchestra out of my father’s CD collection and put it on in the kitchen.  It was during the second orchestral tutti section that I felt something snap.  I broke.  I broke for the first time since I saw her dead.  Cold.  And gone.  I broke for the life that I had been able to hold aloft until now, keeping my family together through denial and putting on a brave face.  I broke for the parts of myself I had shoved away so violently, promising I would never look back.  I broke for the cello that remained in its case, unopened and unplayed since shortly after she died, to the dismay of my teachers and colleagues, and the desperate pleas of my family.

I couldn’t run away any more.  This music, this soul, was not leaving me, no matter how hard I tried to turn my back.  This complicated relationship, mine with my cello, is the one I loathe the most, and the one that I love more than anything.  To this day, it’s the one that I ache for every moment that I don’t play, and the one that stops me from picking up my instrument even though I know it will always make me feel whole.  Even though I know how much I love it and it loves me.  Even though I know it’s one of the biggest reasons I’m here in this life.  Yet I still don’t play as much as I know I should.  I deny myself the very thing that I’m starving for, retreat, and yet again rely on talent and faking it well to get me through.

I remember the day that I decided to quit.  It was one of the first times that I felt that deep voice inside me; the one without doubt, and always the message that I know but don’t want to hear.  “I can’t do this anymore.  I can’t live this lie.”  I couldn’t die like my mother did, not knowing what I truly loved, living for others, coasting on this cursed talent that made me play like an angel while my heart was screaming at me to stop.  I couldn’t continue to ignore the corruption, the hypocrisy, the elitism, and all the lies that I was telling to keep myself playing.  I couldn’t continue to only do this for my family and the happiness of my teachers.  I couldn’t be that perfect little girl who would answer to the smiles and nods around her that she wanted to be a cellist when she grew up.  I could no longer continue to do something just because I was good at it, just because others cried when I played but I left the stage feeling cold and lacking.  No more.

I went cold turkey and lasted a little over a year.  Surprisingly, I didn’t miss it.  Though I sometimes dreamed about playing, I didn’t yearn to put my fingers on those strings and feel the instrument vibrate under my touch.  I was cold.  Indifferent.  It was a door I had closed, and even though I hadn’t discarded the key, I never double-checked to make sure I hadn’t lost it.

I responded angrily whenever anyone asked how I was coping and why I wasn’t playing; stating that I was fine – I was better than fine and ranting about how talent was a drug and all my success as a cellist had just been feeding an unhealthy ego that thrived on being better than others.  There was nothing beautiful about being better than everyone else.  I bashed the music world, the politics I had seen, the backstabbing.  The hate that I felt from my colleagues when I did well at a competition, and the fake support when I failed.  The idealization of my teachers, the expectations.  The vile talk of other musicians.  The gossip.  The pressure of always being the youngest, being stared at like some alien, and never having friends.  The turning up of our noses at other art forms, at lesser music, meanwhile struggling desperately to fill the concert halls, because deep down our audience knew that we were on stage for the wrong reasons.  In my eyes, the classical music world had turned into an evil monster, with twisting vines and thorns, destroying itself from the very pit of its blackened heart.  I was glad to leave, and thankful to get out.

But in the kitchen that day, listening to Bloch, I realized that I was the liar.  I had slammed a door on the purest, most innocent part of my soul.  And for what?  Because the world it was born into wasn’t as good as what it deserved?  Because I was too weak to give it what it needed?  Like a baby crying out for its mother, I had denied its outstretched arms, turned the key, and plugged my ears to the cries.  When that tutti section reached its climactic point I felt the snap of that door coming off its hinges, and when the dust cleared, couldn’t believe that what was behind it hadn’t died; it was alive, healthy, eternal, and still wailing for my arms.  I gathered that tender part of my soul and wept with it.  “I’m sorry.  I’m so so sorry.”

That day I played again.  And though I tired easily, my body remembered well.  My soul swelled, finding itself once again.  I realized that it had always been this way: that I had always loved it this much, I had just been too messed up to claim it for myself.  And I realized that I could do this,  I had to do this.  Despite my destructive self, despite the imperfect music world, this was what I needed to do.  And I knew that it was going to take the rest of my life to figure out.

A year later I performed that same piece with orchestra; my dark red dress matching my dark red cello, matching my bleeding heart.  My lone voice crying above an orchestra that gave everything they had, a conductor that pulled out even more than they thought they were capable, and me pushing beyond the brink.  When that second orchestral tutti soared behind me, I felt that part of my soul break again, and there, in front of a full house, I, the blonde cellist, wept.

It’s over a decade later and I still haven’t figured it out.

But I know that music is going to save the world.  I believe this with everything I have.  Because it has saved me.

I see it on the faces of my students, when they close their eyes while they play and understand their place in this world.  I see it in myself, when I pick up my cello, even if it’s just to tune the strings, and feel that peace settle over my body like a drug addict as I feel it vibrate, in harmony with everything around me.  It’s what I always go back to, when I lose my Emunah, when I lose myself.  And I love it more than words can begin to convey.

It’s still the most complicated relationship in my life; I am jealous of those pure musicians whose musical souls remain uncorrupted, whose playing shows conflict and tumult because of other areas of their lives, not due to music itself.  I still yearn for that peace and understanding within myself, for the ability to pick up my instrument without the struggle of wanting to run away every single time.  I wish I could relate to my audience without the guilt, without feeling like I’ve been given a gift that I don’t deserve, that I don’t have the ability to give what it deserves.  I wish I could squash that ego that still lives and breathes, that gloats at my natural abilities no matter how hard I try to squash it, no matter how hard I try to earn that talent honorably.  I wish that the purity, the sense of place, the knowledge of myself and the world every time I pick up my instrument was enough to keep me from putting it down.

Deep down I know that it is enough.   I’m just not there yet.  Music the language of the angels, and it’s my bridge between this world and the real, infinite world that exists beyond the things we can see and touch.  It’s black and white notes on a page, stark, dead, which turn into connections, colors, feelings, and an understanding that is beyond anything else I have encountered.  I may be conflicted, and I may be broken.  But I know that embracing my cello, not turning away from it, will make me whole again.