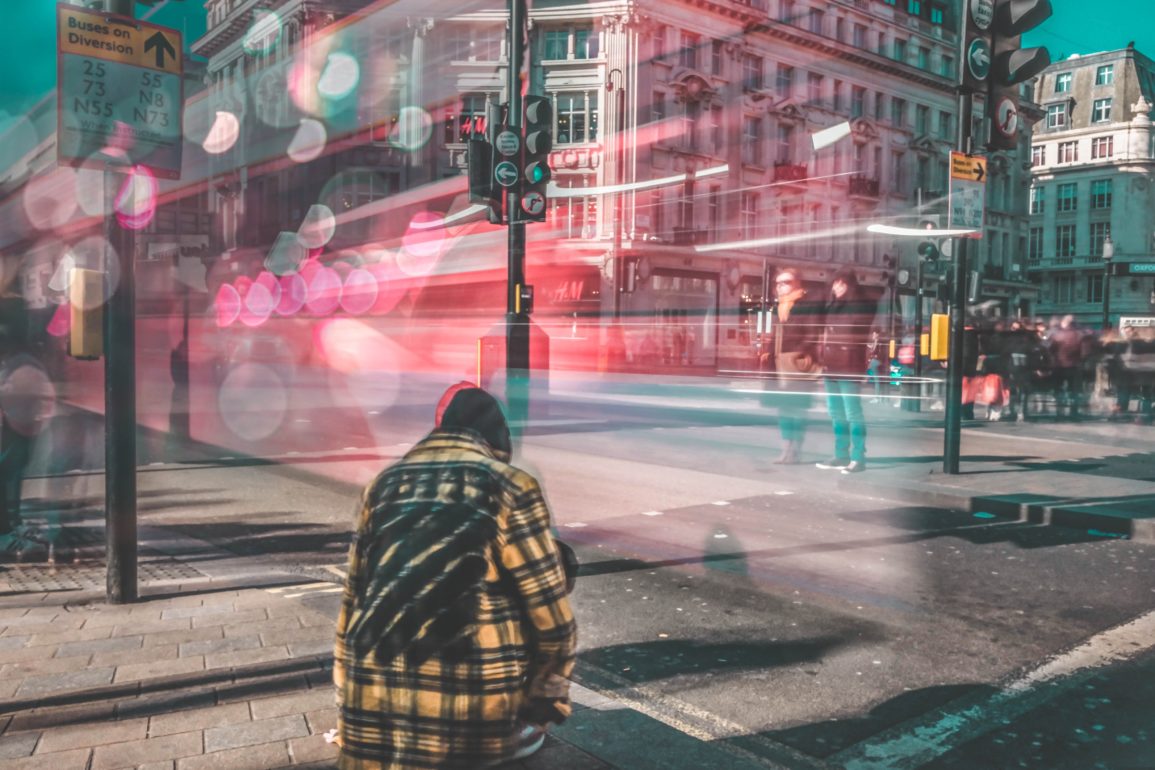 People kept talking about an interesting area.
“You’ll love it,” they said.
“So much is happening there.”

I already knew about an interesting area nearby
Filled with Hasidic Jews
From a community I’d spent little time with
But had read about
And wondered about.

I found the place with Hasidic Jews really fast.
I know a Hasidic Jew when I see one
Usually, anyhow.
I was amazed at how friendly they were
Considering all I had heard.
“Would you say that this is the heart of the Hasidic area?”
I asked a woman on the sidewalk
Slender, youngish, and kind of stylish in her way
Covered up and yet, somehow, not smothered.
She strolled around in her long blue skirt with the easy spring
Of someone who enjoys what she’s wearing
And the thought of her destination.

The woman stopped and thought
While scanning my body from top to bottom.
“I’ve written about Hasidim,” I told her
Thinking that might help her trust me
Despite my pants with red and black palm trees
And short-sleeve T shirt with a big smiling sun
But realizing that this plan could backfire hard.

“Oh!” she said, settling her eyes on mine.
“If I had time to sit and talk, I would.
People like you interest me a lot.”
She sent me to a nearby corner
And said that was pretty much the heart of things.
I headed over.
My toe started rubbing against my sandals
Causing it to burn.
I figured the day would be shot from then on
But a Hasidic pharmacist in a local store was perfect
Leading me to an ointment that soothed my toe
Showing me how to put it on
And saying, as he clasped his hands together
“I hope you feel better really soon.”
I loved that I’d had a friendly encounter with a man from here
Even though it centered around my painful toe.

I bought a little pastry at a nearby bakery and wow, was that tasty
In a simple but dazzling way.
It was filled with cheese, like a blintz
Slightly sweet, slightly rich
Just enough of everything to be splendid
And not too much.
The woman who sold it to me grinned and said, “Enjoy!”
Despite my funny pants
And even despite the energy I projected
No children in tow or husband by my side.

I walked, watching mothers wheeling strollers
And elementary school kids stepping off of buses
Heading in packs towards their homes.
They gave me a happy feeling
And that’s worth a whole lot
Though of course my impression
Could have been deceiving.
All we can do as we try to understand this world
Is move through it all
See what we see
Feel what we feel
And then, later, examine
Taking it all into the wide sweep of our minds.
Clearly an afternoon stroll can only tell so much
But I was glad that my radar sensed goodness
For whatever that might mean.

Last time I was there
Maybe 10 years before
People had scowled at me
Frowned when I bought a knish
Even though, that time, I wore a skirt
And tried, just a little, to blend in.

I thought I saw mutual respect
And maybe even something slightly more than respect.
“That looks gooood”
A nonbinary type with two small earrings, long reddish hair, a black flowing skirt
Strong, muscular arms and legs that seemed to match the resonant, masculine voice
And mustache
Said as they examined the bagels and spreads in a tiny bakery.
The woman behind the counter smiled.
Really, she smiled.
“Let me know if you’d like anything,” she said.
And I mean, of course this was business and not friendship
And yet, I’m telling you, 10 years ago
People in the bakeries here were not thrilled about
Me and my perfectly good cash
Small, nonthreatening me
Clearly a woman
In a skirt, no less
Though maybe they could tell by my awkward walk
That this was a once-in-a-decade clothing choice for me.

I loved what I saw in the Hasidic area
The shifts I perceived, the friendliness
But eventually I was ready to move on.

I spotted a genial-looking, young Hasidic woman
Walking alone
And figured I’d ask for help
But then I was embarrassed
Since I wasn’t quite sure how to describe what I was looking for.

“I hear there’s an… interesting area around here. Do you know where it is?”
I felt absurd. I should have researched this so I’d know what to say.
She was so nice. “Do you have the name of a street?”
“Actually, I don’t.”
I looked at her.
Covered hair, long skirt
But very open face.
“This might sound silly to you
But I hear there’s a… hipster area around here.
I think that’s pretty much what I’m looking for.
Stores, restaurants, bars, cafés.
Lively area.
Do you know what I mean?”

“I think I do,” she said immediately.
“I think you mean the norths.”
“Norths, like the plural of north?” I asked.
“Yes, that sounds right.”
I felt ridiculous. I felt so ridiculous.
But I really wanted to find that interesting area.
She told me to walk straight up one street that she pointed to.
“You can’t miss it,” she said.
But of course I did.
I walked and walked for at least an hour
Until the street that supposedly led to the interesting area stopped.

I looked around. Could I have missed it?
I had passed a shop or two
A bar where a few people sipped mugs of tan, frothy beer.
Was that the interesting area?
Had I become so jaded that interesting areas
No longer interested me?

I noticed a large building with a playground in back
Where Hasidic kids jumped around
And a few non-Hasidim too
Like the brown-skinned, curly-haired boy
Gliding around on a bright red scooter.

And then, close by, I found a chic-looking little hotel.
Behind the hotel’s desk was a Hasidic man
Maybe 45
Kind of classy, with smooth, polished shoes
A carefully groomed beard
And a thin sliver of a watch.

“Supposedly there’s an interesting area around here,” I said.
“Like a hipster area. Not sure if you know what I mean.”
“Oh yes, you mean the norths,” he said.
Or at least I think that’s what he said.
My brain was starting to go numb.
He took out a map, drew a line, and told me to follow it.
“This is where we are,” he said, tracing the line with his finger.
“And this is where you will go.”
He drew a dot to mark where we were
And another one to mark where I was headed.

Every once in a while, I can half focus on a map
But that state was long gone for me today.
I was tired and nervous.
I was too fed up with walking and walking
Seeking and not finding.

So I did what I do best in these situations
And found a sweet-looking woman
Yet another Hasid
And asked if she could read the map and tell me what to do.
I was beyond feeling ridiculous; I just wanted to find that interesting area.
“I’d walk you there, but I’m meeting my mother in just a few minutes,” she said.
“Just walk along the water, straight, straight, straight, and you’ll come to it.”

She pointed towards the water.
“That water over there? The water that we’re both pointing at?
I should just walk straight in the direction that I’m pointing right now?”
I didn’t even care about sounding like a moron
No, not one bit.
I was going to find that interesting area, even if it wasn’t remotely interesting.

She nodded, smiled, and said
“Good luck. You’ll definitely find it.”
I walked along the water
And that was kind of interesting!
Groups of people hung out nearby
Not Hasidim
Young families with children
Friends in their twenties sharing sandwiches and pizza
A group doing yoga
Another group playing volleyball.
I mean, it didn’t rock my world or even my neighborhood
But it was engaging. It was fun to watch.

Maybe 20 minutes later, I was pretty sure I had found it.
The area I’d heard about, that is.
The interesting one.
There was a bookstore
A guy who sold hand-decorated T-shirts with Brooklyn themes
Several ethnic restaurants:
Thai, poke, Mexican, Italian, Chinese, Japanese, Korean
A sleek-looking art gallery where I wandered in
And was told, nicely but firmly
By a slickly dressed soul
That this was a private event.
“I don’t belong anywhere
But maybe, if I had to pick
I belong more with the Hasidim than here,” I said to myself.
And for some reason, I laughed and laughed.

It was dark by now.
On this Thursday night
Many hung out on the street.
Food trucks dotted the area
Selling ice cream, sushi burritos, and crepes.
I tried a burrito with hamachi, salmon, mango, and tobiko.
It was tasty, but I’d eaten very similar treats back in Boston.
It was small “i” interesting, but probably not large “I” intriguing.

I’d seen bookstores like this one too
Their display tables featuring similar works
By young writers with “interesting” backgrounds and histories.
The people on the street were friendly but not earthshattering.
I spotted a real estate office, of all places
And prices for condos in the heart of the interesting area were super high
No cheaper than Manhattan, really
So I saw no point in living there
When the streets weren’t on a grid like Manhattan
And I’d spend many hours each week trying to find the interesting area
My feet grinding away
Every time I left it for… something else that was interesting in a different way.

I pride myself that I can find adventure anywhere.
A mall in NJ can turn into a glorious sociological journey
Or, for that matter, the subway between home and work.
The poor interesting area:
Probably, it didn’t stand a chance.
One day, I’ll return
Remembering that I didn’t find it so interesting.
On that day, I can almost promise
That I’ll be ready to prove myself wrong.
I’ll argue with anyone
Including and especially myself.
It’s the only way I’ve found
To think largely
And grow my mind with ease.