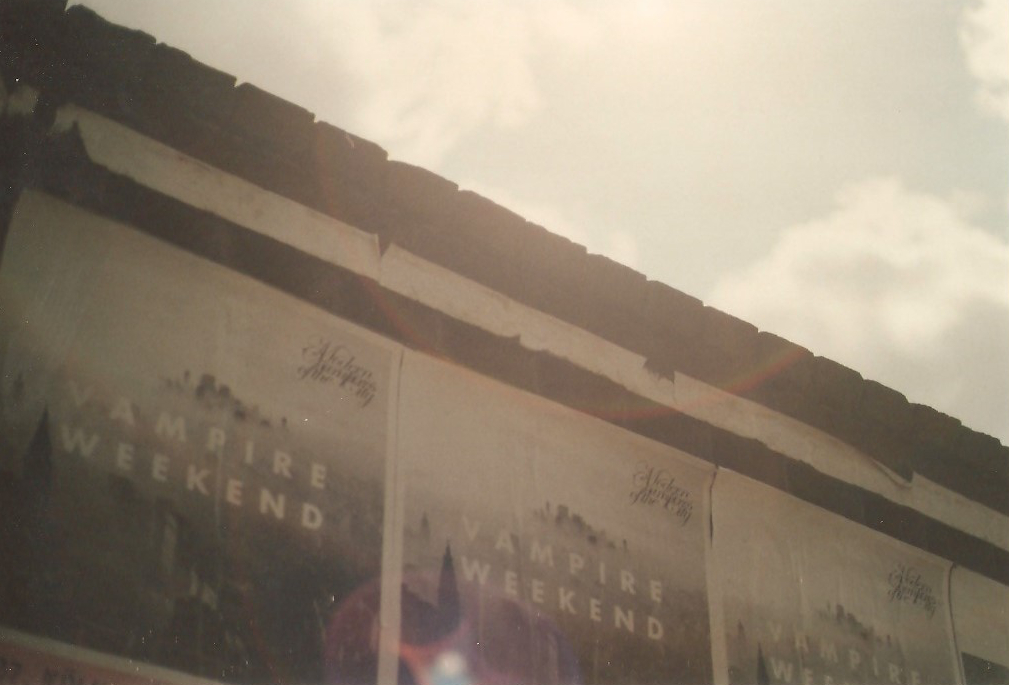 Sympathy For The Deity

This ain’t no single, this is a concept album. Let’s call this track two, continued from “What the F*** Is Jewish Music?” (and yet most people will probably just treat this as a B-side).

A fascinating analysis came out recently from Mic.com on the subject of how people listen to music. The piece, titled “Science Shows There’s Only One Real Way to Listen to Music” discusses the difference between listening to digital music and that of a vinyl record. One key point it makes, beyond the scientific data on the actual audible difference in quality, is that respect is not given to music anymore. It has become a shapeless, easily digestible and discarded thing of little worth; hardly beyond something to have on in the background while we dance, work, and commute to work, dance to commute, or work to dance. Vinyl records, it is argued, force people to set aside the time and effort to truly listen (and be rewarded for this).

I don’t know whether it was the second or third time that I listened to Vampire Weekend’s “Ya Hey” that it truly clicked for me. I was listening to the album Modern Vampires of the City and my Jew-dar had already gone off a few times from casual mentions like the following spoken word section of “Finger Back”:

Sing next year in Jerusalem
You know — the one at W. 103rd and B’way?
Cause this Orthodox girl fell in love with the guy at the falafel shop
And why not?
Should she have averted her eyes and just stared at the laminated poster of the Dome of the Rock?

But “Ya Hey” is a complex, spiritual grasp at understanding the Jewish deity. My initial thought upon seeing the track title was that it must be some sort of joke on OutKast’s “Hey Ya”, itself a meaningless title that does little to allude to the emotional content the lyrics portray (and damned if that’s not a catchy tune). But something much more important lies at the heart of this song. I haven’t read the numerous critics who have written about this song, I am merely someone who has obsessively listened to it and felt the need to share my thoughts. So some of this may be new and some of it may be well covered. Despite that, let’s break it down piece by piece.

From the outset, the music stays in the consistent chugging rhythm of a nighttime train, preceded only by a haunting single high note that shifts and continues to underscore the entire song like an ethereal underwater organ. On top of that the lyrics begin to introduce a point of view that poetically echoes the poets and prophets of Judaism’s Kingdom eras. It is truly sympathy for the deity, as Zion and Babylon, two national identities representing Jewish and non-Jewish people dating back to the destruction of the First Holy Temple in Jerusalem, are identified as forsaking the love of this essential being despite its eternal care. When the lyrics continue to spotlight how “America don’t love you/ so I could never love you/ in spite of everything” we are reminded of the vacuous nature of our consumerist society and how little care is given to honest and deep spiritual pursuit as the Jewish religion can be at its best. Like so many American Jews I come from ancestors who threw off the yoke of religion for the promise of the American dream, and the song continues to paint a compassionate portrait of a G-d that many have forsaken.

The song’s pre-chorus makes allusions to darkness and glowing faces, key religious imagery for me that that conjure the moment before Bereshit when nothingness was created to create Elokim, as well as the glowing face of Moses. What it’s also saying is that even in darkness the glow of Hashem stays with us, an inherent soul connection every Jew has despite their level of observance. As a filmmaker I take the imagery of a dirty screen and broken (projector) machine that follows very personally, but it is also a brilliant way to allude to our own origins as dust of the Earth animated (hence the name Adam, which means dirt) and the way we continue to operate despite our ignorance of spiritual matters. Every once in a while we may come back around and think about something we could have done better, or a spiritual opportunity that we willfully ignored. “But I let it go”.
And now we introduce the “Ya Hey” of the title as repeated three times (three times repetition makes something strong, or a Hazakah, as we say in Hebrew). More on that in a moment.

“@WAZZUP546: @arzE Is it possible for non-Jews to practice Judaism?” sure! practice is from 4-6 pm on thurs. Bring mesh shorts & a Gatorade

Now, the lyrics here state the phrase “Ut Deo”, meaning “My G-d” as part of the chorus. This is perfectly fine, but the official lyric video chooses not to tell you what is being said at those moments. And if you listen to the song these words are garbled, potential gibberish. I for one hear something a little different. “Ya Hey” is followed by what to my Jewish ears sounds like Yud – Hey – Vav – Hey, the four Hebrew letters that make up the tetragrammaton, possibly the most essential known name of G-d. It is a name that when reconfigured can be translated as “was, is, and will be”. It is a name used in the Torah when there is no filter between the realm of the essential spirit and ours. And most importantly, it is a name that is not pronounced as written, often instead spoken of as “Adonai” or simply Ha-Shem (the name). “I am that I am” could be derived from it when adding the primary Hebrew letter, Alef. And yet for all these mystical levels the name implies, “who could ever live that way?” This is what we ask of ourselves when doubting our spiritual journey. But the song here asks it not only for the sake of ourselves but to question how G-d might put up with us after everything we do to defy religion. Why not just bring another flood and destroy us all?

When verse two rolls around the song makes allusions to Russia and Germany, the two key countries in the fate of 20th century Judaism outside of the previously mentioned America and Zion (Israel). It can become disheartening to fight the uphill battle to matter in our world (as I wrote about recently) “so why love anything?” but Ezra Koenig, the poet of these lyrics still refers to you as “good G-d” despite it all. A key shift has happened between pre-chorus one and pre-chorus two. What before was a nervous question of a single mistake “I” made, and “I” let go is now transformed into multiple mistakes that “You” let go. When we are honest with ourselves and own up to our true selves, we realize how much effect we have and how far it reaches beyond us. When we realize that all aspects of our self are contained within the “book of life”, which itself is a metaphor for a vessel to record and contain much like cameras and files are, fear approaches. Love and fear, “Ahavah” and “Yirah”, are the two elements through which we delicately balance our relationship to the creator. And we use these channels at Rosh Hashonah and Yom Kippor when we reassert our reason for existence. We live up to where we did things out of too much love, too much fear, and put on masks that obfuscated the truth.

Outside the tents, on the festival grounds
As the air began to cool, and the sun went down
My soul swooned, as I faintly heard the sound
Of you spinning “Israelites”
Into “19th Nervous Breakdown”

After another chorus, there is a breakdown both musically and emotionally. The Rolling Stones reference of “19th Nervous Breakdown”, is a song about falling apart from pretending to be something you are not, which includes the lyrics “And though you try/You just can’t hide/ Your eyes are edged with tears”. Israelite tents are a very specific imagery, as in “Mah Tovu Ohalecha Yaakov, Mishkenotecha Yisrael” – “How great are your tents Jacob, dwellings of Israel” (Numbers 24:5). The line is spoken by Bilaam, who was sent to curse the Jewish people but instead could find only praise. This is a key allusion for the transition happening in this song from a place of being without to feeling within. The context it is given in the song here could be read as a wonderfully contemporary festival grounds as in major music festival. Or it could also be a reference to the pilgrimage to Jerusalem on the three major festivals of the Jewish calendar, Sukkot, Passover and Shavuot. Those Jews would also have dwelled in their Great Tents and ecstatically welcomed the coming holiday’s beginning at sundown.

The song finishes off with another chorus that is stripped down to just the beat of the drums and the garbled voices. Another ethereal sound emerges, and with a kick we are surrounded by choral voices and percussion. The other instruments reemerge, including the garbled “Ya Hey” in the background. “Ya Hey” in Hebrew is the same two letters, Yud and Hey (Y and H), both forwards and backwards. YH-HY. We live in cycles, interrupted only when we realize that the constant repetition could be interrupted with the addition of the Vav (V), which in the shape of the letter is a Yud with an extension reaching downward. We have our ups and downs, nothing stays consistent and we try to come to terms with everything we have experienced over course of ours lives, our spiritual identity, and the creator who is outside of time and space. The song retreats to Bass, choral synths and percussion to lead us out; eerily similar to the three instruments used in Biblical Temple services.

I have always believed in the power of the album- a whole multi-faceted collection of songs that are greater than their parts. And while we only focused on one song here, I suggest you take the time to listen to the other tracks on this or any album and not reshuffle their order, skip to the ones you really like or even half-listen while other things go on. Whether you are listening to the optimal breath of sonic tapestries offered up by an artist or a heavily compressed, loudness increased radio edit, just take some time to turn off your mind, relax and float downstream.

Photos above by Girl/Afraid and Dusty Knapp.