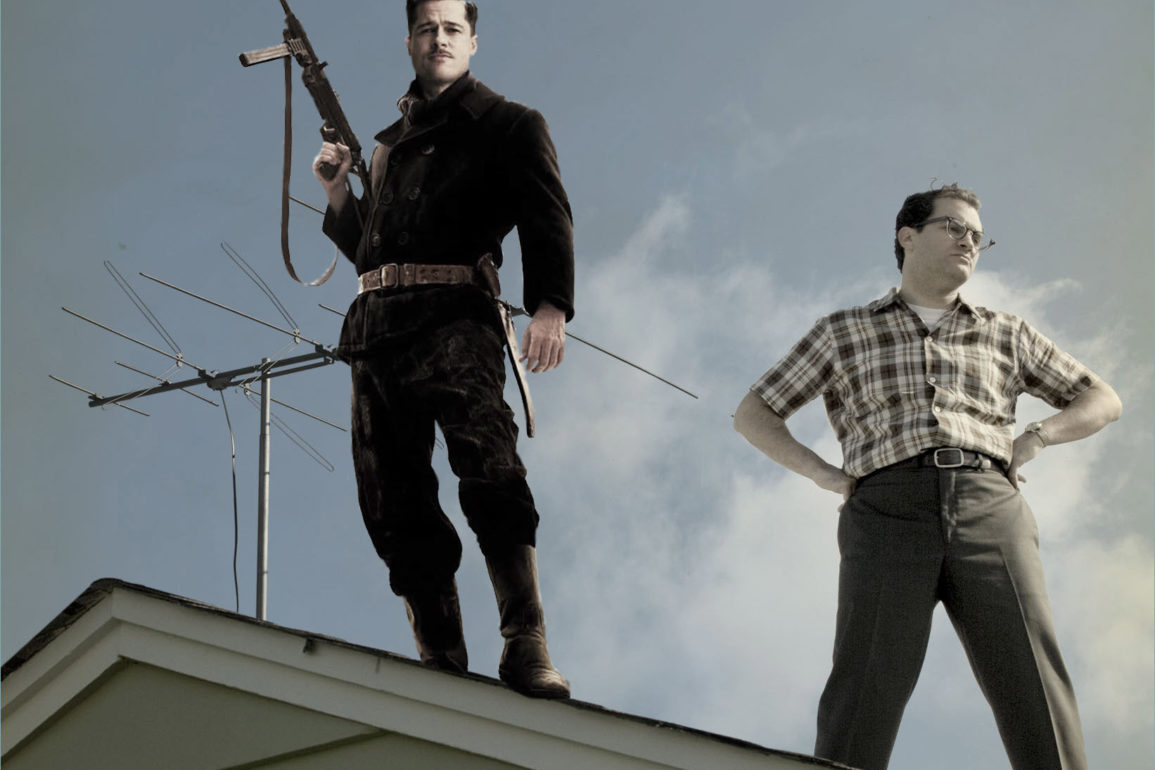 Over the next two articles, I will be comparing and contrasting a major milestone in contemporary Jewish cinema, when at the 82nd Academy Awards ceremony in March of 2010, two extremely different Jewish-content films competed for the top prize.

Change was in the air that night. The previous year, the world’s most popular film The Dark Knight was overlooked for a Best Picture nomination. This uproar caused a dramatic rewriting of the rules to expand the number of nominees from five to a maximum of ten. Films that would not normally be recognized in the category, such as the action/sci-fi District 9 or animated Up, got an unexpected boost. It also resulted in major nominations for both A Serious Man and Inglourious Basterds, films that tackle Judaism from opposite ends.

A paradigm shift happened over the last generation away from innate Jewish cultural content in films— Mel Brooks speaking Yiddish in Blazing Saddles, Woody Allen being viewed as Hassidic at the dinner table in Annie Hall; these were Jewish filmmakers reacting to the Borsht Belt world they grew up with. This was accepted because they reflected peers like Francis Ford Coppola and Martin Scorsese drawing on their Italian heritage, representative of a time when everyone was free to express themselves as post-immigrant, post-Hollywood outsiders.

But by the 1990’s, Jewish culture on film was no longer the old man making the lewd joke about his wife (though this continued on television), it was the old man is dying and we need to preserve his story of struggle for future generations. In 1993, Steven Spielberg released a film that changed the way we think about an important part of our history. That emphasized the power a few people have to change the world dramatically, and promote the greater good despite the unwarranted death that came along the way. I’m talking of course about Jurassic Park. But that’s the generation gap talking. For the over-25 crowd, Schindler’s List, which Spielberg also released in 1993, was the height of Jewish film (and may continue to be perceived this way today).

Schindler’s List, while being an extremely well made and important film, places Judaism as the backdrop and makes the protagonists the non-Jewish leaders who saved/killed the Jews. But while Spielberg was trying to honor heritage, Quentin Tarantino was trying to make Inglourious Basterds a fun movie. Spielberg shifted the narrative to strong Jewish combatants with 2005’s Munich, and Tarantino billed his revenge-fantasy in that vein. But what we got was more Schindler than Munich, because the Jewish characters are again relegated to the background.

Spoilers follow. Go see these films and come back! Also, these films are rated R, so sneak in with your parents’ permission.

A film that ostensibly was to follow a ragtag group of Jewish American soldiers as they fought their way through Nazi-occupied Europe, Basterds is instead (like most Tarantino films) an episodic structure that allows a colorful cast of characters to take the lead. Nazi Colonel Hans Landa (Christoph Waltz) makes an impressive twenty minute introduction that sets up our real Jewish hero (but more on that later), and Lt. Archie Hicox (Michael Fassbender) is an English soldier under cover as a German whose chapter occupies a further 40 minutes.

In between the two of them we get a section focused on the Basterds, led by Lt. Aldo Raine (Brad Pitt), a non-Jewish southerner who does the majority of the talking. I haven’t taken the time to count, but I’d be shocked if any of the Jewish soldiers has more than two lines in the whole movie. In fact, the ignorance of the Jewish characters is so egregious that a fair chunk of their section and by far the most extensive character introduction is dedicated to Hugo Stieglitz (Til Schweiger), a Nazi-hating German soldier they recruit for their group.

As the film wears on, it becomes more apparent that the Jewish soldiers don’t really matter. We know so little about them. These Jews were nameless numbers whose Judaism goes as far as “wouldn’t it be cool if Jews fought back in World War Two?”- precisely the thinking that makes “The Bear Jew” (Eli Roth) wielding a baseball bat the most notable among them. He could have just assume been any other ethnicity from Brooklyn. These characters are Jewish because we are told they are Jewish. There is no iconography, no speech and no action that give us any insight into them. By the end of Lt. Hicox’s chapter, half of them are dead. Revenge fantasy? More like reality. As an audience we might have been more broken up if we got to know them in the first place.

The film instead heavily invests us in the fate of Landa, Raine, and of course, Shosanna Dreyfuss (Melanie Laurent). The one Jewish character to survive a massacre in the brilliant opening scene, hers is the protagonist Tarantino, and by extension us as the audience, are most invested in (except maybe uh, the Jew-hunting Nazi). A smart, capable woman who has set herself up as a movie theater owner, she represents the Jew who survives at any cost. And more importantly, when she is given the opportunity to take out the highest ranking Nazis including Hitler himself at a film premiere (did I mention this is Tarantino’s revenge-fantasy?) she devises a brilliant plan. The sympathy we feel for her sets her apart from the other characters we meet, and the tension that arises as she is continually confronted by the Germans who surround her may be the crowning anxiety in a film full of blissful suspense. Which is why, when she surprisingly is shot and dies in slow motion right before her moment of triumph, we are robbed of any hope that remains. Shosanna is literally hit in the gut, just as we are.

From there the film’s conclusion kicks into high gear. The two remaining Jewish soldiers in the theater shoot Hitler and Goebbels point black repeatedly and cartoonishly with machine guns. Then they fire unmercilessly from the balcony at a room full of screaming Germans who can’t escape due to locked doors on one side and a flaming screen on the other. The giant swastika at the front of the room falls. We go into slow motion, watching the eyes of the Bear Jew as he fires. Hearing the whizzing of the bullets into the back of a woman who screams. Despite her death, Shosanna’s plan to burn down/blow up the theater with all Nazis inside goes off theatrically and spectacularly, and includes her booming recorded voice proclaiming “This is the face of Jewish vengeance!” Her projected face cackles on the smoke and fire, like a twisted version of the Wizard of Oz. The two Jewish soldiers die there in a suicide bombing to make sure no one gets out alive.

When I experienced this for the first time I was distraught. Did Tarantino have to bring the extremely loaded concept of suicide bombing into it? Is this really the way of Jewish vengeance? Is this what we all wish we could go back and do, if we had a time machine?

I like to think the answer to all these questions is no.

To me, Judaism is not about war. It is not about revenge, especially when that means killing people (even if they deserve repercussions for their actions). And it should not be given lip service by whatever wish fulfillment Quentin Tarantino thinks we need. That’s not to say this is a bad film- far from it- it should be noted that Inglourious Basterds is an amazing film. It’s a well-crafted ride that you go into hating Nazis and rooting for the good guy, and are meant to leave feeling much the same (I’ve said before that the film’s closing words “this may be my masterpiece” as spoken by Brad Pitt may as well be Tarantino himself speaking). But what worries me is that the message we are left with is a hollow one, which maybe a lot of people feel when discussing the Holocaust. The film closes with exactly three people left alive- our hero (Brad Pitt), our villain (Christoph Waltz) and one Jew. And I guess more than anything else this sums up what the film has to say about Judaism. Heroes, villains, and a small percentage of us continue to survive. Why? To live on and defy our oppressors or be helped by our saviors. Not for glory, not for G0d, just pure existence.

I for one want more from my religion.

Come back soon for part two when we will bring A Serious Man into the discussion and everything gets really… weird.