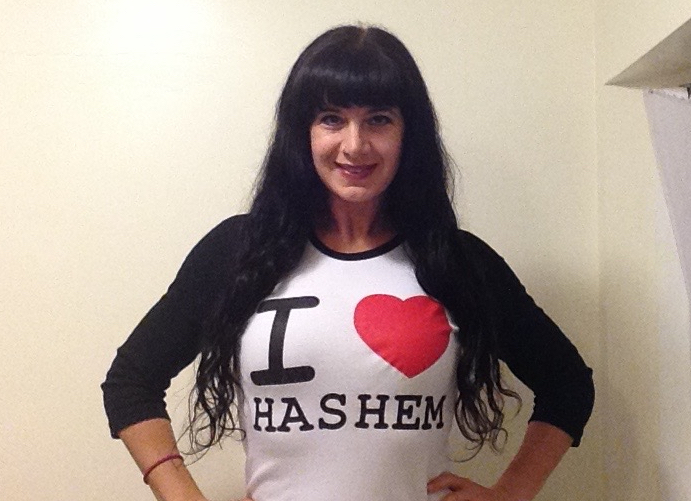 Turned Off… And Turned On… By G-d

This is the piece I was assigned for the “Readers Take Over Hevria” Project that is currently underway.

My assignment? To cover the topic, “Why don’t we talk about Gd enough?” as suggested by Bonni.

Here is the exact wording of the suggestion, straight from the mouth (or should I say, keyboard,) of Bonni:

I want someone to talk about why we don’t talk about Gd enough, why no one is talking about being on fire with love for Him, and then I want them to do just that. I want some wild abandon, logic-be-damned, straight-up love-letter-to-Hashem type stuff to drown in for a bit because I am so thirsty. And because I usually depend on Elad’s and Chaya Lester’s words to give me that glorious fix, I nominate one of them to do it. : )

So Bonni, Elad gave the assignment to me, rather than to himself or Chaya Lester, as you can see. I hope you won’t be disappointed to read my words on the topic, rather than theirs.

I am grateful for the opportunity “to talk about why we don’t talk about Gd enough, why no one is talking about being on fire with love for Him,” and then write a “wild abandon, logic-be-damned, straight-up love-letter-to-Hashem” on your behalf. And it also scares me. Which is awesome.

Why Don’t We Talk About G-d Enough?

I’m a lifer. I’m in it for the long haul. I am wild on fire about, crazy for, stone-in-love with G-d. I can’t remember ever not believing in G-d. My belief in—and relationship with—G-d are integral to my being. I am one of those mystical types who have never been able to be sold a bill of goods that this material existence; that this tangible reality is all there is. It just never made sense to me.

It’s almost a problem, in that I am unable to do certain things that even believers are meant to do. Like get mad at G-d. I can’t do it. I don’t really rail against G-d when things don’t go the way I would like them to. I’m told that it’s healthy to do so, and I can totally see that. But it’s not how I operate usually. Rather, I tend to blame myself, to think I am out of alignment somewhere. That I am just not seeing the big picture, just not seeing how everything is actually unfolding precisely as it should.

This is despite feeling a great amount of discomfort (that’s putting it mildly) about my life. This is all when it comes to how we are “supposed” to be, according to the world at large. I don’t fit the mold very well. Pretty much nothing about my life is how it “should” be. And it makes me feel real bad sometimes. I often feel unsafe. I feel very lonely. I feel very broke and very broken.

I don’t feel like I am very good at being a human, let alone a grownup, according to the status quo and societal standards. I can’t even really look at my life head-on without being overtaken by a wave of despair.

But everything else…everything else, not so much. I feel like I get an F minus at life. But it never translates into me feeling like I got a raw deal from G-d. I just don’t operate that way. I am overwhelmed with gratitude for all the blessings I have been given. I am moved to tears when I think of the gratitude.

But is that a valid reason to believe in G-d?

I mean, if I said, “The tooth fairy is all I’ve got,” that wouldn’t make the tooth fairy real. And according to atheists, there is no difference between these assertions.

So why is talking about G-d such a turn-off? Even to someone like me? (And it really, really is…)

I was raised by self-professed atheists. I say “self-professed” because I have yet to talk to an atheist who wasn’t actually agnostic. In my experience, if I talk to even the most extreme atheist long enough, they always eventually cop to being agnostic, whether they like it or not. Whether they would express it as such or not.

I was lucky to be raised by “atheists.” It gave me lots of healthy skepticism and distrust of organized religion in general. It gave me pause. It gave me respect for science, which I freaking love. It balanced me.

And this brings us to the heart of part one of your topic, Bonni: why we don’t talk about G-d enough.

In most ways, I relate more to “atheists” than believers. Here I am, a flaming believer with the mind and aesthetic and intellect of an “atheist.” So when G-d comes up in casual conversation, (or in a political debate, or in an awards speech,) I can feel myself shutting down to the person. I can feel myself going, “Oh, they’re one of them,” internally. Me! A believer! I am judging this other person for believing in G-d. For bringing G-d up in a non-sacred setting, when the truth is, everything is sacred.

I feel myself judging these people. Sometimes questioning their intellectual capacity.

This isn’t so easy to admit. It’s shameful. We all have our stuff to work on. This is some of mine.

It’s not all believers who are turn-offs, it’s those “believers” who seem to think that they are deserving of preferential treatment from G-d who are such freaking turn-offs. Those who push their agenda, or steal land, or kill people because “G-d said…” Because “G-d is on their side,” so they get all the metaphorical candy.

Like there is some old white guy sitting on a cloud somewhere tossing lightning bolts at the people he wants to punish.

I don’t want to be lumped in with believers such as this. So I just bite my tongue.

This is not G-d as I understand G-d. I don’t experience G-d as some personified anthropomorphized Caucasian with a long beard.

I am a Jew, and a mystic, and a panentheist. Not pantheist, panentheist. Meaning, everything exists within G-d.

Let’s be honest: being a poet gives me permission to speak in symbols and metaphor. I get to writhe in the divine and people just sort of accept that as my “poetic nature.”

Let’s continue to be honest: all my poems are love-letters to Hashem.

So maybe that’s why I was given this assignment, Bonni, and I hope to do right by you, and take you to the depths. Thank you for the inspiration.

Oh G-d,
This desert of earthly existence
Has me blistering under the harsh sun,
Cracked to bleeding.
You are the fluid relief I dream of.

Oh G-d,
Pluck me from this troubled aridity.
Plunge me in the pool of your cool infinity.
Let me swim in your limitlessness,
Let your liquidity penetrate my flesh.

Oh G-d,
Immerse every inch of me,
Submerge me in your divinity.
You heal me, making supple
What was brittle.

Oh G-d,
You lay me down in tranquility,
And lift me up in ecstasy,
Your essence parts my parched lips,
Quenching my consuming thirst with your kiss.

Oh G-d,
I am drowning in gladness,
Surrounded by oceanic bliss,
Submerged in your glory,
There is no more than this,

Oh G-d,
This is the reason for my endurance.
This is the all-consuming
Eternity I yearn for perpetually
Oh G-d, I am yours, take me.

The premier West Coast Hevria event is coming! Wednesday, January 27th, 2016, at 7:30 p.m., I will be performing with Darshan Project at Pico Shul in Los Angeles. Please join us for a night of music, poetry, and happy fun times. Find all the details here.