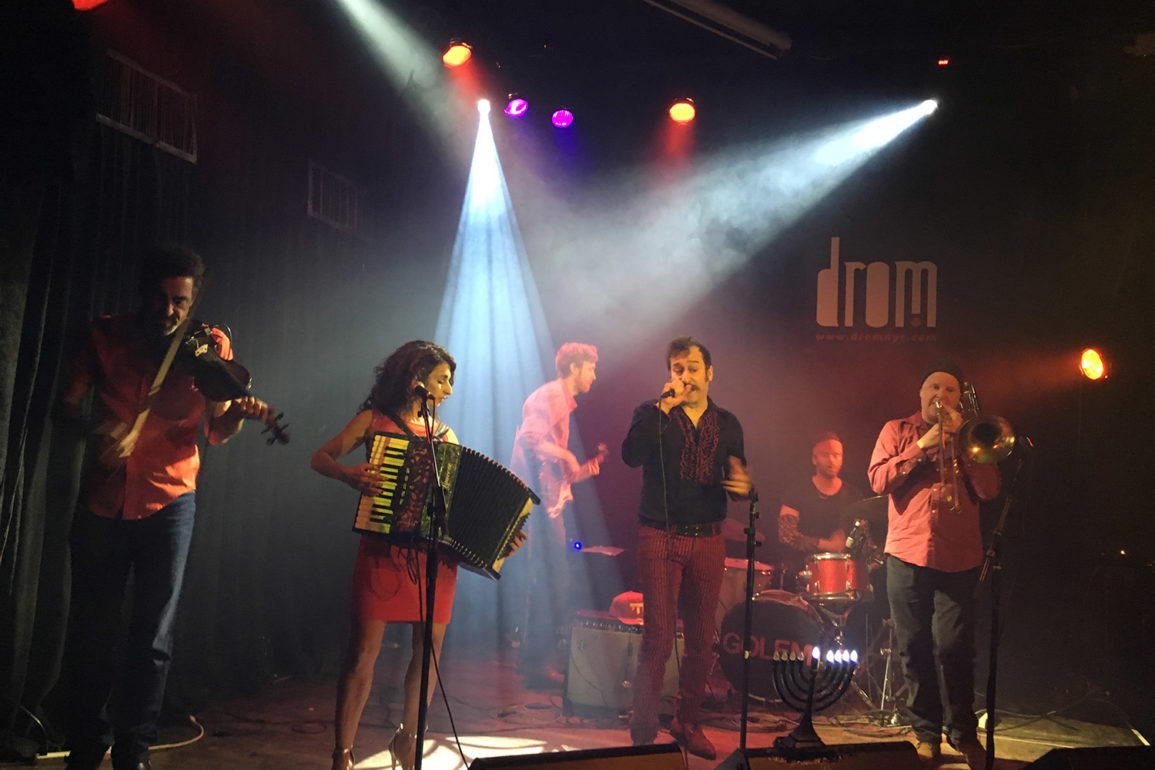 Why I Keep Going To See Golem Perform

On December 5, the fourth night of Hanukkah, Golem headlined a Hanukkah concert on New York’s Lower East Side. It was not my first time seeing this klezmer-rock band with a punk edge. Rather, it was my 26th. Over the last dozen years, I’ve schlepped far and wide to see them. They even played my wedding last year! I’ve featured them in two books, Oy Oy Oy Gevalt! Jews and Punk and the brand-new Punk Rock Hora: Adventures in Jew-Punk Land. I can’t get enough, and there’s more to it than liking the music.

At this year’s Hanukkah show, Golem opened with their “anthem,” “Odessa.” A spirited hora broke out during “Mazel.” Of course they played “Freydele,” which is about a meydele named Freydele who plays with a dreydele (dreidel). They had the “world premiere” of a Hanukkah song discussing miracles and eight days.

For the encore, Golem played the classic Yiddish song “Rumenye.” Singer Aaron Diskin always includes a manic rant in the middle of the song, where the first half ends with the word “minor” and the second half ends with “major.” In honor of Hanukkah, Diskin screamed about how darkness made him feel minor. Then he noticed “little Hanukkah candles”—there was a menorah on a monitor—that mesmerized him. He said they were destructive, as if they wanted to consume the whole world. The flames made him feel major!

This was my sixth time seeing Golem at a Hanukkah/December show. The compulsion to keep going dates back to my very first time. It was the night before the first night of Hanukkah in 2006, and I was in San Francisco covering an unrelated Hanukkah punk tour. Golem played at Latka Vodka: Festival of Rights, which featured latkes, vodka, and activists from eight social justice causes lighting a menorah onstage.

Golem’s set was fun and full of energy, but it was their hora medley that hooked me. Two or three women called the “Hanukkah Horas” started a hora. About half the audience enthusiastically joined hands, kicked their feet, and circled around a mid-sized concert venue. After singing the correct lyrics of “Hava Nagila,” Aaron frantically sang about wanting to have a (hava) tequila. He rolled around onstage in “A Great Miracle Happened Here” underwear, which Golem’s violinist and drummer also modeled.

As I danced around the club hand in hand with presumably Jewish strangers, I had a euphoric high. I felt Jewishly connected like never before. The hora had been a familiar dance since childhood, but this was a punk rock hora. This was fun Jewish culture mixed with debauchery. This was what was missing in my life!

Not all the December shows I’ve attended were for Hanukkah per se. In 2015, latkes were served at a Hanukkah concert on the Upper East Side. In 2006, Golem played a “Jewltide” concert the night before Christmas Eve in Washington, D.C. In 2014, they performed at a holiday season concert in Brooklyn.

That wasn’t even the most absurd example of Golem being the token Jewish band that month. Golem played at the Lincoln Plaza Christmas tree lighting. The event was so packed when I arrived that I finagled a press pass so I could go up-front. After the tree was lit and as the rain kept coming down, the crowd thinned out. The weather didn’t stop me and a handful of concertgoers from dancing the hora in front of the stage. Aaron took advantage of the juxtaposition of a Jewish band and a newly lit Christmas tree. He quipped that, in line with his understanding of Christmas tradition, “We will eat the tree!”

Sometimes Golem rock out full-throttle. Sometimes I get to dance the hora with wild abandon. Sometimes Aaron rants like a madman, strips down to his underwear, or vows to eat a Christmas tree. Sometimes I travel three hours or 3,000 miles, but for the last decade I’ve been fortunate to live in New York City, which is also Golem’s hometown.

This is the Jewish culture I cherish. As with other Jewish punk bands, Golem draw on familiar references as an entry point. But they go much further, updating them and making them relatable for a new generation that doesn’t speak much Yiddish. There’s a lively spirit, an edgy approach, and an offbeat sense of humor. Considering that I’ve seen them live far more than any other band, Golem concerts are my best ticket to feel reassured in my Jewish identity.