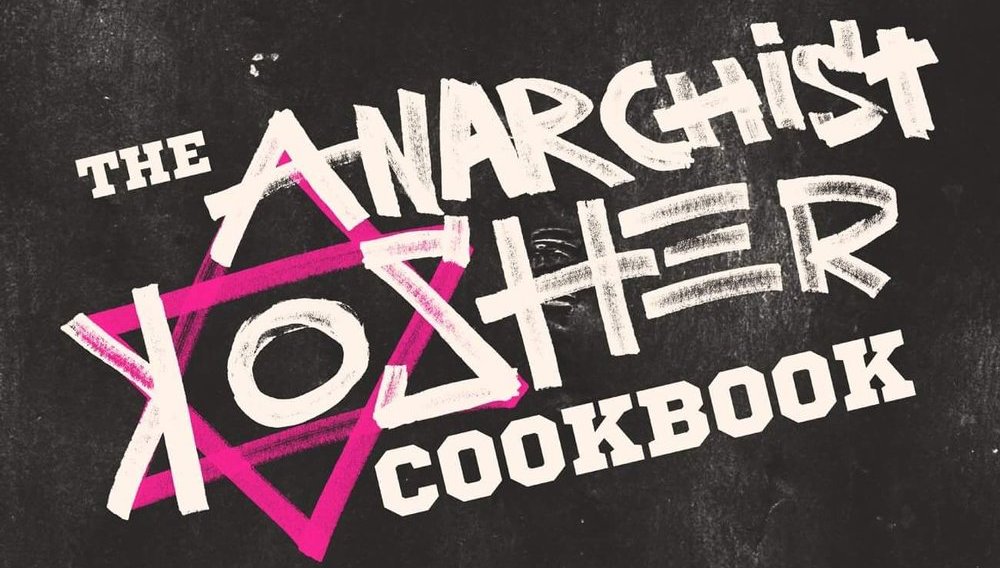 Cooking with the Anarchist Kosher Cookbook

Like the allusory joke of its title, Maxwell Bauman’s collection of short stories The Anarchist Kosher Cookbook

has a very limited audience—a niche within a niche, that limited number of beautiful people who will have at least a passing familiarity with both The Anarchist Cookbook, the perpetually-Xeroxed manual of homemade explosive devices for domestic uprisings, and the sub-genre of cookbooks that do not merely contain kosher recipes, and certainly bear only the most passing resemblance to the miniature culinary museums-on-paper put out by Yotam Ottolenghi and his ilk, but echo more the haimishe delights and misspellings of Spice & Spirit and The Molly Goldberg Cookbook and The Famous Jewish Cookbook — that is, those garishly-printed 1970s volumes that regard jello as an all-purpose ingredient and expound on the myriad ways that tuna fish can be turned into salad.

In other words: Maxwell Bauman, don’t expect this book to become the next Da Vinci Code.

But a few weeks ago, the comedian Moshe Kasher posted a tweet that was just as niche: “Martin Buber’s personal pronouns are I/Thou,” summoning the intersection of those at the forefront of the evolution of nonbinary queer grammar and post-WWII Jewish theological philosophy, and I watched in pleased surprise as the numbers of hearts and retweets circulated higher and higher. Maybe there’s still few enough of us weird Jews to warrant a manifesto, but there’s also enough to cling to these tiny sporadic appearances in the overlap of people who are really into Judaism and really into oddness — enough, at least, to deserve a book like The Anarchist Kosher Cookbook, and to will Maxwell Bauman into existence.

I’m going to reprint the book’s table of contents here, partly just so you can appreciate it:

Partly, it’s that his combination of deviously clever puns and intermixing lingos — Baphomitzvah, for example (and if you didn’t know), portmanteaus the demonic celestial Baphomet with the time-honored Jewish ritual of Bar Mitzvahs, or, in the case of this story, a b’nai mitzvah. As we see the first sparkle of the demonic creature’s existence, the repeated snubbings and the heightening impending revenge of the titular bas mitzvah girl, we see both tropes of stories rearing their heads: the ugly-girl horror-story narrative, in which our likeable but socially-spurned antiheroine comes into contact with satanic powers, claims them for her own, then wreaks a mirrored havoc on the community and town who have wreaked a similar sort of havoc on her. To put this on top of the modern secular bar mitzvah narrative isn’t subversive, it just makes sense — but it works, and it works so joyously well.

That’s a lot of the joy of The Anarchist Kosher Cookbook. Substituting a golem for homemade molotov cocktails in the title story is a no-brainer, but the story’s power comes from the effortlessness of the twin narratives. Yes, Emma Goldman and Abbie Hoffman were Jewish and pillars of countercultural uprisings, but much of their personal journeys lay in ignoring or minimizing their background and/or affiliation. In the title story, he embraces it. The language of revolution is weaponized not by youngsters and upstarts and in spite of their Judaism, but by elderly rabbis and bubbes, and because of it — and by those youngsters and upstarts who claim that tradition.

The mixing occasionally has mixed results. I first encountered this book at an indie-books conference held in one of those sports arena-size conference halls with a million aisles and people swarming them like an ant farm. If you know anything about me, you can picture our first encounter: me catching sight of the cover typography, then actually reading the title, eyes popping out of head, body popping out of skin, &tc. To paraphrase Moshe Kasher’s tweet, I was pretty sure the audience for the title was me.

I read the first page of the first story, “When the Bush Burns,” and I was in weird Jewish heaven. Forgive me (and, by extension, Maxwell), but it’s raunchy.

I curled up and pulled the covers over my head, but the light was much stronger under the sheets. I opened my eyes to discover bright orange flames flickering out the edges of my panties.

I screamed and kicked off the sheets.

“What’s wrong?” my husband called from the kitchen.

“I’ll get you some cranberry juice,” he said.

It works on so many levels, right? Geez, I was into this. But the story devolves into — minor spoilers in this paragraph — the couple’s inability to conceive, and the work of a G-dly miracle/satanic imp/odd vaginal trickster to get her to hook up with the sketchy, overly willing rabbi of their synagogue. The story felt like it started promising Talmudic deconstruction and ended as a MAD magazine take on what a page of Talmud would look like, but without the sly evenhanded irony of a MAD article. At a few other places in the collection, Bauman makes a few errors/assumptions/missteps with regards to historical or cultural accuracy, especially when dipping into his Hasidic caricatures, which at other times in my life I’d get annoyed at or offended by — but this collection is meant to offend, good-naturedly, and for the annoyance part, I’ll just say that nothing’s too egregious, and probably could have used a little more research/asking questions, but it all really does seem to be coming from a good place.

And then there’s “The Leviathan Blues.” This story. I could write an entire other essay about this story, and how much I loved it, and how much it disturbed me — not about the character of G-d in the story, but about our entire notion of G-d as an almighty arbiter of our lives, as a storyteller in the most evil and poetic way, as Someone who’s looking out for everyone in the world, and because of this makes some decisions that are, at best, direly sad.

I don’t want to give too much of it away, but you know the story of the Leviathan, right? When G-d created the world, G-d made the Leviathan, a sea monster bigger than all other animals, and soon realized that they would fill up the sea and the Earth and there would be no room for other creatures. So G-d had to uncreate it. Anyway, this story takes that particular story and expands it, and it really does bear the fruit of a bit of research, or of digging into the several stories on this aggadic cryptozoid, but the story’s most successful technique, I think, is its simple way lingering on every moment, filling it with detail and thought.

It still has Bauman’s irreverence and his humor, it still has that cruelty and irony, but it fills the pages with the Leviathan’s pain and rage the way the Leviathan fills the sea. It’s graceful, it’s tragic, and it makes all of us who aren’t majestic, lonely sea monsters see a little more just how big, and how small, the world can be.