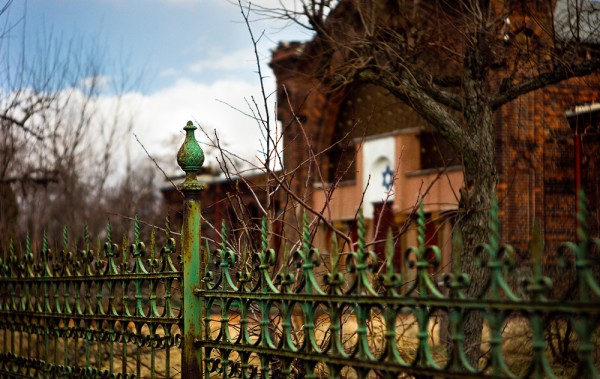 The Gates Of The Synagogue

The gates in front of the synagogue were locked on the day I was born.
Black metal fencing enclosed the small grey building with Hebrew letters
and a star of David carved in the cement above the closed wooden doors.
Gates pulled together by thick chains, a metal padlock holding them tight.

My grandmother, all five feet of her, banged on those gates,
pushing, pulling, slamming them between the chains,
clanging and rattling them, demanding entry.
“I’ll go to a church of you don’t let me in!” she threatened.
Churches weren’t locked in America.

There was too much blood on the day I was born.
An invitation, an opportunity for an untimely death.
Racing ahead of the angel of death, fear for her daughter
propelled my grandmother to those gates.

The bearded men, safe inside the synagogue, hearing the clatter
rushed from their books, prayer shawls flying, to open the gates.
Surrounding the Torah, they prayed on grandmother’s behalf.
They prayed for her as men will do, following rules and rituals
in proper order and sequence to change my mother’s name.
Renaming her so the angel of death wouldn’t know her.
Confused, that evil entity went off in some other direction.

There was too much blood on the day I was born when
the gates of the synagogue were locked in America.

Not so today in America where they think the times have changed.
The gates stand wide, open for entry, for congregation, for all.
Yet blood spills red and hot. It flows from church, from synagogue, from mosque.
Death comes now, it isn’t fooled, when hate is leading the way.