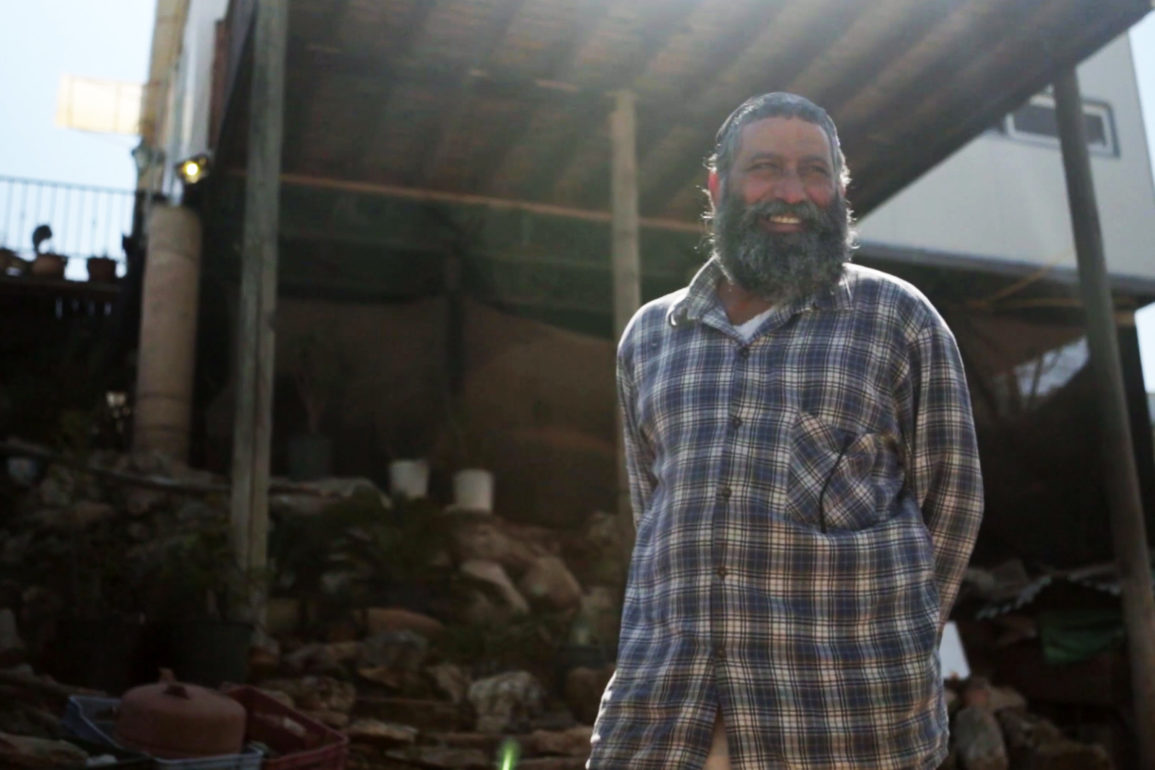 Meet Amnon, an artist, farmer, winemaker, and baal teshuva Israeli who now lives in Bat Ayin Bet.  Bat Ayin Bet, unlike the main town of Bat Ayin, is not recognized by the Israeli government as a legal town.  Amnon lives on the very edge of Bat Ayin Bet, in a home he built himself, with his family.

It is for this reason that we chose to call this episode, “The Settler.”  The discussion around anything that depicts the towns outside of the ‘67 boundaries of Israel tend to be polarizing from the moment they begin because the debate around the very language of that discussion makes discussion impossible: those who believe the towns should are legitimate refuse to call them settlements.  Those who don’t believe the towns are legitimate demand they be called settlements.  And so discussions can become impossible.

That is why we have focused on the name of the town for our series, and on the people who live in it.  We want people to enter the human dimension before debating.  And it is also why we decided to give this one its title: to not avoid the debate through entering the human dimension, but to spark it.  Amnon knows that he is pushing the boundaries of what is acceptable to the Jewish state, and it is something he embraces.

And while the focus of the video is primarily on how Amnon arrived at his destination, and his personal view of the world, this is also the first video where the “settlement” issue is handled directly by one of our subjects.  It is in this spirit that the “Bat Ayin” series was created: that of truly entering the lives of our subjects, by understanding that the setting of their lives does not define them, but does affect everything they see, touch, and experience.

Watch Episode 1 here and Episode 2 here if you missed them.

Find out about our fourth installment by subscribing to our channel on YouTube, and see bonus footage by following us on Facebook.

The town of Bat Ayin lies in the hills between Jerusalem and Hebron. The population is estimated to be 85% baal teshuva, Jews who weren’t born Orthodox but chose that way of life. Many of the residents are artists, farmers, and/or scholars. All of them share a sense of mission: this is their land, and their vision is essential to the future of the Jewish people.

Our goal with this film series is to show a community of Jews that doesn’t get a lot of exposure beyond the political. The residents of Bat Ayin challenge many assumptions – about what it means to be Jewish, to settle in Israel, and to inhabit, physically and spiritually, the tension between worlds. In a discussion that is often divisive, we want to show you a human, living, breathing side of this one-of-a-kind place.

A note on our release schedule:

Although we originally had planned to release these on a monthly basis, we’ve come to realize that each one of these pieces requires much more work than originally expected.  And with our limited funds, this means we can’t hurry their release, but instead take the time to get them out.  Right now, that most likely means they’ll be coming out every 2 months or so.

If you’re interested in helping us get them out quicker (through resources or funding), feel free to contact us.