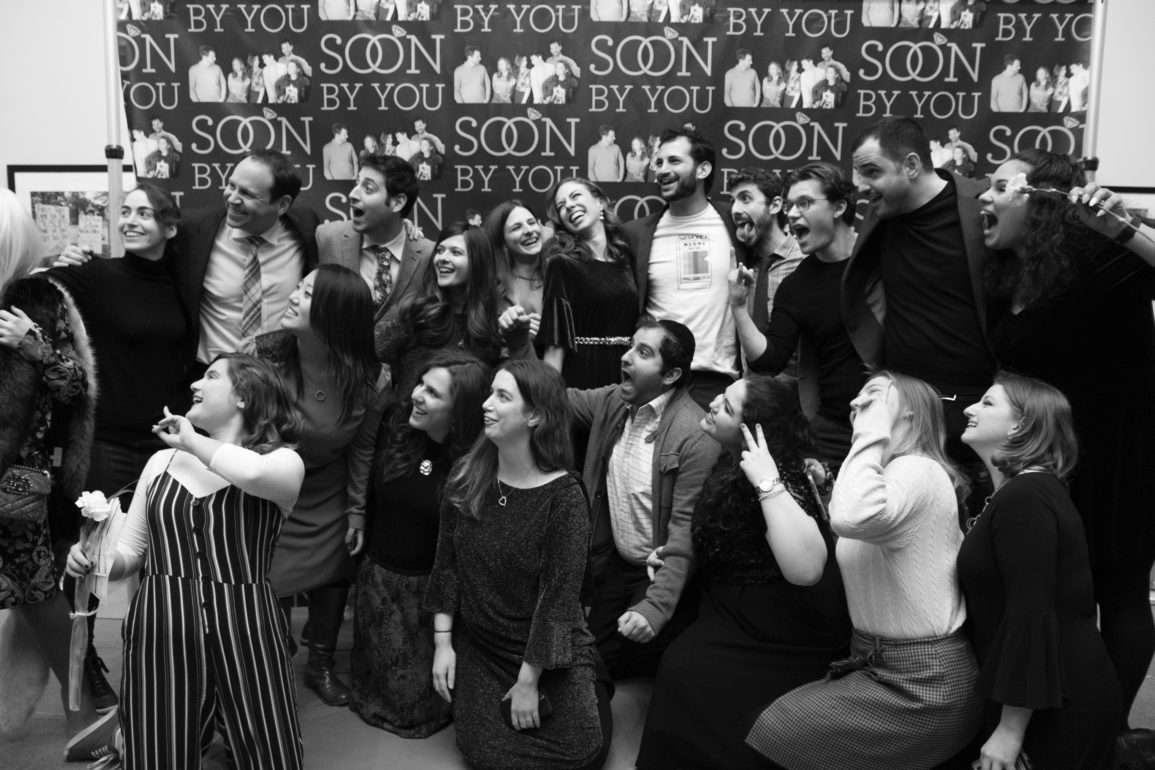 Why “Soon By You” Is All Too True

“Soon By You,” the comedy web series that follows the lives of six Modern Orthodox Jews living in Manhattan, debuted the first episode of its second season this past Sunday at the Marlene Meyerson JCC. The choice of location made the viewing a fully immersive experience as a great deal of the episode was filmed there. The episode picked up right where the story left off as it led fans deeper into Sarah Feldman and David’s blooming relationship, Z’s quirky antics, and the complicated narrative between Ben and Sarah Jacobs. Over the course of the first season, the characters developed rapport, secrets, wants, and long term goals. Watching the new episode was like watching a family reunion.

During the panel discussion that followed the premiere, the cast expressed great excitement at the success of the show. The packed theater was a clear demarcation that as the character’s relationships grow, so too does the community that follows them. It goes without saying that the new episode showed that the series is here to stay. It was quick witted, comical, and showed great character growth amongst the loveable and relatable cast. But “Soon By You” strives to do much more than simply portray the love lives of Modern Orthodox young adults living on the Upper West Side. My initial response after watching it for the first time a few years ago was, “wow, I can’t believe someone actually made a show about this.” While I did not necessarily see myself in the show, I unfortunately did see my community, and more than that, I heard what it was saying, loud and clear. But it wasn’t until earlier this week when I spoke to director and creator, Leah Gottfried, that I truly understood what was going on beneath the surface of the show.

Leah discussed how “Soon By You” uses comedy to get to the root of serious issues. While there’s endless dialogue around the hardships of dating and how “othering” the process can be, it’s mostly done through a comical lens that makes it clear just how ridiculous the Jewish world and the Jewish dating world can be. “Soon By You” does a great job of playing on otherwise tired Jewish stereotypes like how all women are named “Sarah” and how out of the box it is to be anything other than a rabbi, a doctor, or a lawyer. While it’s easy for us to laugh at the cliches of the Jewish world many of us are immersed in, “Soon By You” really aims to show how painful all of it can be.

When Leah first started the project she wanted to talk about the topic of the perils of dating in the Jewish Modern Orthodox community. The show became a “mirror” where some look into it and see their own lives, and others who don’t necessarily see themselves, gain a better understanding of those around them and what they’re going through. She expressed how film and media allow us to peek into the lives of others in a way that is truly unique. When you see yourself on the screen, you create a means of validating your place in reality. If people aren’t shown, then neither are their experiences. The more certain groups are underrepresented in the media, the less likely they are to feel heard and understood.

Putting stories out into the world is a great way to raise awareness. Leah shared how “Soon By You” showed many pushy, Orthodox parents how pressuring their adult children to enter the dating world may cause them great pain and discomfort. She further explained that when the all too relatable dating stories of “Soon By You” hit the internet, many parents realized what they were putting their kids through and how much they needed to step back and let them date on their own terms. “Soon By You” uses creativity as a tool to help the community gain a better understanding of the damage it causes by setting up a world where normative dating and marriage are put on a pedestal like no other. But dating and marriage are not the only serious topics “SBY” addresses.

The show sparsely touches on topics like Jewish creativity and what it looks like to be a Jewish artist. Sarah Feldman is often taunted for openly pursuing her painting career. Ben makes fun of her on their first date as Sarah desperately and symbolically rubs at the paint stain she finds on her wrist. Yet as much as she tries to erase it, she simply can’t hide who she is. In the second season, her after school art class pelt her with adult-like slurs such as “My mommy says that artists starve, do you starve?” This comedic relief touches on something extremely present in the Jewish community. Gottfried expressed that a lot of the backlash Sarah Feldman experiences for being an Orthodox artist are based on Leah’s own personal experiences. “It’s so sad that we tell our youth they can’t be artists,” Leah remarked. And it’s true. “Soon By You” exists in a land where Orthodox Jews became doctors, lawyers, rabbis, and non-profit professionals. These paths are all relatively carved out and require minimal innovation. When you’re a Jewish artist the whole world is open to you. “You have the power to forge the path you want — and that doesn’t make it any less valuable.”

Leah and I discussed how harmful these Jewish cliches can be to the real people out there trying to live their lives. Becoming a lawyer does not mean you’re “winning”, and neither does finding a human to marry. There are happy married people and unhappy married people, the same way that there are happy single people and unhappy single people. “Soon By You” shows the “Sarah Jacobs” character, who has been greatly affected by the dating game, as well as the “Noa” character, who not only doesn’t talk about dating, but shows virtually no interest in doing so until the second season. In my personal opinion, believing in the vacuum of the Modern Orthodox/Upper West Side dating game is the best way to make people feel siloed and othered as they navigate the path to self-acceptance. We’ve set up a world where people cry in bathroom stalls because they can’t seem to find the “one,” while others give up on their dreams of being artists at the risk of going hungry. “Soon By You” strives to show a lot of different things and believes strongly that what we see on the screen has the power to directly affect what we see in our lives.
The relevance of “Soon By You” appeals to a diverse group of watchers. Leah shared that non-Jewish audience members were fascinated by the peak into the subculture while even members of the Ultra-Orthodox community have been known to watch the show. While shows like “The Marvelous Mrs. Maisel” show the secular Jewish community and shows like “Shtisel” show the Ultra-Orthodox community, “Soon By You” shows the all too familiar American Modern Orthodox community and its unique struggles with things like Shmirat Negiah, the desire to move to Israel, and the art of maneuvering the dating apps. Leah and the “SBY” team believe that by taking these stories to the screen they’re encouraging the community to treat its members with the respect and sensitivity they deserve.  “Soon By You” is a testament to the power of Jewish creativity and the bridges it can build.