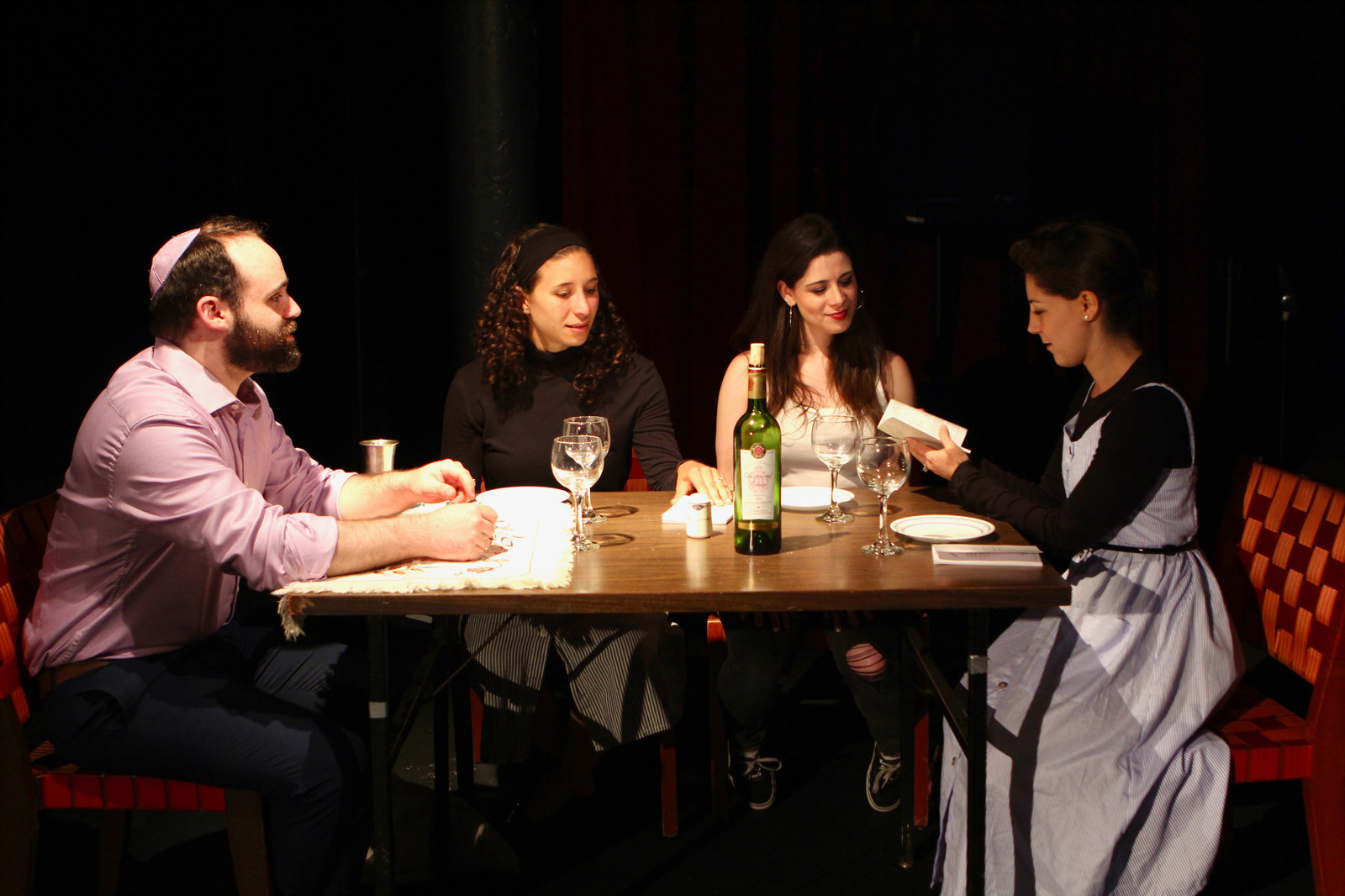 Observance: A Play About One Woman’s Journey To Be Ba’al Teshuvah

Working on Observance at FringeNYC, the New York International Fringe Festival, has been a dream.  The play follows the story of Gabby Goldblum, a hard-partying, secular college student with a painful past and an anger problem. In the play, she says goodbye to her loving, but overbearing, family as she heads off to study abroad in Jerusalem (with weed cookies in hand). Though Gabby initially clashes with her Orthodox roommate who has had little exposure to the secular world, she rapidly begins to find meaning and healing in  Judaism. She transitions full-throttle into a Ba’al Teshuvah, a non-religious Jewish person who returns to G-d and becomes traditionally observant. Her new observance creates shockwaves with her parents and boyfriend, who have difficulty understanding her new lifestyle.

I am Elyssa, the playwright.  My background is reform Judaism. I grew up on the north shore of Long Island in a town where everyone was Jewish, but no one was religious.  Being Jewish was important in our home and deeply ingrained in our identity, but my family was completely secular.

I first became exposed to observant Jews when I attended Binghamton University.  It was there that I learned about observing the Sabbath, keeping kosher, and Shomer Negiah.  I was so enthralled by the Jewish community I saw at Hillel and Chabad, and fervidly wanted to be a part of it.  I became involved in my own way, but always felt like a bit of an outsider. When I decided to write a play, I wanted to explore the idea of the Ba’alat Teshuvah.  Gabby’s journey in Observance is the one that I flirted with, but ultimately was never brave enough to go on.

I get asked a lot if Observance is a true story, and there are two answers.  On a personal note, the answer is no. My parents are divorced, and nothing like Tracey and Jim. Gabby had an older sister, whereas I have a younger brother.  I was single throughout most of college, and never became close friends with any of my roommates. The Goldblums suffered a loss that is completely unimaginable to me, and most notably, I never became observant like Gabby did. In short, these characters and these relationships are completely made up and not based on real people.

The other answer is that this is absolutely a true story.  Ba’al Teshuvah is an extremely common phenomena and this is the first time it is being explored in a stage play.  The issues that Gabby faces in Observance are ones that many Ba’alei Teshuva have to deal with. There are so many BTs who struggle to gain acceptance and understanding from their secular families. Many parents feel insulted by their children’s newfound observance and find it to be a rejection of their own upbringing.  Almost inevitably, relationships become strained and misunderstandings are had when someone from a nonreligious family begins to observe in a new way. Even those who are the most supportive of Ba’alei Teshuvah worry that the person may burn out and revert back to their secular ways, as the Rabbiezen Yael expresses to Gabby in the play.

One of the most amazing parts about Observance was working with a female creative-team.  Having females at the forefront of this project was awesome and influential in how the story was told.  To be completely honest, I initially had no conscious intention of hiring mostly females to work around me.  I wanted to collaborate with kind, supportive, creative, and intelligent artists, and somehow, the majority of us turned out to be women.  It was a happy accident that ended up being tremendous gift and impactful in the storytelling of this piece. All of the women in Observance are independent, strong-willed, intelligent, and loyal.

Observance takes an empathetic approach to both Orthodox and secular Judaism, and shows the vital role women play in the Jewish religion.  The play is uniquely sympathetic towards Orthodoxy in a time when religious Jews are often depicted negatively in film and literature. There are significantly more stories about people looking to leave the religious community than those looking to join it, and we frequently see heartbreaking stories about intolerable behavior in these communities, specifically towards women. Observance, on the other hand, sheds a positive light on religious Judaism and illustrates the reasons why a woman would find meaning and joy in becoming more observant.

Observance takes the stance that one’s relationship with Judaism isn’t all or nothing, and that there are no right answers.  There is a Judaism for everyone who wants to be a part of a community, and there are places to practice in the way that makes the most sense to the individual.

I was recently inspired by an acting teacher of mine who asks the question “who is this for” before beginning any project.  When I think about who Observance is for, it has certainly evolved over time. When we started, I wanted it to be for everyone.  It was important to me that the play was accessible to non-Jews as well as Jewish people. While the accessibility factor has remained true, what has changed is that I was forced to realize that it will not be for everyone. I was inspired by this same teacher to ask myself “who is this NOT for.”

We are living in a time where we are extremely divided as a nation, leaving little room for balance and understanding from those who see differently from us.  In that way, it is a timely story, as Observance is about finding balance and acceptance in one another, even if we disagree or have difficulty understanding contrasting points of view.  I hope that, after seeing the show, people are more open-minded and compassionate to those who live differently from them.

We are currently looking for funding for our Off-Broadway run (we have a residency offer at a theatre.)  If you want to help with that or to learn more about Observance, please email observanceplay@gmail.com and visit our Instagram page at @observancethejewishplay.  Learn more about the author and find more updates at www.elyssanicoletrust.com.