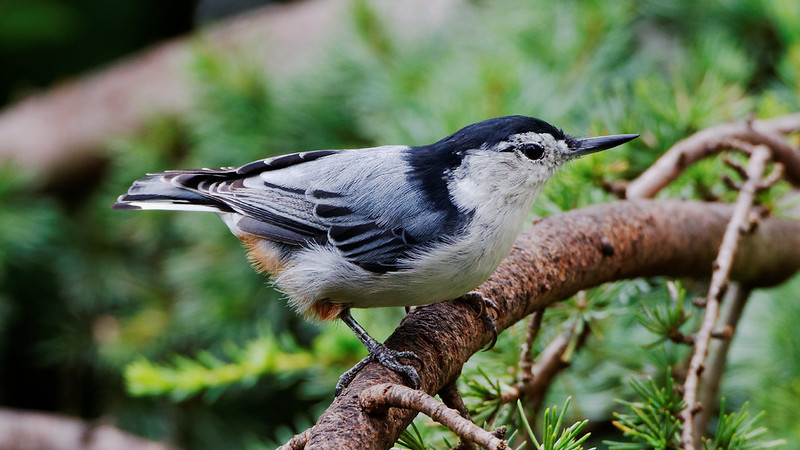 There’s no question what I must do
when a white-breasted nuthatch
greets me on the deck face up, small claws
set awkwardly grasping for the last thing he held.
Right away I know he’s dead for some time —
a bird doesn’t rest on its back, legs pointing
up rigor mortis stiff — small, spry looking,
regal, even, with a blue cap now ruffled,
proud chest sprouting tufts like an old pillow.

Magicicadas fill the treetops with processionary
cadences as I gather him like a slight shard of porcelain
in my hands, carry him down the hill to a spot under
the tallest pine tree in the yard next to where the sun
always catches the grass in the late afternoon
and burns a clean jade mirage through which
squirrels race away from Logan who never catches
them and over which as the gloaming paints all blue
fireflies sparkle bright into the early hours of night.

Three years ago to the day I buried my friend
in dirt darker than this, in a row of other graves,
his body lowered in a pine box, the shift
of weight his final subservience to avarice
and gravity under a blazing sun much like this one.
I dig this grave with my hands, moving pebbles,
roots, the exoskeleton of a cicada, soil,
red clay about a foot deep under the tallest pine
tree in the yard where the light shines like a jewel.

I lay him gently down, set upon him a soft clump
of recently cut grass and pat it softly around him
like a blanket, tucking him in to his last rest,
performing some sort of last rites, I guess, though
I may just be lightheaded from squatting too long
in the sun, the digging, the weight of holes
measured by what’s dug out rather than by what’s
broken to get to the bottom where there’s always
more to go until you just decide to stop.

Blessed is the True Judge and all, little guy, but why
am I about to cry when he’s just a nuthatch,
a bird with a funny name who lived a life I’ll never know?
I gently drizzle dirt in at first then use my palms
to shovel the remainder to fill the hole over him
and I hear the sound of the first clumps, how they
echo off the pine like a knock from the other side,
then I shake up the dirt covering the spot, I pack it in
like nothing’s ever disturbed this sacred ground.