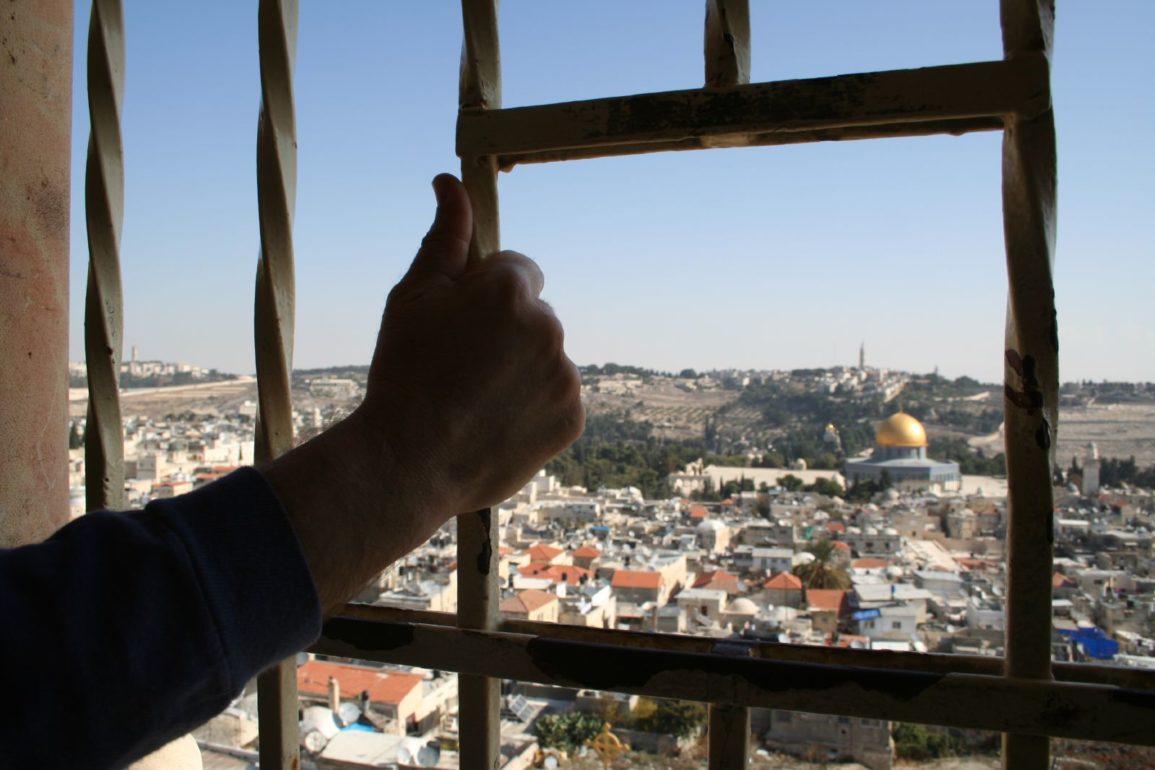 The Collision On Temple Mount

Temple Mount is a collision site. It is a paradox. It is at once the holiest site we know. And the most explosive. A place where prayers are lifted. And rocks are launched. Where firearms scatter pilgrims feet. Where calls to prayer and calls to war collide mid-air.

“Vayifga – And Jacob collided with the place…”

And the place was Mount Moriah.

Count me as one who has
collided
with this mountain,
with this gravelly amalgam
of prayer and fear.

A place so revered
for 3-thousand years
that I have no choice
but to stop in my tracks
and pay homage
to the impact
of Moriah.

And though the truth
be hidden in the conflict
and her spinning dust
yet I have glimpsed enough
to know that
this is none other than
the House of God.

And yes,
she is replete with
sonic booms
and safe rooms
where huddled children
howl as sirens sound
and war looms.

But still
this is our sacred ground.
Rattled and riddled
with bullets and shrapnel
with blood-let
and battle.

And yet it is
ironically and eternally
unruffled
by the prattle
of our enemies.

This place is our very own concoction
of awful and awesome.
Of blessing and foreboding
All folded up
Beneath us
As we sleep upon
our rocky beds
and dream.

You, God, have granted us
the vision of prophets
at this collision spot
of pain & promise.

You have opened our eyes
to behold the ladder
lapping sky
that we might exclaim,
“God was here all along
And I, I did not know.”

And so we find refuge
in this sacrament
of dirge and dirt.

And pray
at this monument
of faith
known as
“The Place”
where heaven
collides with earth.

The Temple Mount’s paradoxical pairing of holiness and conflict seems to be built into the spiritual DNA of the site itself. First of all, it is understood to be the dramatic locale of the binding of Isaac. Talk about a paradox – the archetypal loving father on the verge of slaughtering his beloved son. A trauma. A test. A shock. The second layer is then Jacob’s vision of the ladder. Dreamed atop the very rock of the near-death of his own father.

Just look at the opening verb used in the text. It reads, “Vayifga – Jacob arrived/encountered the place.” Va’yifga carries with it a punch, quite literally. For much more than mere arrival or encounter, yifga connotes a sense of collision – of two objects striking each other. It is no mistake that this verb shares its root with the modern Hebrew term for terrorist attack, pegua, and for injured– nifga.  The place itself attacked him!

It is really no wonder then that our current-day experience of “the place” is one so terribly fraught with violence, with awe and intensity. Just as Jacob collided with this spot, so too we do smash against it – politically, spiritually, emotionally. Just as this was for Jacob the site of his father’s fearful binding, and also a place of holiness and prayer, so too it is for us – a mix of multiple and conflicting things. A mere mention of Temple Mount and all are left struck, flooded, by this stunning sense of prayerfulness, awe, explosiveness, fear.

Jacob wakes up after his astounding dream and exclaims, “God is in this place and I did not know it.” He is filled with shaking and adds, “Mah nora hamakom hazeh’. How awesome, how awful, is this place, the house of God…”

All too often we do not “know” that God is truly housed here. Certainly the evening news and trends of world-opinion would say the opposite. Even the uber-holy Jacob didn’t get it! Even Jacob admits he did not apprehend G!d here. That is, not until he was hit by it. Not until that pegua of Mt. Moriah had thoroughly struck him into a state of knowing.

And so perhaps it is with us too.

We have a long religious tradition of mixing Jerusalem with prayer, with collision, with fear. The violence here, as unfortunate as it may be, is but a testimony to the fact that this place is so very full of God. Fearsomely full of God.

Yes, this place is awesome. Yes, like Jacob, our voices crack with fear. And yes, like Jacob, when we connect to the dream then we can utter an affirmation that God is here.  Even with each fresh pegua, “God is here.”