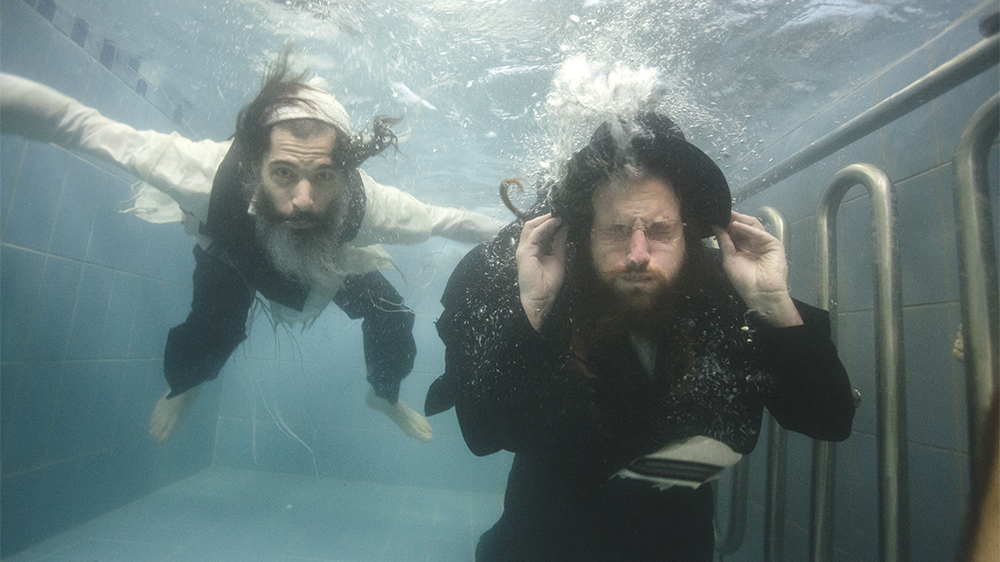 Because We Are Weird Jews

Every time I see someone on the subway reading, I get a surge of friendship. It doesn’t matter what they’re reading, or if I’ve got a book in my hand at that moment or not—I get this instant recognition, This is one of my people.

I’ve been doing that since I was a kid, finding holes in the world I can stuff myself into. I am weird. Most of the rest of the world is not. And when you’re a frum Jew, the feeling only intensifies—Here, says G-d, are 613 ways in which you should act EXACTLY like everybody else.

Someone told me that the Lubavitcher Rebbe said that the 613 mitzvos, the rules we follow, are like the meter of a sonnet. Lines A and C had to rhyme, so did B and D, there had to be five iambs in every line, a soft syllable followed by an accent. But within those hard rules, you could use any words you wanted.

That’s what being frum is to me.

A friend recently told me that, as a teenager in yeshiva, her rabbis told her something that wasn’t true. She’d learned the exact opposite thing with her brother in the Shulchan Aruch a few weeks before. She confronted the rabbi, and he said she was right, but they taught the stricter rule because, in his words, “we don’t want to confuse the girls by giving them too much information.” People are happier when they don’t have to think as much.

I spent years as a kid getting beat up for thinking too much, for being a weird kid, for existing more in my mind than in the social strata around me. It wasn’t until high school where I realized that thinking a lot could be a good thing, that thinking a different way than other people meant you could have ideas that never occurred to them, that every #1 movie in the theaters, from Star Wars on down to E.T., happened because someone had a weird idea once, and they drew outside the lines, and they didn’t let other people try to make them squeeze inside.

That’s what Hevria means to me. If we hear of a Palestinian toddler killed by Jewish extremists, if what being Hasidic means to some mentally screwed-up guy is that he needs to stab a young girl in the heart because she’s gay, there needs to be someone saying, That’s not all of us.

We don’t need to say it. We need to say other things—better things—things that we do believe in, things we think are awesome and powerful and spiritual and things that we need to fill the world with. Stabbing a 16-year-old girl is not what I think G-d thought of when we got the 613 mitzvos. But writing about the inherent holiness of pizza, or sex ed in yeshivas, or Hasidus in an apocalyptic world…that’s exactly the strictness and the bendiness that I think are inherent in mitzvos.

And maybe G-d didn’t think of those things, either. But G-d gave us the space for them, and the rhyme scheme and line breaks to express them, and (to be a little bit presumptuous and a little bit gaivadik) I think G-d’d be pretty psyched at what we did with them.

In the golden days of the internet, when people besides George R.R. Martin had LiveJournals, I was a member of a group blog called WeirdJews. This was around the time I was becoming Orthodox. I was living in DC, didn’t have many friends, was living one life six days a week and another life on Shabbos. Not everyone on WeirdJews was Orthodox—some were, some were open to anything, some were ambivalent, and some were downright anti-. But it was where I felt most Jewish, because these were people who, as much as they treasured their Yiddishkeit, the also treasured their individuality. And it wasn’t an either/or proposition, and it wasn’t a contest between the two. Rather, being Jewish, and the way they were being Jewish, was the way they expressed their individuality, their singularity, and their weirdness. And if that’s not taking the mitzvos and making them your own, I don’t think anything is.

I love the Forward. I love Tablet, and CrownHeights.info, and even the Flatbush Jewish Journal with its zany letters column and absolute refusal to show pictures of women. And I’ve written for some of those places, and I still do, and I’m really glad that they like to read what I write and share it with their readers. (And they pay me, which is really cool, and something that Hevria can’t really swing.)

At the same time, I know none of those places are my place. They aren’t weird, they’re trying to reach the masses, they’re struggling between accessibility and offering clickbait to the masses. Hevria is one of those holes in the world, a spot where I feel like I’ve got people. Where I’m just as fundamentally part of the audience as I am one of the creators. Why I’m saying this is, I’m really overwhelmed that we hit our crowdfunding goal, the first one we’ve ever tried to do. I’m happy we raised enough money to keep going, and to do all this new stuff. But I’m even happier that you’re out there—just as weird as me, or weird in your own way, or not weird at all, but excited to see what new and strange things we’re up to. (Except, really, you are weird. Trust me on this one.)

Cover image: still from the movie Sacred Sperm by Ori Gruder, an Israeli baal teshuva whose documentary about following halacha is a lot less sketchy than it sounds.