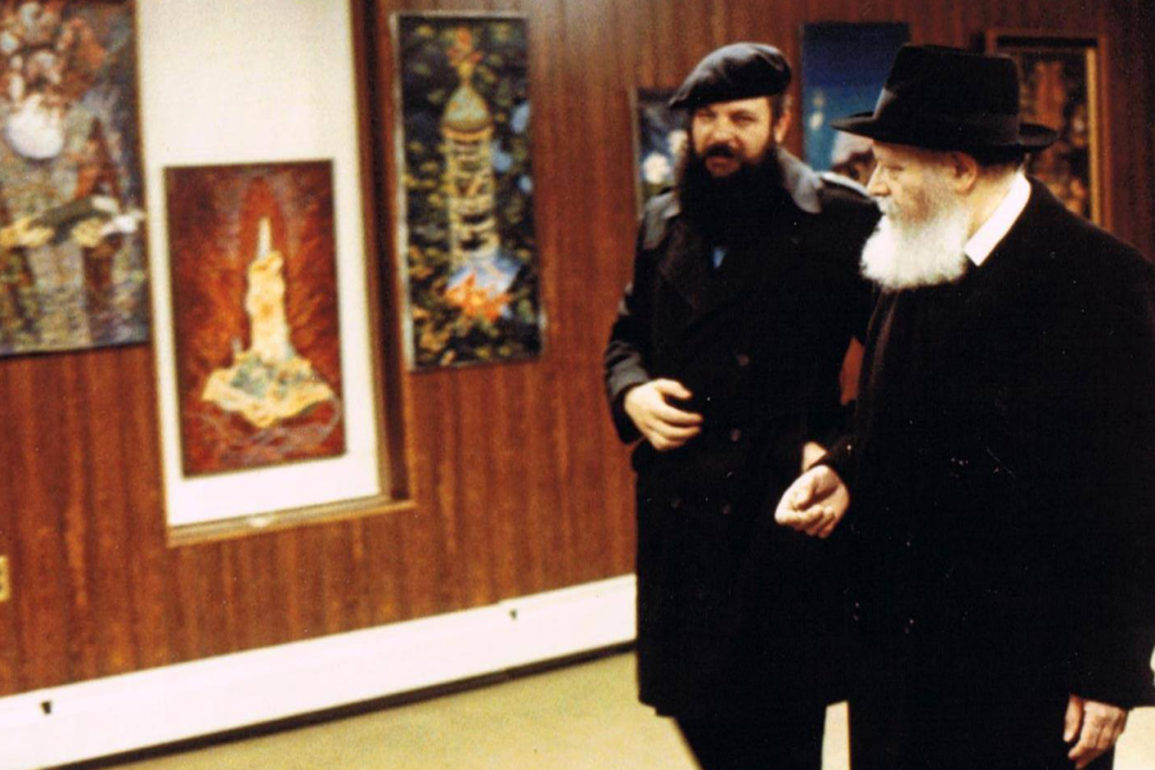 The Rebbe Must Have Known What Was Coming

They keep telling me what he knew and what he didn’t know.

And I wonder if that’s how he wanted it all along.

When Baruch Nachshon showed the Rebbe a painting of the Rebbe on a donkey, implying the Rebbe was the Messiah, the Rebbe just laughed and moved on.

He didn’t say yes or no, he just laughed.

I wonder, I wonder, if it was all part of his plan.  This ambiguity.  This “Yes and no,” way of addressing reality.

I wonder because since I walked away from being a “full Lubavitcher” I’ve never felt closer to him.  And I have had trouble figuring out exactly why.

Except that was what he wanted all along.

The Rebbe was a genius, something that even his detractors can’t deny.  His volumes upon volumes of Hasidus are enough to prove it.  But then there’s the fact that he turned a rag tag group of Jews living in Brooklyn into a global phenomenon.  He took black hats out of the ghetto and into the streets, into campuses, into towns where no rabbi would dare tread.

And so, his mind seemed to work in a million ways most of even his most ardent supporters aren’t aware of.

That we’d then go into the orthodox world and start looking for everything we can fix.  Because if we didn’t, we’d leave, because we were promised more.  The Rebbe promised us more.

And so we realized that it was our job to do the changing, if others wouldn’t.

People who don’t fit in.  Who never will, until they create the culture that fits them.

The Rebbe must’ve known.  He must have.  That the ultimate result of bringing a bunch of people who have grown up learning about civil rights movements, about humanism, about individuality… that many of them wouldn’t fully buy into his own system, even if they wanted to.

He must have known that sending the rabbis out meant bringing in people who wouldn’t accept the status quo.

And yet they tell me, no, the Rebbe just wanted us to be like him, to be like them.  To fall into line.

He knew we were coming.  He knew it, because that’s the exact reason so many others didn’t do outreach before he came along.  Because they didn’t want the troubled kid getting the house dirty when he came over, and having a bad influence on their children.

Did the Rebbe think it was simply necessary to do that?  That it was about sacrificing people for other people?

Why else would he encourage Rabbi Jonathan Sacks, who holds so many contradictory views to his own, to become a “leader” in Britain?

Why else did he demand his rabbis treat secular Jews like “kings”? (Sometimes I think people thought he didn’t really mean that one).

Why else are we here? In our current situation, with so many Jews who don’t fit into the imposed vision of their leaders?

I think outreach was just a cover for his larger vision: changing all of Jewry.  Forcing us to rub shoulders until, like two people pushing against each other to gain leverage and go up together, we rise and rise and rise together.

I think he wanted the different people just as much as he wanted the people who joined and would fit in like puzzle piece into its slot.

He knew it all.  And whether it was because he was a seer or a genius, it doesn’t matter.  Anyone who was able to see how sending rabbis all over the world would transform Jewry, who could build a network and knowledge base that was focused on turning the world inside out, who could do even one of the miracles attributed to him…

He knew what he was doing.  It was meant to be like this.

And whether the people that say they follow him believe it or not, we’re here to stay, and we’re changing more not less.  We’re transforming ourselves in the image of God, not Chabad, or any other group that tries to claim ownership over us.  We’re fixing more, not less.  Voices rising about agunahs, about abuse, about more.

It’s only the beginning.  Only the beginning, as we connect with the others within the Rebbe’s own home who feel the same.  The people around the world who see orthodoxy for what it is.  The people who fit into the box but see the value of those who laid claim to the land outside of it.

Rebbe, I know what you want of me, and I will follow you even harder than I did before.  I love you, even though I don’t agree with every word you said anymore.  But I think you wanted that from me in the first place.  I think when you spoke to me, you knew what was coming.  I think when you guided me to stay in your neighborhood, even though I wanted so badly to escape, to run away, to never be around this group of people again, you asked me to stay for a reason.

Rebbe, I love you.  We love you.  And we’re just as imperfect as the people trying to make us fall into their worldview.  But we know that you wanted more from us than they could even imagine.

Rebbe, thank you.  Thank you.  Because I’m no longer afraid to tell the world what I’ve felt about you for so long.